Labour’s shadow minister for industry Iain Wright this week used the launch of the CIOB’s report on migration at the House of Commons to outline his priorities on construction if Labour forms the next government – including seeking policies to improve profitability and margins along the supply chain.

Speaking to Construction Manager, the MP for Hartlepool said: “I’m interested in the structure of our industry. When sectors do well, there’s often alignment and long-term perspective is in the supply chain, I worry we’re not achieving that because of fragmentation.

“Margins are squeezed and firms don’t have the ability and long-term perspectives to invest. So how do we tackle this together?”

In the first weeks and months as a minister, Wright said that he would convene a discussion with the industry on these structural failings, while also supporting the current drive to improve access to public sector contracts for construction SMEs.

“I don’t think that improving coordination and expanding competition are at odds. In the aerospace and automotive sectors, you do see that alignment and coordination of the supply chain. So we have to work together, but it has to be industry-led.”

Wright was joined on the podium by Nick Boles, the government’s minister of state for skills and equalities and construction minister, and Gordon Birtwistle MP, the Liberal Democrat ambassador to business for apprenticeships. 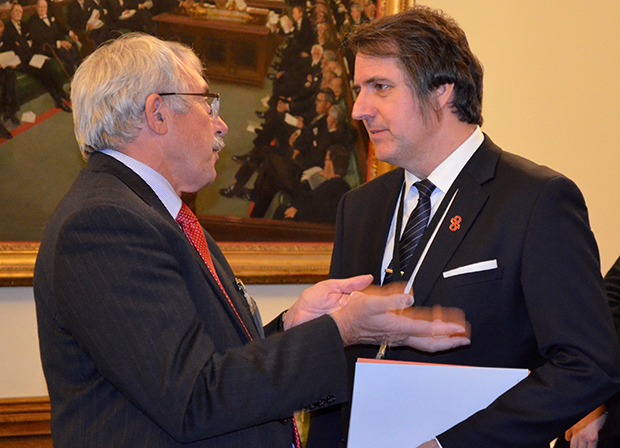 All three threw their support behind the CIOB’s drive to boost training opportunities for young UK nationals, one of the themes of CIOB Perspectives: an analysis on migration in the construction sector.

The event was attended by around 20 MPs and parliamentarians, including Labour’s Steve Rotheram MP, a former bricklaying apprentice who recently demonstrated his skills on the BBC documentary Inside the Commons.

In conversation with CIOB chief executive Chris Blythe, the two discussed whether or not the crumbling Houses of Parliament – which need a £3bn upgrade – could be rebuilt using the workforce and skills of today.

Wright also told Construction Manager that he fully supported the Construction 2025 industrial strategy, the BIM agenda and “emerging technology as a driver of productivity”.

“Where the Industrial Strategy is interesting is with the buy-in with industry, it’s not top-down, imposed by Whitehall – that’s not going to work – and I like the long-term aim to 2025. The four targets are somewhat challenging, but I think they are achievable.

“I’m very conscious of the fact that the political cycle is at odds with the construction cycle – if you invest in skills now, you want a good pipeline of work ahead of you but you know you’ll only see the benefits in ten years. So we’ve identified the sector as a key sector and having a long-term view is the way to go,” he added.

He also acknowledged the CIOB’s contribution to raising awareness of construction issues among politicians. “I think they’ve moved on in leaps and bounds in the last few years and have huge influence with parliamentarians and policy makers.

“What the CIOB has been doing in addressing the skills shortages in the industry and discussing migrant labour and boosting training is incredibly sensible.”