Offsite: The making of modular 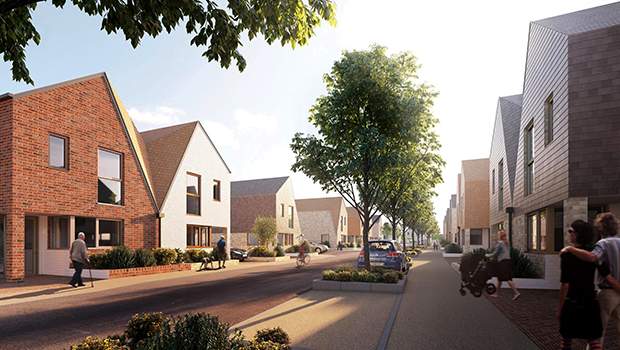 After years of predictions that modular construction will be the next big thing, Denise Chevin reports on why Swan Housing Group is committing to a factory to build new homes, and why the Portakabin Group isn’t.

The march to offsite construction is picking up pace and right out in the front is Swan Housing Group. The Billericay-based housing association is investing in a factory to provide new homes for the next phases of a major estate regeneration. Impressively, Swan will harness the production process to customise the internal layout to suit the buyer, very much in the same way as car manufacturers build to order for particular models.

The decision to invest in the offsite production facility was borne out of frustration with existing construction methods and a determined belief that there had to be a better way to build. Matters had come to a head after work on the recently completed second phase of the regeneration of the Craylands Estate near Basildon ran late and over budget.

Swan has been partnering with the local council to transform the notorious 1960s estate on the outskirts of the town into Beechwood Village since mid-2000, completing the first tranche of new homes in 2010.

Over a period of more than 20 years existing houses will be demolished and more than 1,000 built in their place, providing homes for shared ownership, social and affordable rent and for sale.

To date 400 have been built on the estate using traditional methods with another 570 planned in the next five years using offsite construction. Around half of these latest homes will be for sale and half for custom build – more bespoke units for buyers – playing to the strengths of a more automated process.

Doing it for themselves – offsite factories

West Midlands HA Accord Group has been producing timber frame factory-built homes through its Local Homes subsidiary since 2011. The factory has produced 400 homes and Accord is reported to be looking to franchise the business.

Institutional investor Legal & General is investing millions in a new factory in Leeds to produce 3,000 houses or 4,500 flats a year for private rental. When it is complete next year it will be the largest manufacturing facility in Europe.

Meanwhile, Berkeley says it could step up production of its Urban House design – a modern day version of the back-to-back terrace. The first two streets of 22 homes have now been built at Kidbrooke Village at Greenwich in London, while others are on site at Green Park Village in Reading.

After his experience with the second phase, Geoff Pearce, executive director of regeneration and development, decided to look for an alternative. “We’re not typical of a housing association in that we have our own in-house construction team to oversee our developments, rather than using a main contractor to carry out the work,” says Pearce. “The second phase was delayed because we struggled with suppliers, plus poor performance and bad weather. The work took longer than expected and cost more than planned. So we started to look at modular.

“First, we looked at the existing suppliers and engaged consultant Potter Raper to a do a study for us. We concluded the existing market was not quite big enough for us to guarantee supply, and it was more expensive.”

Pearce says that costs for offsite compared to traditional construction were being pushed up due to a number of factors: factory overheads in terms of business rates and rents, which do not apply when building on site; higher margins (double those of traditional contractors); and contingency costs to cover the downtime in the factory brought about by delayed orders.

“Because the suppliers weren’t the end-developers, they never had control over the production line. It occurred to us that if we took control of a factory we could reduce some of these costs.”

Swan is renting space at a production facility, essentially a large warehouse, which will be completed in November. The operation forms part of NU Living, Swan’s commercial sales and custom-build arm. The 40-strong group which will eventually form the factory team will assemble around 100 homes a year – though the factory space has the capacity to do three times that many, says Pearce.

Swan has invested £3m in set up costs and has guaranteed the factory £30m worth of orders for the 570 new homes for Beechwood. It has also brought in production specialist Paul Williamson to run the new division.

The modular units will be assembled in Swan’s new factory from cross-laminated timber panels imported from Austria. Architect PTE has designed the housing and Ramboll is the engineer. Each home will be made up of between two and six units depending on the size. “We’re projecting cost savings of around 5% on our development costs,” says Pearce.

"There is more acceptance of offsite but I’m not sure how it stacks up outside London and the south east, where it is still probably cheaper to build traditionally."

As well as building its own homes Swan is keen to interest other housing associations and councils in its offsite product. “We’ve already attracted a lot of interest, but we want to make sure that it all works and we can deliver our own first.”

Swan currently has about 1,000 homes being built on site in Essex and the south east, but the nature of some projects will mean that offsite may not be appropriate.

In terms of the custom-build aspect, Swan’s architects PTE have drawn up a design code from which customers will be able to choose from a menu of external materials – such as bricks, render or tiled cladding – windows, and internal layouts.

Though modular and offsite have been gathering pace, the number of homes built this way is starting from a low base. A survey by Buildoffsite, while not purporting to be definitive, shows MMC gaining traction and probably accounting for between 15-20% of all construction. This is up from 6-7% of the market when it was set up in the early 2000s. So has a tipping point been reached?

“I would say there is more acceptance of offsite but I’m not sure how it stacks up outside London and the south east, where it is still probably cheaper to build traditionally,” says Pearce.

“I think it’s also very difficult for suppliers who aren’t the end developers because of the stop-start nature of house building. Projects get delayed and then the orders don’t come through. That’s why we feel there is much more chance of success with developer and supplier being one and the same.”

Could government help to promote modular? “Yes. For example, it would grow confidence in the sector and capacity if they could link the release of public land to employing modular construction, or if HCA or GLA grant funding could be tied to it. Encouraging local authorities to offer reduced business rates on premises used for offsite manufacturing would also help.”

Some good news could be on the horizon. Speaking at a conference in September housing minister Gavin Barwell said that the Home Building Fund, announced in this year’s budget, will, as well as providing loans to support small and medium-sized developers, also be used in some way to back modular.

It’s not just housing where there is an increased acceptance for modular construction. Austerity is driving the public sector to look for greater budget and deadline certainty. Health and education bodies are increasingly turning to the turnkey offsite option, says Kevin Jones, director of business development at Portakabin, the £250m-a-year modular specialist.

Last year, Portakabin scooped the £28m modular framework from the Education Funding Agency to build seven primary schools in Surrey and Kent and is expecting the EFA to bring a further three modular frameworks to the market.

The firm has also seen great take-up in the industrial sector. It recently completed a new facility for Totally Wicked, which manufactures e-cigarette liquids, for example. 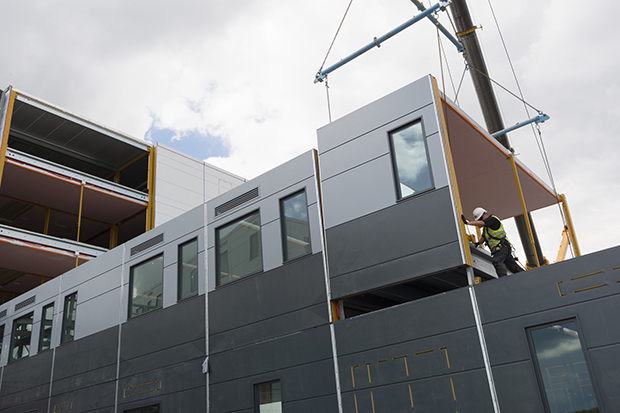 Aligned with a greater volume of contracts, there is also a trend for contracts for modular buildings to become bigger, as clients increasingly mix and match technologies. It’s no longer uncommon to combine fitted out modular solutions with steel frame and prefabricated panels, says Jones. One of the largest contracts Portakabin is involved with is the £44m Riverside Campus (pictured under construction) for the 0-19 school for Barking and Dagenham for 2,645 children.

Despite being an established modular solutions supplier, Portakabin is steering clear of housing, pinpointing the issues highlighted by Swan’s Geoff Pearce. The stop-start nature of development makes it hard to predict demand and ensure production lines remain busy.

And for Portakabin, going into housing would necessitate investment in a new production line and, says Jones, “we’re not sure we’d make the same return”. The EFA deliberately went out to tender for a batch of schools and gave the contract to one supplier to provide continuity and scale, he adds.

“There’s certainly a great deal of interest in housing, particularly in the light of what L&G is doing. We’ re waiting to see what happens,” he says.