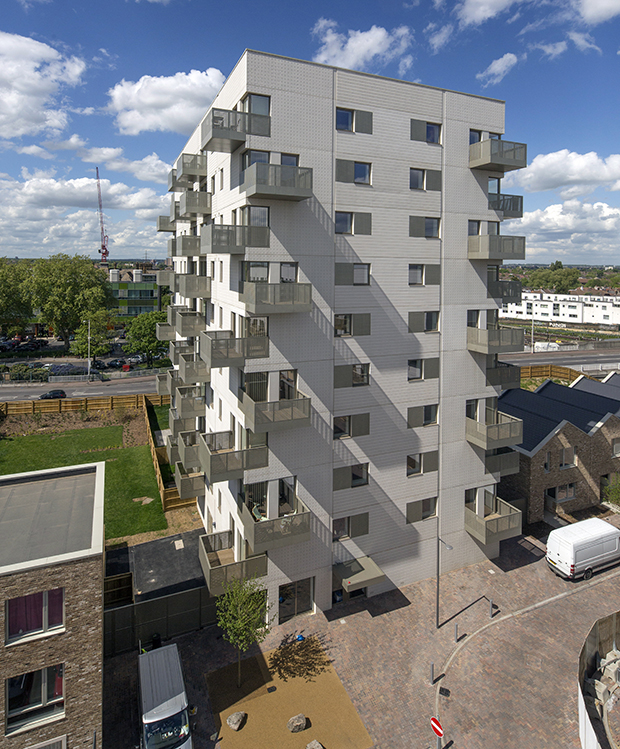 Construction projects are typically a hive of activity in the weeks approaching practical completion, but there is an eerie calm on site at William Street Quarter, a pioneering £34.25m development of 201 affordable homes in the centre of Barking, east London. There are few finishing trades to be seen around the scheme’s three apartment buildings and low-rise brick terraced housing. Apart from the occasional whirring of a hand drill, all that can be heard is the echo of footsteps as CM is led on a site tour by Laing O’Rourke’s construction manager Michael Leeks and project leader John Fuller.

The reason is the chosen method of construction. Around 71% of William Street Quarter has been delivered using innovative offsite construction techniques to speed up project delivery by around a third (compared to a traditional build) and improve quality for the client, the London Borough of Barking & Dagenham Council. 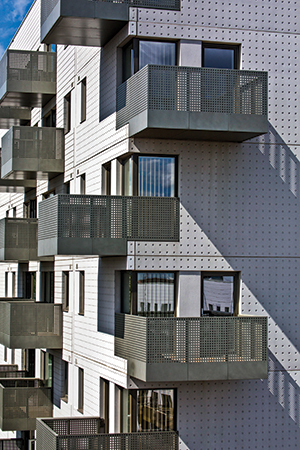 Laing O’Rourke has been promoting DfMA since 2009, using it to construct Barking’s award-winning Dagenham Park Church of England school in 2012, and more recently forming part of the pre-fabrication solution for Sir Richard Rogers’ Leadenhall Building in the City of London. However, William Street Quarter is the first project to include such an extensive suite of DfMA products.

The precision engineering, speed of construction using a site-assembled “kit of parts” and relative cheapness make it an ideal solution to addressing the country’s urgent housing needs, argues Steve Trusler, head of accommodation at Laing O’Rourke and a recent high-profile signing from Wates: “The industry is delivering about half of the numbers needed, which means finding new delivery models and we’re showing how to do that.

“A lot of clients would say that offsite is still a cottage industry run by small companies with limited investment going into factories, but even through the recession we have ploughed over £100m into our product in facility at Steetley. Our philosophy is to use offsite manufacture wherever it is intelligent to do so, because there are so many good reasons for doing it.”

William Street Quarter stands on a 2.5 ha site previously occupied by the notorious Lintons Estate, demolished in 2008. Three mews streets providing two- and three-bed family-sized brick terraced houses line the site’s perimeter, around a 10-storey tower of 76 one-bed apartments. Two six-storey “mansion blocks”, which face each other across a main pedestrianised “boulevard”, provide 39 and 45 three- and two-bedroom duplex apartments respectively. The ground floor flats at the rear of the mansion blocks have small gardens, which open out onto larger communal courtyards. 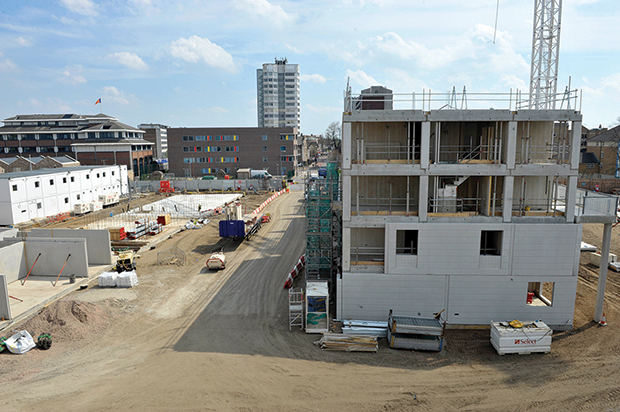 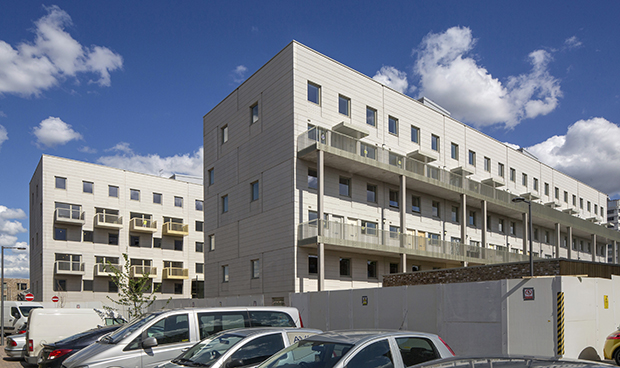 This is the second phase of development on the site: in phase one, completed in 2011, 31 two- and three-storey mews houses were built using traditional bricks and blocks. Both phases have been designed by architect Allford Hall Monaghan Morris (AHMM), although Laing O’Rourke only built phase two. For the second iteration of the low-rise housing, AHMM chose to adopt the same look and typology, but replicate it using an offsite timber-framed system, supplied by Kingspan Potton, clad in a single layer of traditional brick.

All the timber floor cassettes and the Structural Insulated Panels (SIPs) for the walls were delivered to site flat packed and screwed into place by Kingspan’s team. In addition, the roof structure was assembled on the ground and then craned into position, which limited the amount of working at height. “We were very pleased we managed to design something that doesn’t look pre-fabricated at all, but actually is,” says Christian Moore, project architect at AHMM.

Meanwhile, the two mansion blocks are modelled on stacked Georgian town houses, of which there are several in the borough, clad in horizontally-banded shot-blasted pre-cast concrete panels, with projecting balconies, deep reveals and generously-sized windows to break up the uniformity. The same system was applied to the tower’s facade, where the large cladding panels feature a dimpled pattern.

What’s immediately striking is the starkness of the grey/white facades, which are rigidly laid out and feature very little colour, apart from light green window frames and balconies and front doors in subtle shades of yellow and grey. This austere look seems at odds with the desire to create a building that doesn’t look like it has come off a production line, but AHMM’s Moore says the building takes its cues from its primary material. 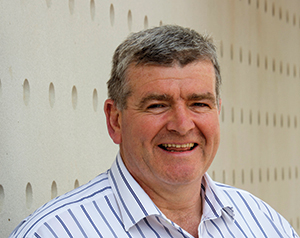 "SmartWalls are pre-formed, robust, pre-treated for weathering, and all you have to do is drop them in by crane."

“The ‘minimal’ design is a direct response to the concrete. Rather than play with colour we wanted to play with its characteristics by sculpting it in the factory and using the dimples and horizontal banding, to create interesting shadows,” explains Moore.

Each pre-cast cladding panel is one storey high and the width of one apartment and was delivered to site pre-installed with windows and doors, both supplied by NorDan, as well as architectural metal vent panels. Delta Fabrication’s external metal and timber balconies were delivered separately, then clipped to the facade panels on site prior to being lifted into position and bolted to the concrete frame. “This was a huge step forward in terms of speed of erection, it meant that no scaffolding was required
on the mansion blocks or the tower, improving safety related to working at height, and it gave us much greater control over tolerances,” says Moore.

Similarly, the staircases were built offsite then delivered by lorry. The architectural balustrades were delivered separately, then bolted to the staircases on the ground before being lifting into position, creating edge protection and again removing the need for scaffolding.

Most of the DfMA elements, including the cladding, structural concrete columns, planks for the external walkways and sections of “TwinWall” were manufactured in Laing O’Rourke’s Explore Industrial Park (EIP) facility in Steetley, Nottinghamshire. Laing O’Rourke subsidiary Bison fabricated the hollowcore floor slabs and staircases at its factory in Swadlincote, Derbyshire. The in-house direct delivery approach also extended to the supply of cranes, plant and equipment – provided by subsidiary Select Plant Hire – and groundworks and utilities installation.

“Although we still use some subcontractors, we are employing more direct labour so we are in control,” says Laing O’Rourke’s Trusler. “Customers want cost and delivery certainty, which is very difficult to achieve when you have a dwindling and unreliable supply of skilled labour.”

The use of TwinWalls helped cut down the amount of concrete wet trades on the job by providing a pre-formed external shell of a structural concrete wall with steel lattice already inside for reinforcement. “The TwinWall came in sections of up to 6m long to 1.5 storeys high and was also used to build the concrete stair and lift cores,” says construction manager Michael Leeks.
“All we had to do was lower them into position then fill the centre void with concrete. You’re basically getting a structural wall that is its own formwork and reinforcement, and when the wall has cured you don’t get any shuttering pattern on the surface.”

Meanwhile, the SmartWall partition walling system has high fire resistance and acoustic insulation properties and was delivered to site complete with electric fittings, tracks and head plate. Each unit was dropped into position alongside the superstructure in a much faster process than traditional drylining, which typically involves building one side of the wall, installing timber noggins, bringing in electrical engineers to install and test their kit, closing up the wall, then taping, joining and decorating.

“During the drylining process, huge sheets of plasterboard are moved through the building and a lot of waste is generated,” explains John Fuller, project leader at Laing O’Rourke. “In contrast, SmartWalls are pre-formed, robust, pre-treated for weathering, and all you have to do is drop them in by crane. Environmentally it has reduced the amount of noise and dust created by saws and vibrators etc, improving site safety.”

Not to mention time-saving: as a result of installing the various DfMA solutions at William Street Quarter, Laing O’Rourke was able to build each floor in the tower block in one week using a team of just six operatives, with the mansion block floors taking slightly longer.

However, the technology raised challenges in terms of the need for greater emphasis on design prior to manufacture, and the complexity of managing deliveries and installation. “You need to front-load a bit more in terms of coordinating the design and the margin for alterations in the later stages of the build is very little,” says AHMM’s Moore. “The M&E has to be sorted very early on, especially using systems like SmartWall where all the switches and socket locations must be finalised before fabrication.” 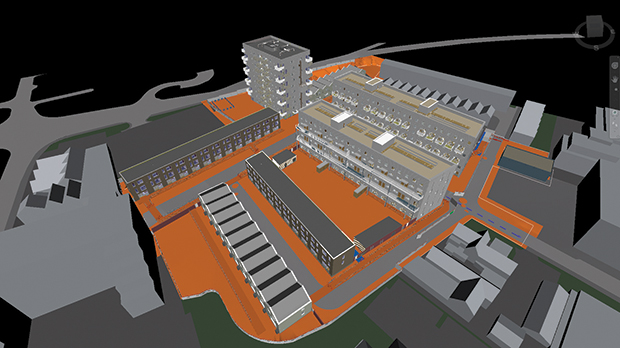 “There are things we would do differently next time around,” adds Steve Trusler. “Logistics management and coordination could have bedded in much faster. For example, some of the windows were specified on a longer delivery time than was required for us to get the first facade panels on site, and the delay meant reprogramming work. During the first 10% of the project there were things that needed rescheduling. But overall things have run very smoothly and the overall project is due for completion two weeks ahead of schedule,” he points out.

The tight 82-week programme also piled on the pressure for site manager Leeks, who had to coordinate the assembly of numerous offsite systems and lifts using three tower cranes on three separate buildings simultaneously.

“The hardest aspect was juggling deliveries,” says Leeks. “When you’re trying to complete one floor a week, it’s no use if an element turns up a day late when the next floor is due to go on. That was the biggest head scratch and a few choice words were used here and there when the pressure was on,” is his leave-it-to-the-imagination conclusion.