The UK’s tallest timber tower, in Hackney, is a hybrid of cross-laminated timber and steel. But are the gains balanced by sustainability trade-offs? Tom Ravenscroft reports. 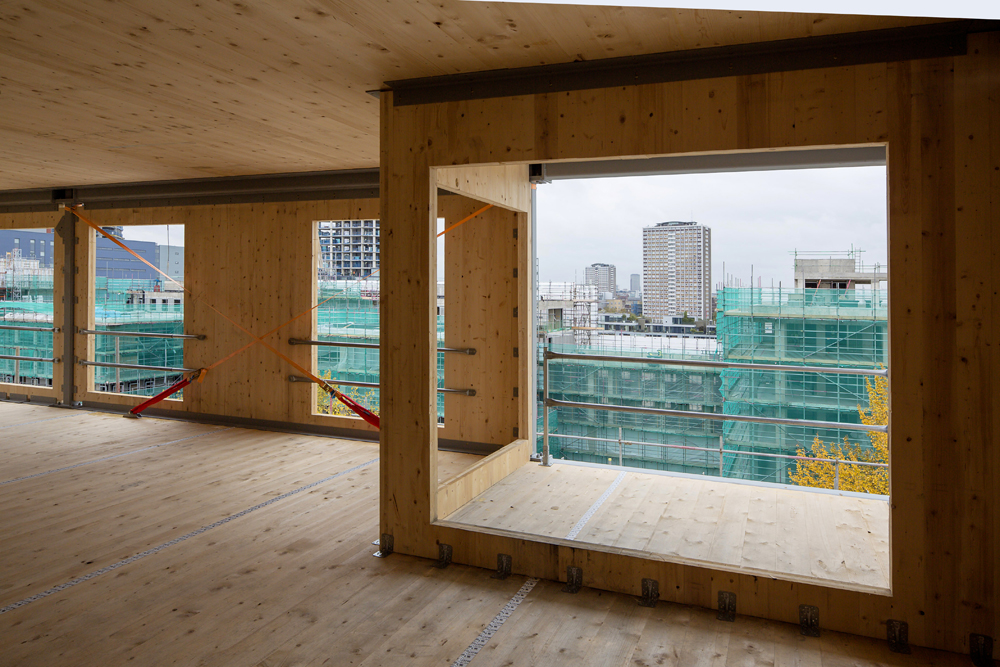 When architect HawkinsBrown’s 10-storey 17-21 Wenlock Road residential scheme in the London Borough of Hackney topped out last November, it took the title of the UK’s tallest cross-laminated timber building from a nearby nine-storey residential block by architect Waugh Thistleton on Murray Grove. But unlike its nearby rival, this latest timber tower is not a pure CLT structure. Instead, it’s a hybrid of steel and CLT – a system the architect says allows for greater structural gymnastics, opening up more complex building forms that go “outside the box”.

But introducing steel into the mix naturally adds embodied carbon and dilutes the sustainability credentials of a pure CLT project. Plus, it’s pointed out that the airtightness benefits of CLT are dramatically reduced, while adding more materials and trades on site impacts on the programme benefits.

So are hybrid structures such as Wenlock Road an evolutionary cul-de-sac in the search for more sustainable construction methods? Or, for a city that is seeing a boom in high-rise construction, with 117 towers ready to start on site after winning planning in London, do hybrids offer a practical way to sustainably build tall? 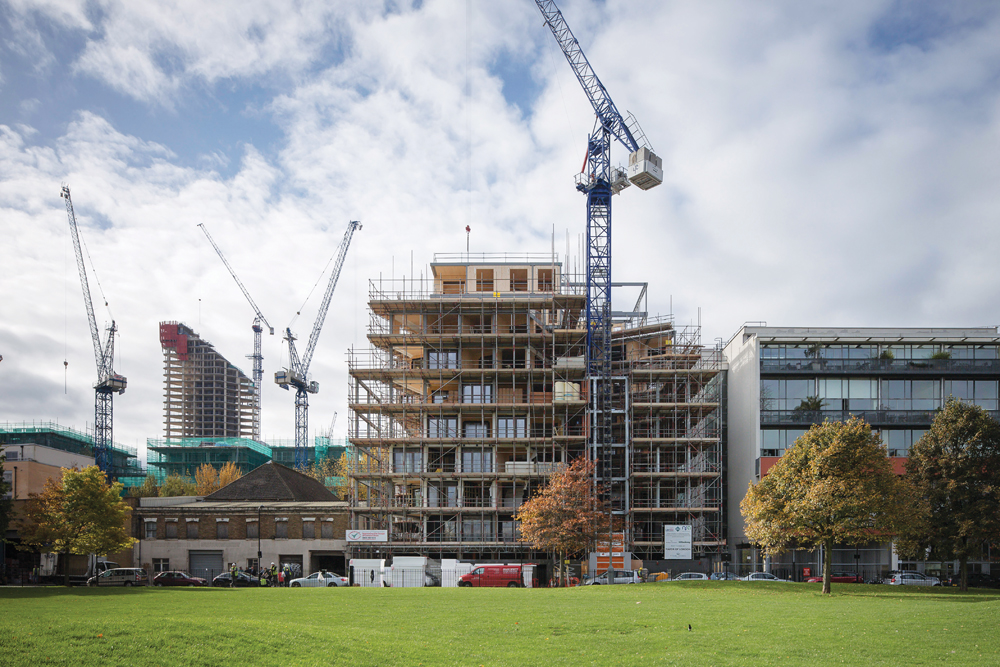 HawkinsBrown’s concept design for Wenlock Road was not initially designed as a timber project. The starting point was its unique form: a cruciform tower, with floor plates that twist every two floors, designed to achieve as many high-quality flats as possible on the site. Its twisted shape allows daylight, ventilation and views into the depth of the plan and means that all 50 residential units benefit from at least two or three aspects.

Aware that Hackney actively encouraged the use of timber, HawkinsBrown mentioned in its design and access statement that it could potentially be developed in CLT. In fact, as the building progressed through the planning process in 2012, Hackney mooted a “timber first” policy, although this was later watered down in the face of potential legal threats from the steel and concrete lobby. Nevertheless the decision was made by the developer, Regal Homes, that the tower should be constructed from CLT. 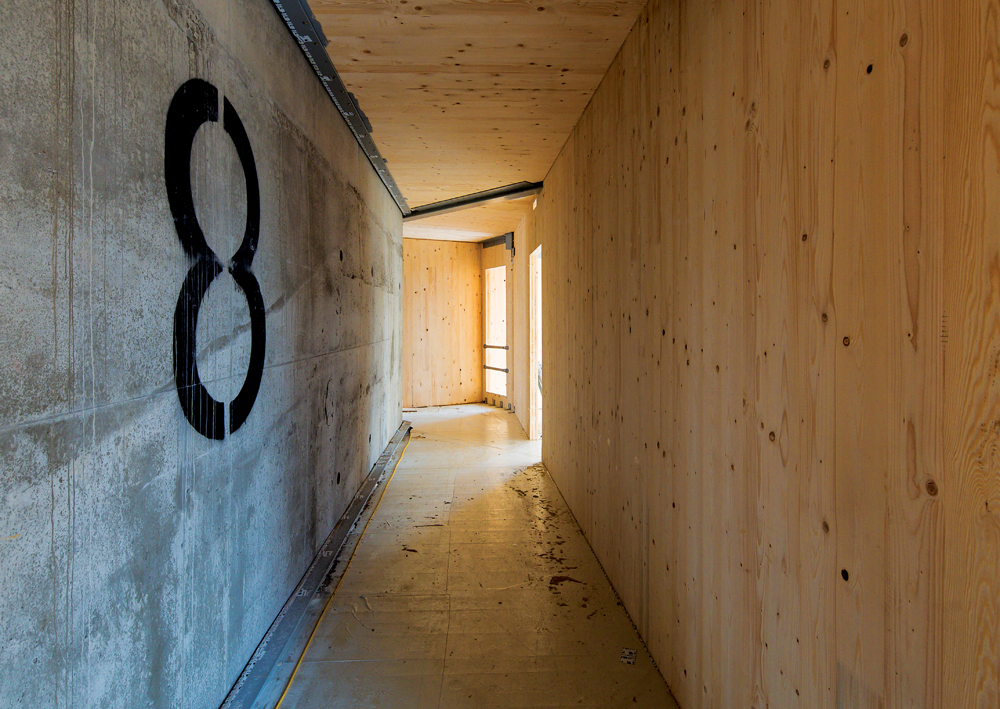 In collaboration with CLT contractor B&K Structures, several options were evaluated in terms of cost, efficiency and aesthetics, including a pure timber solution with all internal walls of the structure formed in CLT. However, due to the complex form and the extremely thick slabs that would have been needed to create the cantilevers, this option was abandoned as too heavy and too expensive.

After also considering a glulam hybrid, HawkinsBrown settled on a hybrid of steel and CLT, wrapped around a reinforced concrete core, as the most efficient solution. The box section columns that make up the building’s steel frame are either 200mm sq or 160mm sq, which are very thin for a 10-storey tower. This is due to the fact that the CLT, which by volume makes up 90% of the building, is still playing a major structural role.

“In its current design it wouldn’t stand without the steel or without the CLT,” explains project architect Alex Smith. “The building’s twisting is a key part of its design. Introducing comparatively small amounts of steel to share the load in key locations allowed the complex form to be created in an efficient way.”

Although a pure CLT would arguably be more sustainable, Smith is pragmatic about adopting a mixed approach to the frame. While appreciating the low carbon benefits of CLT, he says: “I don’t see the benefit of cutting down more trees just to build a pure CLT building. If you can stiffen something with steel, use less material and make a more efficient structure, that makes sense.” 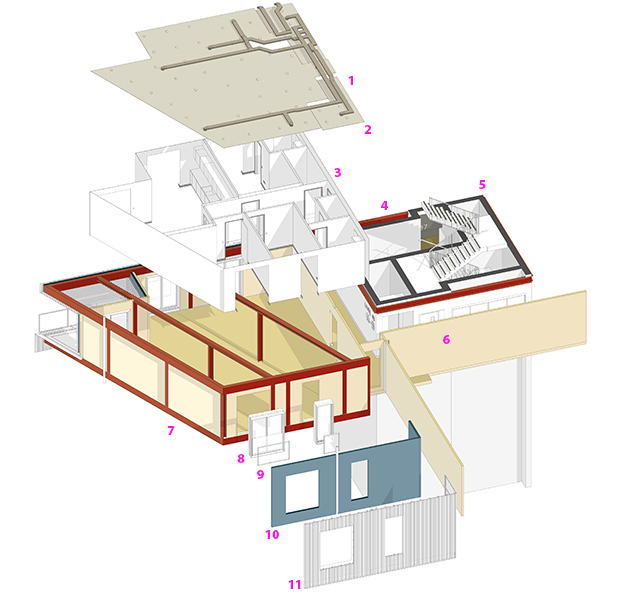 As a building material, CLT is becoming increasingly common in the UK, with its sustainable attributes as the main driver for its uptake. The renewable material, sometimes described as super-plywood, is formed from layers of spruce arranged crosswise and glued to create high-strength panels.

On site, there are substantial speed and cost benefits as CLT is a prefabricated material. The wood’s compact layering also provides high levels of airtightness, substantially reducing the amount of energy needed to heat buildings compared to concrete-framed buildings.

These advantages were exploited heavily on the Building Schools for the Future (BSF) programme, with the material being ideally suited for low-rise construction with tight timescales and budgets. (Willmott Dixon’s St Agnes primary in Manchester – based on Eurban’s CLT system – is often cited as the UK’s first “flat-pack” school). CLT construction is now established in the education sector: HawkinsBrown won a 2014 RIBA Award for its exposed CLT project at Hilden Grange prep school in Kent, also designed by project architect Smith.

The London Borough of Hackney has in fact become a testbed for housing schemes made of timber, with Waugh Thistleton’s Murray Grove block the tallest CLT building in the world when completed in 2009. It was followed by Karakusevic Carson Architects’ 41-unit Bridport House in 2011 and now there are numerous CLT housing schemes on site in the borough. So, it is no surprise that Wenlock Road – the latest building to be pushing the boundaries of timber construction – is also to be found in Hackney.

Externally, the building is clad in western red cedar, with a dark brick grid used to define the street edge. Internally, because of Part B of the Building Regulations, which state that the building’s structure must retain structural integrity for 90 minutes in the event of fire, the CLT elements have to be completely covered with fire-retardant dry-lining. With no visible CLT in the finished product and its unusual twisting form, HawkinsBrown has created a complex design that does not have the look or feel of a standard timber building.

A twist in the strategy

A conventional plan has been replaced by a cross formation, creating more courtyards. The floorplate is then twisted every two storeys, to maximise light, and wrapped in a gridded screen to simplify the street frontage.

As Smith says, approvingly, “this is not a CLT-driven form”. In his view, hybrid solutions allow for more non-typical
CLT-shaped buildings to be created, maintaining a sustainable agenda while allowing the architects and structural engineers latitude to experiment structurally. “Sustainability should not be a restriction on ambitious design. In the future you will find that there will be more hybrid structures,” he concludes.

But not everyone shares Smith’s mix-and-match philosophy. Andrew Waugh, director at Waugh Thistleton Architects, a long time proponent of CLT, believes that only pure CLT-framed structures can realise the full benefits of the material. A pure CLT residential development, also for Regal Homes, designed by Waugh has started on site on Dalston Lane, again in Hackney. It has a world-beating 3,852cu m of CLT in its frame, and will also be the UK’s tallest CLT structure when completed.

Waugh argues: “We should avoid using steel and concrete and use timber wherever it is feasible. It has a low carbon footprint, is replenishable and stores carbon.” He also warns that hybrid structures can “undermine a number of other benefits of CLT, such as airtightness, and the lack of differential movement – timber is fast and straightforward, so introducing other materials and trades loses that advantage”.

He accepts, however, that hybrids have a place – but sees it as a temporary one. “There are times when steel and concrete are useful and at the moment hybrids work within current regulations and knowledge bases,” he says, viewing hybrids as only an intermediary step until the industry builds a fuller understanding of timber construction. “To get the full benefits of CLT for mass housing, pure CLT is the only solution,” he says.

Meanwhile Craig Liddell, specification manager at B&K Structures, the specialist contractor that has designed and built both Wenlock Road’s hybrid structure and Dalston Lane’s pure CLT structure, certainly believes that both methods have merit. “When we design we are very pragmatic. We want to find the most appropriate, sustainable and economic solution. If that means introducing some steel, then we will look into that,” he says.

Although a hybrid negatively impacts on some of the benefits of using CLT, in exchange you get more flexibility, variety, and the potential for timber buildings to go higher than ever before. “With the use of timber in hybrid form we could start to look at 20, 30 or even 40 storey structures,” he says (see below).

Whether they opt for hybrid or pure, Liddell is certain that we will find major housebuilders looking more seriously at CLT in the near future. “The height and scale of these two projects in Hackney will generate a new level of interest in CLT, and I expect that 2015 will be a record year for the amount of CLT used in the UK,” he says.

Outside its Hackney heartland, CLT is gaining ground in south London, with Lend Lease leading the way. The developer built the current world’s tallest CLT building in Melbourne, Australia, in 2012 and is now working on several CLT schemes in London. In Battersea, at Cobalt Place, it is delivering 104 homes designed by AHMM, while 55 homes at Victoria Drive, also in the London Borough of Wandsworth, are also in the pipeline.

CLT is a major part of the £1.5bn development at Elephant & Castle, with Lend Lease seeking to use the material wherever it is appropriate. “Going forward we want to look to build more blocks from CLT, as we recognise the material provides great benefits,” says Jon Kirkpatrick, head of sustainability at Lend Lease. “We consider CLT for all appropriate projects, as it is really important that we look at all types of technology, to get buildings up quicker and safer.”

As CLT is more widely adopted, it looks set to become part of the industry’s mainstream operations. And while a pure CLT building may be best suited to low to medium rise mass housing, we can look forward to hybrid structures pushing timber’s geometric and height boundaries ever further.

Murray Grove, Hackney Also known as the Stadthaus, this nine-storey tower in Hackney (right), designed by Waugh Thistleton Architects, was the tallest modern timber structure in the world when it was completed in 2008.

Bridport House, Hackney This 41-unit, eight-storey social housing block designed by Karakusevic Carson Architects was the largest solid timber building in the UK when it completed in 2011.

… and six more to come

Dalston Lane, Hackney This 121-unit residential block will be the largest CLT building in the world when it completes next year.

The Tree, Bergen A hybrid of glulam columns and CLT, this 14-storey apartment block is now on site in Bergen, Norway.

HoHo, Vienna Plans are mooted for a 25-storey wooden skyscraper in Vienna, Austria (right). Architect Rüdiger Lainer & Partner says the structure of the towers would be 70% timber.

Tall tower competition, US Last October the US Department of Agriculture launched an ideas competition to design a tall wooden building with a $2 million prize. The winner will be announced this year.