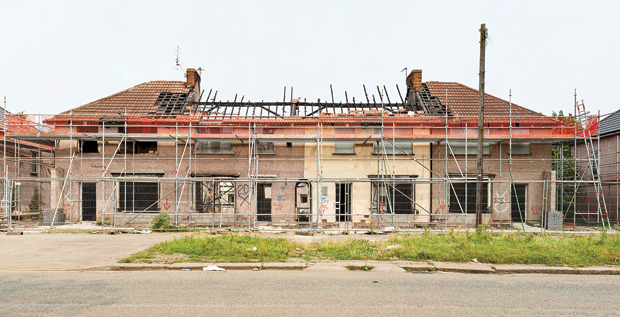 Three years ago, Broad Lane in Liverpool’s Norris Green was an eerie, almost-forgotten area of the city lined with rows of abandoned council homes with smashed windows, burnt-out rooms and walls scrawled with graffiti. The few remaining residents on the street were afraid to go to bed at night, not knowing whether arsonists would reduce their properties to ashes before the morning.

But today, thanks to an ambitious £4.2m government-funded refurbishment scheme, 74 of the most severely neglected properties on the street have been given a new lease of life as contemporary, three-bed family homes designed to make residents and the community feel proud once again.

"Part of our ethos was to create attractive properties that people don’t feel like they have been thoughtlessly shoved into. But it was also about creating very durable, low-maintenance properties that will minimise our long-term lifecycle costs."

Broad Lane now features the types of high-quality materials, fixtures and fittings usually associated with the hotel sector or high-end private housing. And contrary to expectations, LMH was able to source these Grand Designs components, including baths and basins from Kaldewei in Germany and durable kitchen tiles from Porcelanosa in Spain, without the associated high price tags, through its innovative approach to procurement (see below). Ultimately, it demonstrated how refurbished stock can provide better long-term value for housing associations.

“We are very proud of the specification we have been able to achieve,” says Maggi Howard, director of assets and enterprise at LMH. “Part of our ethos was to create attractive properties that people don’t feel like they have been thoughtlessly shoved into. But it was also about creating very durable, low-maintenance properties that will minimise our long-term lifecycle costs. It’s unfortunate that many councils and housing associations still take a lowest-cost approach to specification, which is a false economy,” she says.

The irony of Broad Lane is that it was originally intended to be a very desirable place to live, part of a post-First World War “Boot” estate of spacious, well-designed homes with gardens in crescents and culs-de-sac. The joke among locals in the 1920s was that you had to have a letter from God to get a house there.

However, unlike other brick-built houses in Norris Green, Boot houses were constructed using precast reinforced clinker-concrete columns, which eroded when the embedded non-stainless steel rebar came into contact with the concrete, causing structural defects.

In 2000, a plan was made to demolish the houses on the Boot estate and rebuild them, a move considered at the time to be cheaper than refurbishment. The residents were gradually decanted from their homes, but two years later budgetary pressures forced the council to pull the plug on the project and the estate fell into decline.

“Towards the end of the decade, the homes were considered a blight on the neighbourhood and were slowing down the pace of sales for nearby properties,” LMH’s Howard says. “It’s difficult to commit to buying a new property when just around the corner is a row of houses that has been arson attacked and is in a very poor state of repair.”

LMH was set up in April 2008 through a stock transfer of 15,000 social housing properties managed by LCC. Its role was to manage the properties until they were eventually demolished and new homes were built for sale on the open market.

But land values on the Boot estate had decreased so much that knocking down and rebuilding was no longer considered viable, so instead LMH proposed a plan to bring the existing properties back into use as social housing through an extensive refurbishment programme.

The Hanson Structherm system of lightweight panels with a render finish extends the life of defective buildings. 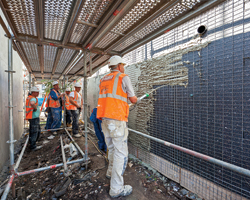 As Paul Moscardini, director at John McCall Architects, explains: “It’s great that these properties haven’t simply been knocked down, which has happened in many nearby estates. It has meant we’ve been able to retain the original streetscape and reuse what are essentially very nice houses with lots of internal space. It’s also a better use of resources than demolishing and rebuilding.”

Most of the Broad Lane properties were empty for more than eight years and had suffered major roof damage, damp problems, and ceilings had collapsed due to rainwater ingress. Some were vandalised or burned out by local vandals – a housing managers’ nightmare as a huge amount of damage is done in a very short space of time – or had infestations of pigeons or rats.

Main contractor Mitie Property Services was contracted to carry out a complete external overhaul of all 74 houses, which included three owner-occupied properties. This involved installation of new roofs, windows, doors, soffits and fascias, plus a structural external wall insulation system designed to increase the strength and thermal performance of the eroded concrete walls.

This lightweight panellised system, called Structherm, is designed as a cost-effective method of extending the life of a defective building and avoiding the need for demolition, by creating a rigid, structurally continuous and visually attractive envelope. The panels in the Hanson system are based around a core of rigid insulation set within a galvanised steel cage, covered by a render finish. With the structural envelope strengthened, the interiors could be rebuilt.

“The 71 voided properties in Broad Lane were given a complete internal remodelling,” says James Tattan, director of Mitie. “Damp issues meant plaster had to be stripped back to bare brickwork on all the internal walls, leaving us with an empty shell.”

A range of energy-efficient measures have been introduced to cut CO2 emissions and reduce fuel bills for the low-income residents, including solar photovoltaics, triple glazing, loft insulation and water-saving showers and toilets.

LMH worked hard to ensure that only the most durable high-quality products and materials were fitted in the homes in an effort to reduce future maintenance and replacement costs as well as create an attractive environment for residents.

Where most councils and housing associations specify components with an average seven-year warranty period, LMH was looking to add at least five years to that and in some cases much longer.

With a refurbishment programme covering 15,000 homes, most of them requiring some form of modification to kitchens and bathrooms, LMH was able to leverage economies of scale, plus the falling construction prices resulting from the credit crunch, to achieve some enviable deals on components.

“At the height of the programme we spent £1.5m a week, which enabled us to buy in the bulk we needed to keep the programme moving,” Howard says.

Takeparts can source quality, low-maintenance kit for broadly the same, or sometimes cheaper, capital cost as for components sold to the consumer DIY market. This has the added benefit of improving the sustainability of their estates, he says, as extended product lifespans and the fact that most products are sourced from European suppliers, not China, reduces embodied energy.

LMH was able to refurbish each property in Broad Lane for £57,000, about half the price of the average £100,000 Homes and Communities Agency standard new-build, and it is now monitoring the cost savings it has been able to achieve over the lifecycle of each property.

“This has proved a positive approach to breathing new life into old stock, which other councils and housing associations should consider, especially if there isn’t a market for new-build homes,” says LMH’s Howard. “Some critics have questioned whether such an unpopular area of the city can ever become popular again, but the road is transformed, homes now have juliet balconies, they have much larger rooms than those required under modern building standards, and a slick modern feel. They have brought a richness to the road, and the residents are truly excited to be living there again,” she concludes.

It sounds as if letters from God will soon be in demand again. 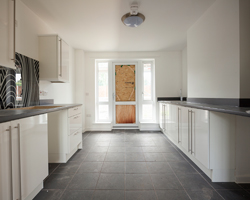 Most of the high-quality components fitted in the Broad Lane properties were sourced by materials procurement and supply company Takeparts. The firm was set up in 2009 with the specific aim of supplying councils and housing associations with the high-quality, durable products and materials needed to cut maintenance costs over long periods, thereby safeguarding their investment.

To achieve this goal, it teamed up with leading European manufacturers of high-spec products, leveraging the volume of large-scale social housing investment programmes and aggregated deliveries to reduce the cost of components.

Takeparts’ work with Liverpool Mutual Homes on the Norris Green estate, which includes Broad Lane, was its first major volume job, and since then it has worked with City West Housing Trust, First Choice Homes Oldham, Genesis Housing Group and some smaller housing associations in the north west.

With housing associations hard-pressed in the current climate, particularly after the government cut their funding by 60% in the 2010 Comprehensive Spending Review, the lowest-cost approach to component specification can seem attractive, but it is not practical, explains Peter Brown, managing director at Takeparts: “It’s surprising when you learn that many councils are still specifying the types of low-quality, cheap kit sold to the consumer DIY market, that is designed to be replaced on average every seven years when homeowners typically plan to move. But housing associations tend to have 30-year business plans, mostly financed by ongoing affordable rent, which requires a different business model and a different family of professional-grade components.”

If there is a weak link in supply, such as a bath panel that can’t be sourced or which has a short warranty (as was the case at Broad Lane), Takeparts can take on the role of supplier and commission a production run of a high-quality, similar alternative product from scratch.