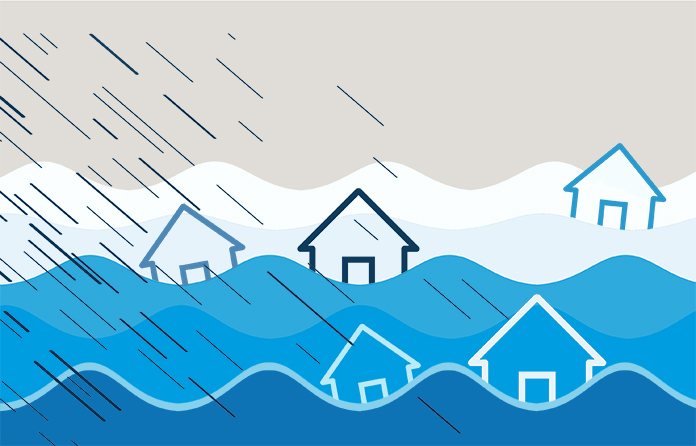 Flooding around East Lyng, on the Somerset Levels, in January 2014

A series of wet winters have changed attitudes to flood risk. This year, the first outputs from the Government-backed flood resilience action plan will include a new code of practice for construction projects, with changes to building regulations also in the pipeline. Jon Masters explains.

A new sub sector of construction has emerged in recent years. With substantial drive from insurers, this mini-industry concerns floods, or rather buildings’ resilience to flooding.

After major floods in Cumbria, Somerset, Yorkshire and elsewhere in recent years, proponents of making properties more resilient are calling for changes to building regulations. That is certainly on the cards. But the immediate aim is to get more properties at risk retrofitted with flood resilience measures.

The floods of 2015/16 caused about £1.3bn in property damages, according to the Association of British Insurers – and cost the wider economy a reported £5bn. Stories that emerged in the aftermath included tales of despairing businesses and homeowners flooded for the second or third time over the space of a decade.

The Department for Environment, Food and Rural Affairs (Defra) then convened a “round table of commercial interests” in flooding, headed by the former head of BRE, Dr Peter Bonfield, with the aim of finding ways to encourage more use of property flood resilience (PFR) measures.

Bonfield’s Flood Resilience Action Plan, published in September 2016, set out what five task groups would do, such as embedding more PFR in small businesses and launching an online source of public information on flood resilience. Two years on, Bonfield is no longer actively involved, but momentum has been maintained. The round table is now chaired by Aviva’s head of technical property claims, Graham Brogden. 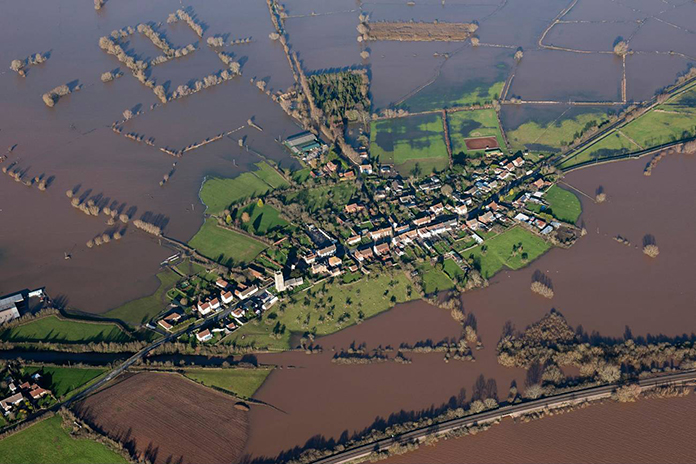 From the round table, a code of practice and guidance on PFR is being written for use by local authorities and all sectors of building and property industries. With input from CIRIA, BRE, CIWEM, the Environment Agency and others, the new code is expected around March this year. It will be pitched at designers, contractors and homeowners, on various methods and processes of PFR, including vital aspects of surveying to assess risk and appropriate measures.

“This will be the biggest and probably most important output so far from the first two years of the round table,” Brogden says.

CM spoke to a number of organisations involved in retrofitting PFR. All agree that a code of practice is needed, partly because it’s a relatively new area of industry – one which has grown as Defra and other government departments have made grant funding available for flood recovery.

“We found a lot of people selling their services after the grants were first announced, but they were often poorly fitted or ineffective measures. So the determination was that next time absolutely it [PFR] must be done properly,” says Brogden.

Maintenance is another important issue, likely to be covered in the new code, Brogden adds: “One of the main problems we found in Cumbria was that, while some properties were fitted with defences after the floods of 2005 and 2009, in the form of temporary door guards and barriers, when the 2015 flooding hit, they were ineffective because they hadn’t been maintained. The new code of practice will include a section on maintenance.”

The government’s response since the last big flooding events of 2015 included a £2.5bn grant fund for flood defences up to 2021. The Ministry of Housing, Communities & Local Government says £300m has been awarded to flooded businesses and communities. Further grants are available from the Environment Agency.

Meanwhile the Flood Re scheme offers insurance for buildings built before 2009. For newer properties, it’s assumed flood risk assessments, planning guidance and good design will ensure they are not at risk.

“There is a lot of focus on SUDS [sustainable urban drainage systems] and other ways of keeping water out when it comes to new-builds, but there’s still little certainty that properties are resilient, so we want to influence changes to building regulations in favour of PFR. Until that happens we will not have much traction on increasing the resilience of newer properties,” Brogden says.

The generally accepted approach to PFR (which will be reflected in the code of practice) adopts a stance of combining appropriate flood protection with measures designed to minimise damage and allow as quick a recovery as possible – installing concrete floors and lifting electrical sockets and white goods, for example.

There is an acknowledgement that some flooding is unavoidable when extreme weather hits and that water should be allowed to enter a property rather than build up against walls so high (to depths of 600mm or more) that it results in structural damage.

“It’s important to realise that the average flood is 0.3m high. Most can be kept out… but some are very big and will overtop the best defences.”

A major sticking point for PFR, acknowledged as a cause of a lot of difficulty for homeowners, is the number of organisations involved.

“Pulling all the different players and guidance together is a big challenge for PFR,” says senior architect for the Concrete Centre, and flood resilience task group member, Elaine Toogood. “It’s also a quite tricky and subtle area of specialism, because there are so many variables: different types of flood and risk; different ways of mitigating.”

As the head of water development for consultant WSP, Hamish Hall has substantial experience of recent flood resilience projects. He says: “The move to a policy of all-out prevention to one of protection and resilience is an important one. PFR is the right approach in many cases, but it’s still often difficult to get homeowners to accept that flooding will occur.”

WSP has submitted to the code of practice steering group a list of 20 learning points from a recent PFR project in the Midlands carried out with a local authority and the owners of 16 homes. The list reflects the complexities of dealing with multiple different people and circumstances and the potential opportunities for contractors.

“A specific scheme with a local authority may involve a portfolio of properties, but we’re treating each and their owners individually, with either a bronze, silver or gold level of PFR. The owners have some control over the level of funding and their independence is important, so they can make an informed decision on what level of protection and resilience to go for,” says Hall.

“Contractors in general are struggling with a plethora of products on the market, some of which require other things to have been done. But there is a lot of opportunity for contractors. Insurers are emerging as the drivers of PFR. They will eventually fund a lot of it instead of government, so there is a market for contractors to help insurers to take the lead, with advice on what works and how resilience can be improved.”

WSP’s submission to the steering group acknowledges the role that Mary Dhonau played in speaking to residents. After experiencing flooding herself on more than one occasion, Dhonau made her own home resilient and has since forged a career as a PFR consultant, as well as chief executive of the Know Your Flood Risk campaign and website.

“Contractors are on a learning curve when it comes to PFR; we all are. What’s strongly needed is more research to get a body of knowledge behind the advice, on what works and which materials work together, such as waterproof insulation and cement-type plaster for tanking rooms up to certain heights,” she says.

“It’s important to realise that the average flood is 0.3m high. Most can be kept out or recovered from easily, but some are very big and will overtop the best defences. People at risk need to acknowledge, adapt and be ready so that they can get back to normal quicker and reduce the trauma of being flooded.”

PFR measures are used in a case of repeated flooding 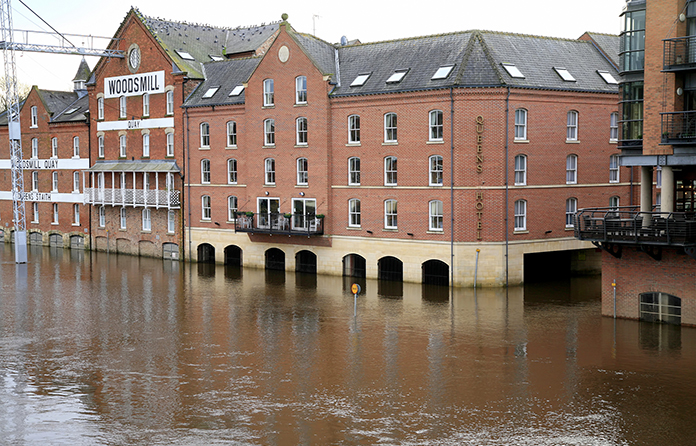 The River Ouse in York has flooded frequently in recent years

Mary Dhonau’s Know Your Flood Risk campaign has helped homes and businesses install property flood resilience (PFR) features, including one home in York which has been overwhelmed by flooding in the past decade.

The owners of the house on the River Ouse have had their property “tanked” up to dado rail height – with wall exteriors sealed and water resistant tiles and paint on interior surfaces.

The ground floor of the house now has heavy wood-effect ceramic tiles, doors have quick-release hinges and virtually all of the ground floor furniture including the kitchen units can be either raised or moved upstairs.

All of this was done after the Boxing Day flood of 2015, the 11th flood the owners had experienced since they bought the listed Georgian cottage in 2006. Some PFR had been fitted before then to cope with frequent shallow flooding, but the 2015 flood was far bigger, trapping its occupants on the upper floor for four days.

Since then the PFR measures have been beefed up, with sump pumps in the kitchen and living room.

The Georgian bow windows have been reinforced with concrete surrounds, with the approval of a local conservation officer and the owners now have bespoke steel barriers for fitting across the lower floor windows in readiness for extreme flooding.