UK construction can’t see the wood for the trees 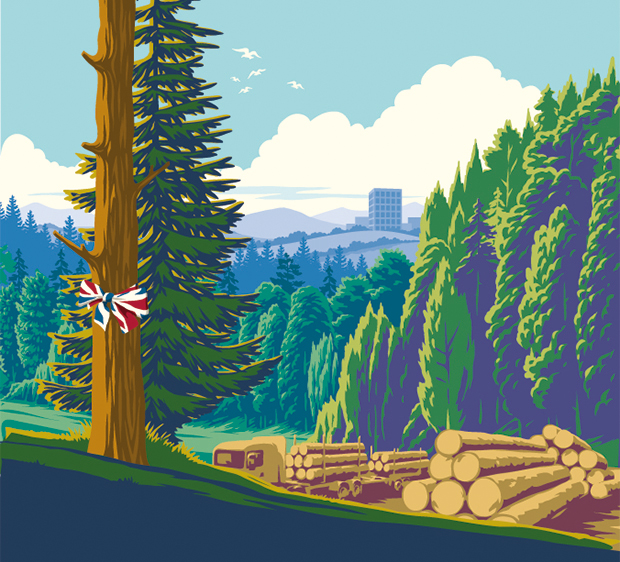 Our green and pleasant land is covered in trees, yet the UK construction industry imports 80% of its timber. Stephen Cousins looks at efforts to persuade the construction sector to look closer to home. Illustration by Gary Bullock.

The UK construction sector consumes roughly 5 million cubic metres of softwood each year. But despite an abundance of forests and woodland, a staggering 80% of it comes from abroad, and Britain remains the world’s third-largest net importer of forest products, after China and Japan.

That is not to say the industry has no desire to use more home grown material. Research published in October by the not-for-profit promotion organisation Grown in Britain found that 92% of large contractors would support an industry-wide commitment to use more home-grown timber, and more than 60% said they would add clauses into contracts to encourage its specification.

But, if there is so much latent support, why has specifying home-grown timber not been a priority for the sector?

There are several factors. The UK has a historic dependence on imported timber that dates back hundreds of years, and many manufacturing and craft skills are in short supply. In addition supply chains are often unaware of the provenance of the timber they use, or the suitability of locally grown timber for more demanding, high-value applications (case study, overleaf).

Charlie Law, managing director of environmental consultancy Sustainable Construction Solutions and co-chair of the construction sector task group at Grown in Britain tells Construction Manager: “Too many people are specifying C24-strength grade timber sourced from Europe, when C16 grade, most commonly found in the UK, would be sufficient (see panel).

“This is either because of over-specification by the architect or structural engineer, because they want to ‘play it safe’, or because builders revert to what they have done previously and use the higher grade because they haven’t looked into what they should be using.”

The Grown in Britain campaign is working alongside industry, research and academic organisations, such as the Forestry Commission, the Timber Research and Development Association (TRADA), and building research group BRE to spearhead efforts to increase the demand and supply of locally sourced timber, and create an economically, socially and environmentally viable future for the UK’s forests and woodlands. Grown in Britain also has a construction sector task group drawing in representatives from several UKCG members.

Construction’s interest in home-grown timber is intensifying, driven in part by the Social Value Act 2012, which has created a need to demonstrate support for local industry and jobs. Boosting Britain’s timber industry could also play an important role in achieving targets set in the government’s Industrial Strategy for Construction, which aims for a 50% reduction in the gap between exports and imports for construction products and materials by 2025.

A new focus on embodied carbon, rather than just operational carbon, has increased scrutiny of emissions created by the transport and manufacture of building materials. This trend is supported by the increasing take-up of European Union-driven environmental product declarations – product labels drawn up following a certified process that also quantify embodied carbon.

Interest is also being fuelled by the need to build housing faster and to higher standards of thermal efficiency and airtightness – a brief that can lend itself to timber-frame construction.

"We are producing more than 3.7 million cubic metres of C16 sawn wood suitable for high-value uses such as timber frame."

It all seems to be having some effect: the amount of UK softwood and hardwood, delivered to primary wood processors rose to 11 million green tonnes in 2013 – up 7% on the previous year – the most recent statistics from the Forestry Commission show.

However, more could be done to boost timber production. A 2012 report produced by the government’s Independent Panel on Forestry, set up following the public outcry at plans to sell off large areas of public forests and woodland, revealed a drastic economic underutilisation of Britain’s woodland resources. Everyone agrees that economic viability must underpin woodland’s environmental and social sustainability.

“Part of it means increasing the number of managed woodlands in the UK to create a renewable resource,” says Steve Cook, principal sustainable development manager at Willmott Dixon and co-chair of Grown in Britain’s construction task group.

“About half of woodlands in the UK are not managed. Trees self-plant, and grow bent and buckled to reach the light. This overgrowth reduces the amount of good-quality timber we can fell, it prevents public access to woodland, damages the health of trees, and brings greater risk of pests and diseases.”

Given that it typically takes 50 to 100 years to produce UK timber that can be used in construction, constant funding is needed to manage woodland, clear access and footpaths, and make it safe for the public. By insisting on home-grown timber, contractors and their supply chains provide the economic incentive to attract new producers to invest.

“The costs of existing forest certification schemes such as FSC [Forest Stewardship Council] and PEFC [Programme for the Endorsement of Forest Certification] can sometimes be out of reach for smallscale woodland owners. The Grown in Britain standard fully recognises FSC and PEFC and also accepts woodlands managed to the UKFS [UK Forests Standrd], but the fees are waived for woodlands under 20 hectares,” explains Cook.

One huge obstacle to boosting the UK timber market is the general perception of UK timber as a low-value product only suitable for applications such as falsework, palettes or fencing.

“We need to get rid of that misinformation,” says Andy Leitch, timber development policy adviser at Forestry Commission Scotland. “The fact is we are producing more than 3.7 million cubic metres of C16 sawn wood suitable for high-value uses such as timber frame.”

Over-specification can be avoided by using online tools such as Timbersizer and Connections, provided by TRADA, which enable users to calculate the types of UK timber suitable for different spans, all compliant with the Eurocode 5 design standard for timber structures.

Although the tools are currently only accessible for a fee, Grown in Britain and TRADA are looking at how to fund an alternative free or lower-cost version. TRADA has also produced an information pack, in collaboration with Grown in Britain, that lists all UK-manufactured timber and its relative availability.

“A lot of imported timber is American white oak, but we should be specifying European or English oak,” says Grown in Britain’s Law. “However, it depends on the product. If you’re looking for the immediate supply of 1,000 oak-veneered doors, the capacity just isn’t there and UK veneer trades are severely depleted.”

Designed and tested in collaboration with timber companies Binderholz, from Austria, and B&K Structures in the UK, the product comprises glued-together layers of Scottish Sitka spruce to create Eurocode 5-compliant panels of comparable strength to those produced in Europe. Having completed fire testing, market research and work to identify the timber resource for the next 25 to 30 years, Napier is now close to setting up a large-scale industrial plant in central Scotland.

“Two investors have been selected to joint fund the project, with confirmation expected before Easter,” says Peter Wilson, who heads the Wood Studio at Napier’s Institute for Sustainable Construction. “It might take another 18 months to two years to get the factory built and the CLT machines made, all of which are bespoke designed.

“A lot of CLT currently use in the UK is hugely over-engineered for the types of uses it is put to. We don’t expect to displace the large European manufacturers, as their output is phenomenal, but there are lot of things we can do to complement the imported material, using it for internal walls, for example.”

British hardwood production – such as ash and sycamore – might account for just 5% of British timber products, but were researchers are also developing new products to increase capacity. BRE is currently leading research investigating the thermal modification of British hardwoods, such as ash and sycamore, to improve their durability and resistance to poisonous fungi and insect attack, which are typical causes of rot and damage to hardwoods across Europe.

Trials of the technology, carried out in collaboration with Wiltshire-based hardwood processors Vastern Timber and Tyler Hardwoods, have involved heating lumber to high temperatures in controlled conditions to reduce moisture content and alter the materials’ properties. Apart from improving durability, the thermal modified timber (TMT) process enhances dimensional stability, and helps make the wood suitable for exterior products, such as cladding, window joinery or decking.

"It means increasing the number of managed woodlands in the UK to create a renewable resource."

“Our primary drive was to get higher-value British wood products into construction, but there is also potential to make better use of the large volumes of trees being felled as a result of diseases such as ash dieback, rather than see them go up in smoke in biomass energy units,” says Ed Suttie, director for timber at BRE.

“Thermally modified timber could provide an alternative to expensive tropical hardwood materials that have become less popular because of concerns about the sustainability of resources, or preservative-treated timber involving the use of unenvironmental chemicals.”

The team is currently looking at setting up a TMT plant in the UK, probably in Wiltshire, Suttie adds: “We have assessed the availability of ash, sycamore and other hardwood species within a 20-, 50- and 70-mile radius of where we think the plant should be, and there was more than we could have ever hoped for. By April we should have enough data to start building a full business case for a plant, ready to target investment.”

It is a bold vision that could significantly boost hardwood supply. But, like so many of the initiatives mentioned here, a thriving British timber industry requires proactive contractors, and supply chains willing to seek out home-grown alternatives to the over-engineered and less sustainable imported products that have often become the default setting. 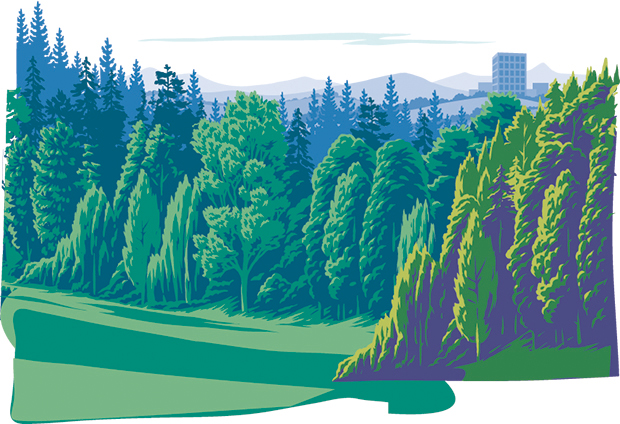