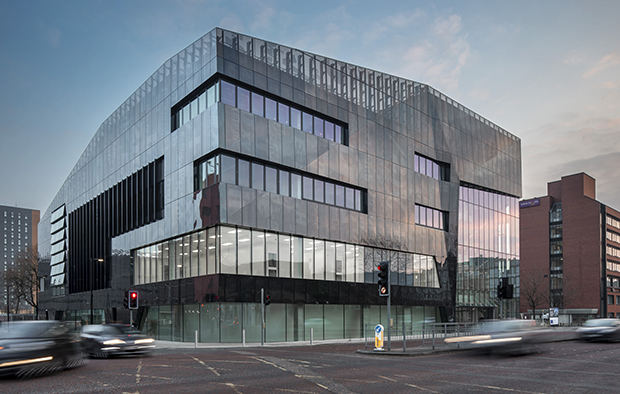 Building for research at atomic level presents particular challenges, as Tom Ravenscroft discovered at the National Graphene Institute. The result is a facility that will itself impact on the future of construction materials.

Graphene, the world’s first 2D material, boasts an impressive list of superlatives: 200 times stronger than steel, the thinnest material on earth, the world’s most conductive material, as well as being transparent, impermeable and flexible. It is no exaggeration to call graphene a super-material, which is why £61m, including £38m directly from government, has been spent on creating a dedicated research facility at the University of Manchester to investigate its potential.

Officially opened in March, the National Graphene Institute is a state-of-the-art research facility where graphene will be studied, and practical, patentable applications can be developed.

Designed by architect Jestico + Whiles, and built by BAM Construct, the intensively serviced 7,600 sq m building contains laboratories, offices and seminar rooms for 200 researchers, and two highly controlled clean rooms, where the most sensitive research will happen, and which defined the layout and specification of the entire project.

Graphene: six applications for the industry

The new material has scientists, governments and private companies clamouring to take advantage of its revolutionary characteristics, which will soon be making their way into construction products. Formed from graphite, graphene, a one-atom thick sheet of carbon arranged in a honeycomb lattice, is technically produced every time a pencil is used to write with.

However, it was not until 2004 that two researchers at the University of Manchester isolated the material by using Sellotape to painstakingly peel individual layers of carbon from a stick of graphite. The two professors – Andre Geim and Konstantin Novoselov – have subsequently been knighted and awarded the Nobel Prize in Physics, while Manchester has become the UK’s home of graphene.

Although graphene was isolated in Manchester, other countries and technology companies have taken the lead in researching it. This facility will allow the university to reassert its position leading the race to develop practical applications for the material.

“Commercialisation of graphene was the key driver for the building,” says Julian Dickens, associate director at Jestico + Whiles. “Some companies have taken a jump ahead in the application of graphene, so the primary purpose of the institute is to remedy this and create a bridge between the university and industry.”

The building is as high-tech as the research taking place inside it. Black steel cladding gives an overtly 21st century impression – a sleek stealth bomber set in the jumble of academic buildings that make up Manchester’s university district. Up close, hexagonal – or graphene-shaped – perforations in the steel cladding that delineate Novoselov’s breakthrough formula hint at the facility’s purpose.

The scientific work taking place inside is on public display through a street-facing window that runs along the entire eastern wall, and gives views into the basement of the four-storey building, where the most critical research will take place. Above this clean room, a plenum level for services and access occupies most of the ground floor. A smaller clean room, laboratories and a huge amount of plant fill the three floors above. A seminar space that opens onto a roof garden tops the building.

Jestico + Whiles became aware of the project in 2012, shortly after completing the Mountbatten Building for the University of Southampton’s School of Electronics and Computer Science – a facility dedicated to the research of nanotechnology and photonics.

“We won [the bid] based on the relevant experience we had designing clean rooms at Southampton,” explains Dickens.

One of only a few architects that has experience of producing high-tech research centres in the UK, Jestico & Whiles partnered with EC Harris to meet the requirements of the pre-qualification questionnaire, which demanded a project manager lead construction. 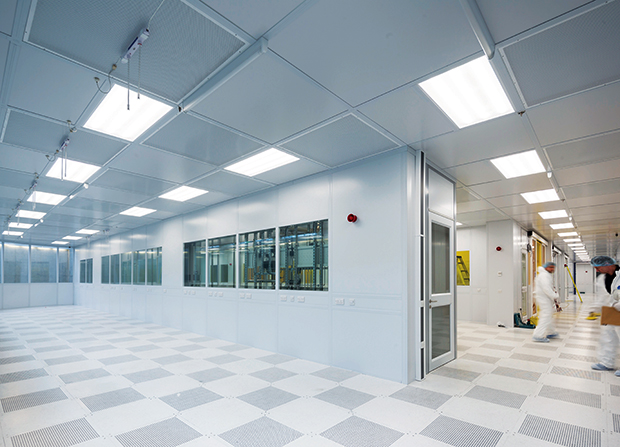 The highly specified cleanrooms, where the research takes place, have defined the layout and construction of the entire building

At Manchester the clean rooms are critical and the arrangement of the entire building follows from the need to meet the exacting specifications of these spaces. For its nanotechnology research the university required two clean rooms, one specified to ISO 6 (Class 1000) and a second, larger room to the higher ISO 5 (Class 100), where air is 10,000 times cleaner than that of the average office.

The clean rooms also had to meet stringent vibration standards: even the tiniest amount of movement can disrupt experiments that are being carried out at an atomic level. The university required the larger clean room to achieve a vibration criterion (VC) of D – the second-most stringent on the scale of A to E and 16 times more sensitive than the level of human perception. The smaller clean room had to achieve the lower rating of VC-B. The vibration specifications are the key determinant in both the organisation and construction of the entire institute.

“There is no point in building a beautiful car that doesn’t work,” says Dickens. “The primary design requirement was that the clean rooms meet the technical specifications set out by the client.”

To meet the vibration criteria the primary clean room was located in the basement. Ramboll, the acoustic, fire, environmental, civil and structural engineer on the project, found bedrock 4 metres below ground, without which the site may not have even been feasible.

How the National Graphene Institute fits together

There were then both external and internal sources of vibration to contend with. Externally the main concern was the traffic to the north of the building on Booth Street. This was solved by fixing pot holes and locating the most sensitive equipment away from the road.

The far bigger challenge was internal sources of vibration, particularly the extensive plant needed to service the clean rooms and other laboratories. To isolate the main sources of vibration from the sensitive laboratory spaces, a logical but radical solution was found. The main plant is housed over four floors in a central utility block (CUB), which has a structurally independent frame from the main building.

“It appears and acts as one building, but there are two entirely separate structures separated by a 50mm isolation joint,” explains Philip London, project manager at BAM Construct. The main building forms a “C” shape wrapped around the CUB, with access to the plant on all floors.

Achieving the vibration rating of VC-B for the second clean room was just as challenging. The smaller clean room was located on the first floor, where a building experiences substantially more lateral movement. To reduce movement to within the acceptable range an extremely stiff in situ concrete frame was designed.

“We used larger column sections and deeper floor slabs both with a higher percentage of reinforcement to create a rigid structure to ensure the clean rooms met the vibration standards,” says London.

Between the two clean room spaces is a plenum space, which occupies the bulk of the ground floor, traditionally a building’s most valuable space. The plenum space is occupied by ventilation and numerous filter units, allowing maintenance to take place without entering the clean spaces. It is one of many areas dedicated to servicing the building’s specialist laboratories and clean rooms.

“It’s not a large building but it is very heavily serviced,” says London, who estimates that 40% of the construction budget was spent on services. In addition to standard water, electric and ventilation facilities, the building has three extraction systems to remove solvents, gases and general fumes, as well as piping for more than 10 types of gases supplied to the laboratory spaces.

Such complex building design was made easier through the use of BIM, which saved time and money on clash detection. “Because of the intensity of the services, BIM was extremely beneficial to the project,” says London.

Although the design was driven by the extremely technical requirements of the laboratories, the architect has managed to introduce flourishes of interest. The main workspaces are broken up by an atrium, a roof garden accessible from the fourth floor and a 2001: A Space Odyssey-inspired black wall for scientists to write on.

The National Graphene Institute side section 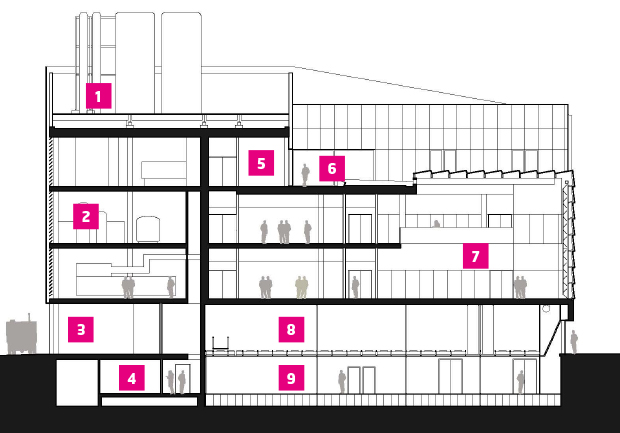 A top-lit corridor in the basement provides light into the clean room and a window for the public to view research taking place. This “dirty” corridor runs alongside the clean room to allow visitors to observe research in action without having to “gown up”.

“It puts the science on show, which was a key driver for this building, as research needs to be funded,” Dickens says.

If it had been built five years into the future, this window could have been used to demonstrate the potential of graphene. The architect and Novoselov investigated covering it with a film that would transform it into an interactive screen for the public to learn about the material and the research. The facility came too soon for this innovation, but it could be a reality on buildings and sites in the future.

However, the most obvious architectural flourish is the one that gives the building its black stealth bomber aesthetic. A skin wraps around the building, which Dickens describes as “quite lumpy”, to create a unified appearance. This veil is detached from the building, over an inner Eurobond cladding system – this is relatively cheap and often used on industrial sheds – which hangs from the concrete frame and provides screening from the rain.

The cladding was chosen after the architect and representatives from the university visited several buildings in London. They considering a screen-printed glass box or a steel mesh cladding, but settled on using perforated black Rimex stainless steel. The hexagonal perforations match the form of graphene. A pixelated image of Geim and Novoselov’s formula was by created by enlarging particular hexagons in the veil.

As Dickens says: “Often buildings are described as state of the art, but in this case it is true – they really are using the latest technology and the building really is cutting edge.”

This facility has been built to meet exacting specifications and is where research into the future of construction materials may be born. The university has now turned its sights on a second building on the campus dedicated to graphene: the £60m Graphene Engineering Innovation Centre designed by 20 Fenchurch Street architect Rafael Vinoly. Due open in 2017, this facility will be dedicated to taking innovations from the institute into production. It should not be long before graphene products, and the material itself, is in use in construction.