The rise of construction robotics 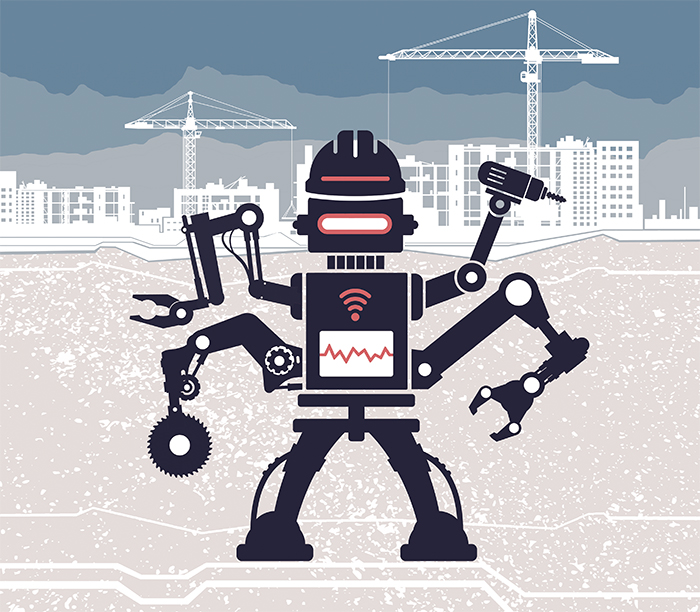 How quickly – and widely – will robotics and automation become part of construction processes? Stephen Cousins looks at the robots already in use in the industry – and the R&D projects that could soon bring new autonomous technology to a site near you.

Robotics and machine-based automation align closely with the drive to digitise the industry – and deliver projects faster and more cheaply.

“Manufacturers are focused on creating easy-to-use interfaces so that robots are easy to program, which makes it easy for innovators to build a credible business case to implement robotics in our sector.”

There is also the potential to link robots with digital models, so they do not need pre-programming by humans.

“Our current focus is connecting our CAD systems to robotics, so the robot can understand and have the autonomy to execute tasks itself,” explains Felipe Manzatucci, innovation director at Skanska (see box, p28). “The right data capture from the CAD systems will be an enabler of AI. That link is an important step in making digitalisation an enabler of industrialisation.” 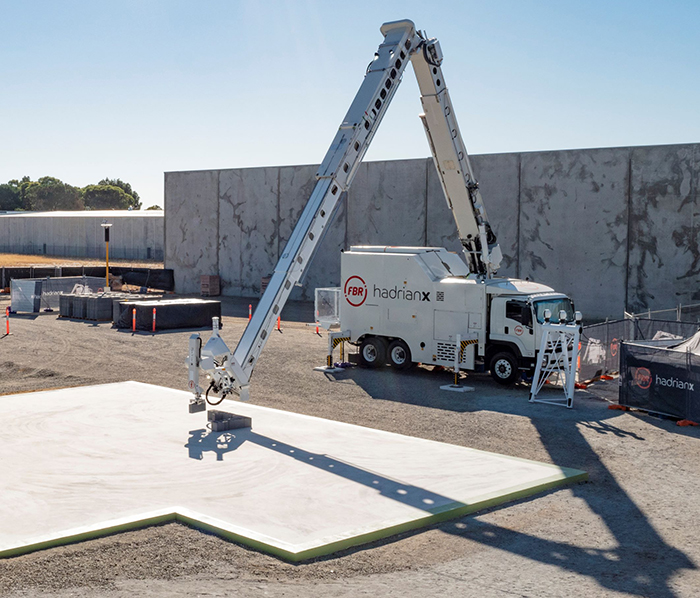 But this emerging field also raises challenges. Most robots are prototypes with technological shortcomings and do not comply with current Building Regulations or health and safety requirements. Use of robots on sites has serious implications for employment – the World Economic Forum predicts that automated machines will handle half of all workplace tasks by 2025.

Meanwhile, converting the industry to a mindset that embraces digital design, manufacture and assembly will be tricky, given procurement practices and a historic resistance to innovation.

“Robo-tech” has hit the headlines over the past few years. The bricklaying robot Hadrian X showed last November that it could build the shell of a house in just three days. Its creator, Australian firm Fastbrick Robotics (FBR) recently formed a 50/50 joint venture with building materials supplier Brickworks to start building homes down under.

TyBot is the creation of US-based Advanced Construction Robotics, which automates tying of steel reinforcement bars. The system uses a robotic arm rigged to a gantry crane to locate rebar junctions then tie them together before a concrete pour. Its inventor says TyBot can match the speed of a team of about six to eight site workers with only one worker required to supervise.

Kier is one of three international contractors that have trialled a robot designed to trundle around sites at night to automatically capture daily progress. The four-wheeled machine, developed by Scaled Robotics, manoeuvres around obstacles and records detailed 3D survey scans and panoramic photos. Online software compares the as-built information against BIM to identify any discrepancies, helping contractors keep tabs on quality and progress. 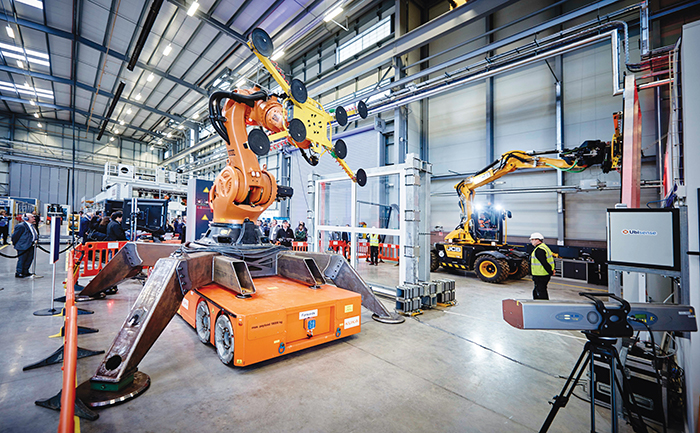 A Kuka Titan robot, at the Manufacturing Technology Centre, can work with a metrology scanning system to accurately position facade panels

Significant hype around 3D printing is starting to transition into live examples. The first 3D-printed house in the EU was fabricated by a modified manufacturing robot in Milan’s central square as part of the city’s design festival last year. The one-storey prototype home, developed by CLS Architects, engineering consultancy Arup and printing specialist CyBe Construction, is designed to be dismantled and reused. The walls were printed directly onto the pavement in 33 separate modules by a 5-axis robot fitted with a custom extruder.

Giving robots the ability to move around to print structures opens up the potential to build at virtually any scale. Researchers from Nanyang Technological University in Singapore recently demonstrated two arm-type robots on wheels that printed a concrete structure in tandem. The entire sequence was automated and controlled using bespoke software.

In Spain, a massive new hybrid machine has been developed to produce complex metal parts and structures for construction projects. The Large Additive Subtractive Integrated Modular Machine (LASIMM) was funded under the EU’s Horizon 2020 research programme and features metal additive and subtractive capabilities.

The unit combines a modular configuration of industrial robot arms, used for the additive manufacturing of aluminium and steel, with a specialised milling robot, that machines away surplus material to provide the final finish. The machine’s developers claim it will reduce time and cost expenditure by 20% compared to the traditional hybrid manufacturing of large engineering parts. Prefabrication and offsite manufacturing also offers potential for automation.

“Skilled trades will not be lost, they will instead gain the skill of the programming cobots to help them with the bulk of their tasks.”

The “flying factories” concept was pioneered by Skanska, where robots assemble components in temporary, mobile assembly plants. Now, Danish tech firm Odico has created its own Factory on the Fly, a mini-manufacturing unit shipped to projects inside a standard shipping container. The system is able to custom-fabricate products, including formwork, insulation, reinforcement or tiles.

The product is based around Odico’s signature robotic manufacturing system designed to produce complex double-curved formwork moulds for concrete, recently used on a Zaha Hadid project, the Opus Tower in Dubai.

The Manufacturing Technology Centre (MTC), whose construction partners include Skanska, Kier and Willmott Dixon, is a research facility in Coventry focused on bringing manufacturing system solutions to construction. It received a share of £72m in government funding at the end of last year.

Neil Rawlinson, strategic development director at MTC, says: “A lot of companies come to us because they want to be the next big thing in additive manufacturing, or the next big thing in robotics, but what they mostly need is to look at their whole production system, including the design system that leads to production and the way they manage their data to use it more efficiently. They get the biggest benefit from this whole system level perspective.”

An early example of this approach is the Seismic Consortium, set up by MTC, consultant Blacc, design practice Bryden Wood and offsite specialists Elliott and McAvoy Group, to transform the design and delivery of primary schools. The project will develop a standardised set of components and assemblies that can be produced by multiple offsite specialists to achieve unprecedented economies of scale.

This “structured product family architecture” supports the development of a web-based app to allow teachers to configure new primary school buildings in line with government requirements.

Seismic is focused primarily on designing buildings for a manufacturing system, says Rawlinson: “The ideal way to get a ‘product’ to market at volume is to understand the manufacturing process, then design components to fit your production facilities and production supply chains. Designers can then design within that framework.” 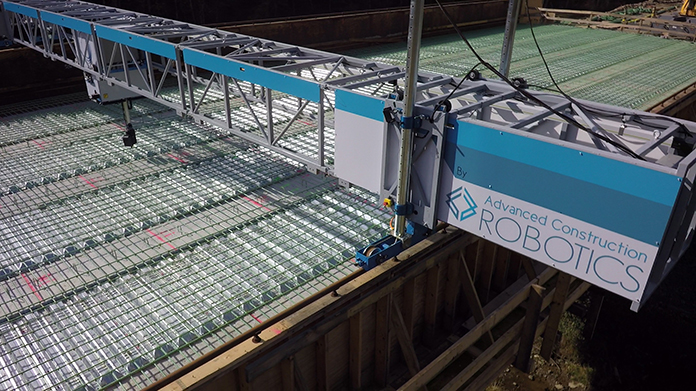 Several researchers are using robots from Chinese firm Kuka to introduce high-accuracy manufacturing processes into construction. One PhD researcher has fitted a robot with a custom effector to automatically imprint steel plates with 3D geometry to boost strength and rigidity. This could inform the development of a new facade panel that requires less strengthening, or a self-supporting facade based on a “ribbed” design across multiple connected panels.

At a strategic level, manufacturing-based thinking will need to be embedded into an industry that is used to procuring projects as one-offs with a high level of bespoke design.

Rawlinson comments: “A building would be considered a prototype in the manufacturing sector, but in construction it is the finished product. The way projects are currently procured doesn’t drive the manufacturing mindset, which is why we are working with various government departments that have committed to offsite to educate them on how to be better buyers of manufactured systems.

“That change in motivation should help drive different commercial behaviours down throughout the supply chain.”

“Our current focus is connecting our CAD systems to robotics, so the robot can understand and have the autonomy to execute tasks itself.”

Robotics and advanced automation remain nascent technologies that face technical challenges and barriers to market. For example, large-scale 3D printers remain far from compliant with EU building codes and are prohibitively expensive. Sites are also unpredictable environments and robots are not yet intelligent enough to work seamlessly alongside human counterparts.

The use of cobots – machines that work alongside humans – could become the most likely scenario, says Thompson: “Just as the industry progressed from using screwdrivers to power drills, in the future it will progress from power drills to the use of cobots. Skilled trades will not be lost, they will instead gain the skill of programming cobots to help them with the bulk of their tasks.”

Understanding how robotics will affect site processes is one aim of a partnership between Balfour Beatty and Kelvinside Academy in Glasgow, where it is building a campus. It will provide space for students to work with academics and experts on a range of robotics projects, and is part of Balfour’s vision of reducing onsite activity by 25% by 2025. 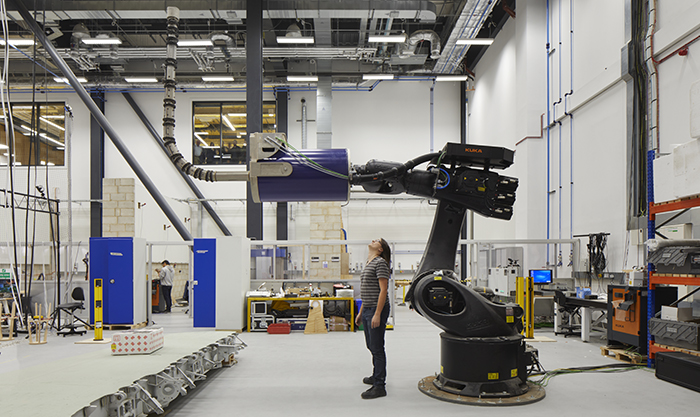 Construction is only at the beginning of its robotics journey and many disruptive ideas and processes will emerge from ongoing research and experimentation.

A major proving ground is University College London’s (UCL) new high-tech research, robotics and testing centre at Here East in Stratford (pictured), developed by the Bartlett Faculty of the Built Environment, the School of Architecture and the Faculty of Engineering Sciences.

In a sectioned-off zone, researchers from the Autonomous Manufacturing Lab, part of the UCL Robotics Institute are developing autonomous drones that work together to 3D print concrete structures.

A key focus is the sophisticated control and machine learning techniques required to enable the quadcopters to collectively “work out” how to perform tasks, rather than simply respond to instructions.

Peter Scully, technical director of B-Made, the acronym for The Bartlett Manufacturing + Design Exchange, comments: “The goal is not to tell the drones what you want them to do, but what you want them to achieve; then they ‘discuss’ how to sequence the work. For example, one UAV might have a low battery; when it returns to the charging station another unit could make the decision to take on its workload.”