How construction margins fail to make up for the risks 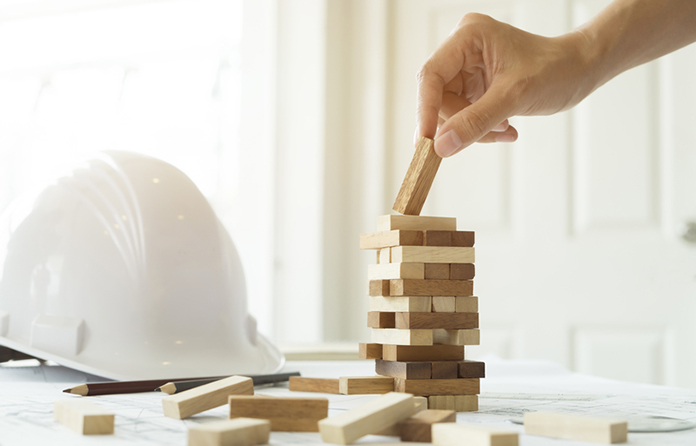 There’s a worrying gap between the margins construction professionals think companies should be earning and what they actually earn, a survey by CM and Commercial Risk Management discovers.

The margin that the majority of construction firms expect to make from projects and what they actually earn is “seriously imbalanced”, meaning the compensation they receive is often insufficient for the risks they undertake.

That’s one of the worrying findings from a survey of over 300 construction professionals by CM in partnership with Commercial Risk Management, which set out to examine where risk should sit on construction projects.

Nearly two-thirds (63.6%) of respondents say they would expect the appropriate level of margin for a main contractor under a design-and-build contract to be above 5% – well above the average achieved in the industry. 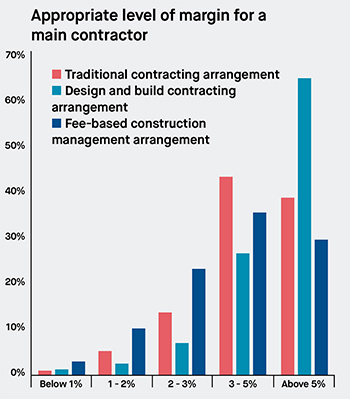 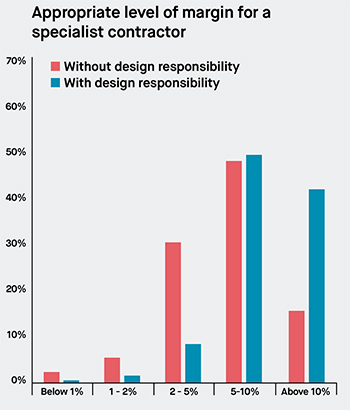 “The survey responses are communicating clearly that the ratio of risk to reward in contracting is seriously imbalanced – put simply, the margins that contractors may expect to earn from projects is insufficient compensation for the uncertainty and risk exposure they face in delivering them,” Jason Farnell, managing director of Commercial Risk Management, says.

“Contracting procurement routes have changed over time and a significant contributory factor to the erosion in margins, in terms of both aspiration and actual achievements, is the blurring of the difference between what would once have been termed ‘hard money’ – traditional or design-and-build lump sum contracting – and fee-based arrangements – construction management and management contracting,” he adds.

The effect of this blurring of the boundaries between design-and-build contracts and fee-based arrangements means clients and contractors see both options as interchangeable, resulting in the suppression of margins in both forms of procurement, Farnell contends.

When it comes to the specialist contractor markets, almost half of respondents believe that the margin for a specialist firm without design responsibility should be 5-10%. Another third (29.4%) think it should be 2-5%.

That compares with specialist contractors with design responsibility, for whom 41.3% of respondents think the appropriate margin is above 10%, while 48.6% consider 5-10% suitable.

“There is a greater level of consistency in the responses about the levels of margin that are appropriate in the specialist contractor markets, with a significant proportion of respondents recognising the risk inherent in design contracts and that this should be rewarded accordingly,” Farnell remarks.

Meanwhile, the scale of risk required means that only large contractors can compete for most design-and-build contracts, with more than 60% either agreeing or strongly agreeing.

On traditional or lump sum contracts on the other hand, there is a clear choice in favour of architects (46.7%), followed by the main contractor with 27%.

“The survey results indicate that the feeling in the industry is that only major contractors have the infrastructure and skills to deal with design and build contracts properly and that there should be more responsibility allocated to the architect, particularly in traditional contracts.”

In what Farnell calls a “particularly disturbing” development, only 42% of respondents either agreed or strongly agreed that they were comfortable with their risk management approach, while 27.5% were neutral and 30.5% either disagreed or strongly disagreed.

“This is certainly an area where contractors and specialists can help themselves, which will inevitably lead to margin improvements,” he says.

When it comes to defects on projects, 66% said they dealt with them as and when they found them, 14.3% managed them at the end and 8.7% used an independent assessor or certifier, while 3% claimed not to have any defects.

Most respondents expect insurance premiums to increase. “The insurance responses were consistent between design and build and traditional procurement routes, indicating that premium increases do not seem to be determining the market for design and build rather that bespoke policies, exclusions and liability caps will be the way in which the appetite for risk will be controlled,” says Farnell.

Summing up the findings, he adds: “The survey strongly supports a return to the allocation of design responsibility where it can be best managed and an indication that unsustainably low margins will not be tolerated.”

This survey was carried out in association with Commercial Risk Management