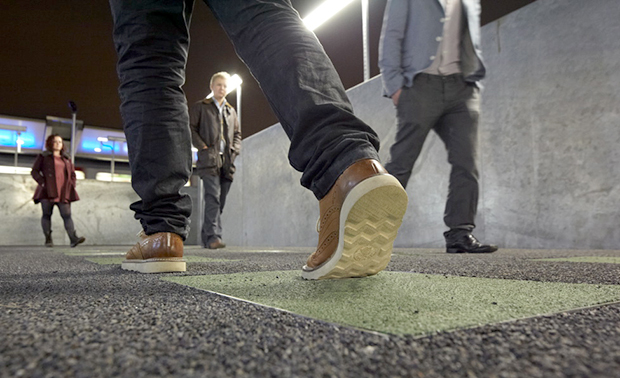 The cost of “smart” paving tiles that generate electrical power from human footfall will drop below £600/sq m this year, bringing them closer in line with high-end landscaping options for the first time, their inventor has claimed.

Pavegen tiles generate about 7W of power from every footstep and store it in a battery to power street lighting or other streetside uses.

The tech start-up became a crowdfunding success story last year when it won more than £750,000 of investment in just two days, through the website Crowdcube, then went on to attract more than £2m.

That money has been channeled into R&D to develop a more efficient tile, due for launch in June, that will also be cheaper due to the economies of large-scale manufacture. Last year, the company costed its product at £1,250/sq m.

Laurence Kemball-Cook, entrepreneur and founder of Pavegen, told CM: “The aim of the capital was to upscale and bring onboard leaders in technology, science and the energy sector to take the product forward.

“We now have clout with some of the biggest manufacturers in the world, making it possible to deliver volumes not possible two years ago. We aim to have our product retailing for sub-£600/sq m this year, where currently one square metre of granite floor at King’s Cross station costs around £1,000.”

The new product will be launched on a live project at a London retail site, followed by a series of international launch installations in Washington DC, Singapore, South Korea and Australia.

It will be more energy efficient than the previous version, says Kemball-Cook, and offer increased data functionality for smart city applications, such as monitoring levels of foot traffic in specific locations to help facilities managers better manage properties, or allow property owners to raise advertising revenue based on footfall. 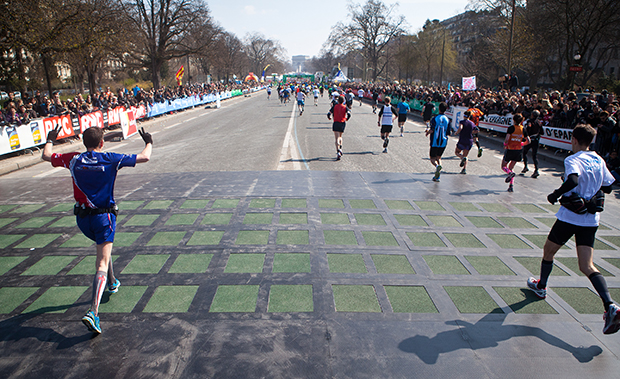 Pavegen installed at the finishing line of the 2013 Paris marathon

Kemball-Cook added: “The new product will really change the way we have even looked at the issue of energy, completely flipping it on its head. We have a data and energy proposition we are really excited about. We can provide a granular look at how people move, which is really important for the smart city of the future, as every footstep has a unique ID.

“Link it to peoples’ smartphones (with their permission) and it gets really exciting because you can know who a person is and where and when they are going somewhere.”

Pavegen has already completed 100 projects in 30 countries and plans to have millions of tiles installed in every major city in the world within the next five years. The largest UK installation, at Heathrow, features 65 tiles across a corridor, used to power LED lights.

The firm recently worked with Shell, in Lagos, Nigeria, to install tiles under a football pitch where the movement of players is harnessed to power floodlights at night.

“In Nigeria there is a big issue around access to energy, with no real power grid that often means using noisy and pollutive generators for power,” says Kemball-Cook. “We partnered with Shell, on the Make the Future campaign, to improve access to energy in environments that really need it.

“It is about disrupting change in the way people see energy, improving communities, and showing that kinetic energy can really improve economies that require a huge amount of development.”

An industrial design engineer by training, Kemball-Cook started out working in a PFI team at E.ON to develop a new form of sustainable off-grid street lighting. Although the team failed to find a viable solution, the issue of how to produce renewable energy in busy urban areas stayed with him. He started the company in 2009 with an initial £150,000 seed funding.

The company’s goal is to bring the costs down to a level that make it a viable option to deploy in many developing countries.