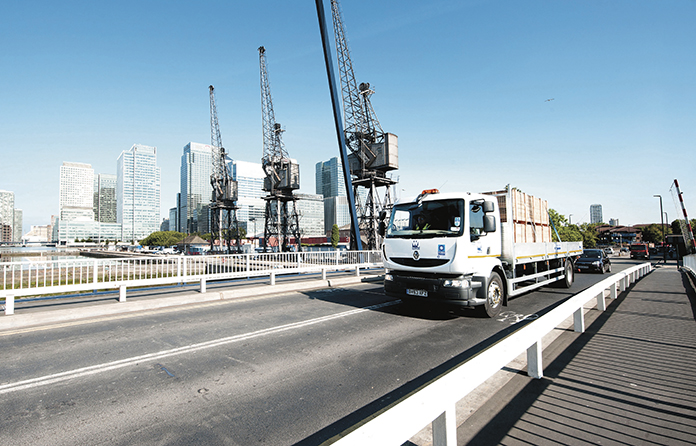 A Wilson James construction lorry in east London. All its vehicles are Euro VI compliant

New Ultra Low Emission Zone for central London comes into force next month (April) and many construction vehicles will have to pay a charge. By Will Mann.

A third of construction vehicles delivering to sites in central London’s new Ultra Low Emission Zone are not compliant with the tighter exhaust requirements, according to research by industry logistics specialist Wilson James.

From 8 April, Transport for London (TfL) rules mean lorries and heavier vans entering the centre of the capital must meet Euro VI standards – or pay a daily charge of £100.

Wilson James, which works with many major London construction projects, said it monitored delivery vehicles on its sites throughout 2018 and found that roughly one in three did not comply.

The ULEZ will be in place in central London from 8 April 2019.

Director of logistics Keith Winterflood said the cost of fleet upgrades would likely be borne by the supply chain.

“Main contractors will support TfL’s environmental initiative and will expect their suppliers to pick up the tab for upgrading their fleets, but that may mean a rise in supply chain tender prices,” he explained.

“On a typical large central London project, there are about 300 deliveries daily, so if
there are 100 non-compliant vehicles, they will be paying a total of £10,000 in charges per day,” he added.

“Charges will rise next year and the zone is being extended.”

The ULEZ will expand to include the whole of Greater London for HGVs from October 2020, and any that are Euro III or older will pay a £300 charge.

Winterflood estimates that the typical cost for a construction firm to upgrade to an 18-tonne curtain-sided Euro VI compliant vehicle is £75,000.

“There will be a natural improvement in compliance with the ULEZ as these companies replace their fleets, and there has been another 6% to 7% improvement so far in 2019,” he said.

“We provide a two-fold saving on emissions; our vehicles are cleaner and they are fully laden when they go into London whereas suppliers’ might only be partially laden,” explained Winterflood.