The NASC 2016 Yearbook has been published by the National Access and Scaffolding Confederation, containing guides to latest best practice in scaffolding and case studies of the most interesting challenges in the sector. 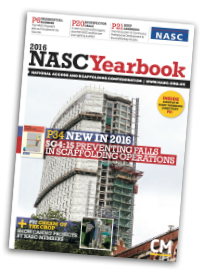 Distributed alongside the November issue of Construction Manager and published by Atom Publishing, the yearbook features project reports from NASC member companies including Trad Scaffolding at Centre Point, Tamworth Scaffolding at the refurbishment of the Royal Shakespeare Company in Stratford, and Brogan Group at London’s Archway Tower.

The yearbook also includes details of the impending launch of the NASC’s core scaffolding fall prevention guidance, SG4:15, which has been retitled “Preventing Falls in Scaffolding Operations”.

The update to flagship safety guidance is described as “evolution not revolution” but it has a broader scope to reflect a significant increase in the number of TG20 compliant scaffolds, changes to scaffolding good practice and innovation in the industry.

The publication also includes a report from NASC managing director Robin James on developments in the sector, including the impact of NASC’s TG20:13 good practice guide for tube and fitting scaffolding and innovative eGuide, and the revised SG4:15 Safety Guidance.

James said: “With the 70th anniversary, the launch of SG4:15, a new president in Alan Lilley and continued growth and innovation within the scaffolding sector, it’s very promising stuff for the confederation and its members in 2016 – as reflected in the contents of the 2016 Yearbook; surely a ‘must-read’ publication for anyone in the scaffolding and construction industries. 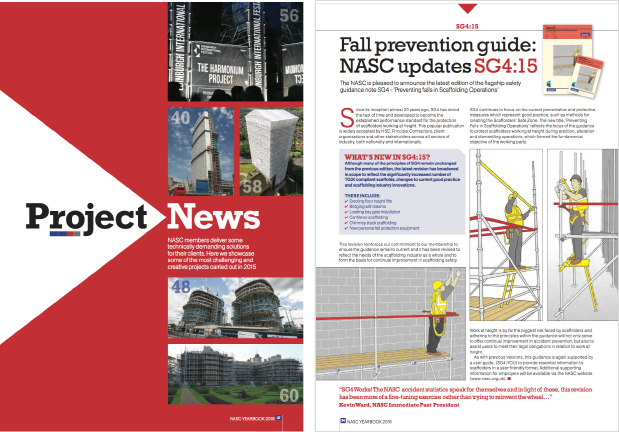 “Despite the fact that we live in a ‘digital age’ this publication seems to improve with every year. It’s clear that people still like to have a copy of the NASC Yearbook in their hands to read at their leisure. And again, the NASC Yearbook testifies to the unique skill set and versatility of NASC contracting members across the UK, with phenomenal projects on display.”

The 2016 Yearbook also features a number of articles from the chairs of NASC standing committees as well as listings and updates on CISRS training and SAEMA (Specialist Access Engineering and Maintenance Association).

There are details on NASC membership criteria, the NASC Code of Conduct, and a fully documented listing for all 260 NASC full contracting, hire and sales and information members.

In addition to the 96-page printed version, an e-reader version of the NASC 2016 Yearbook is available to view here and via the NASC website.