Mayor were they? CIOB disappointed at mayoral candidate no-shows at hustings 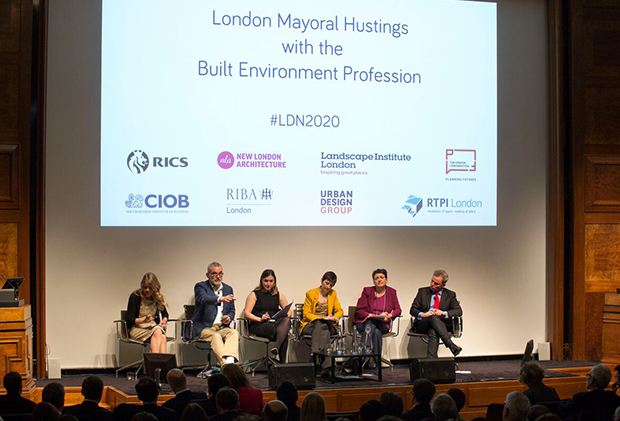 London mayoral candidates Sadiq Khan and Zac Goldsmith were not present at the hustings on housing, infrastructure and growth hosted by the CIOB, RICS and the RIBA this week.

Despite making housing a priority in the up-coming mayoral elections on 5 May, neither the Conservative nor Labour candidates attended the hustings. Their absence drew widespread  criticism, including from the CIOB’s chief executive, Chris Blythe.

Speaking to Construction Manager, Blythe said: “In the run-up to May’s London mayoral election, construction, housing and infrastructure have all been the main topics of debate for the candidates. So it was disappointing that neither Sadiq Khan nor Zac Goldsmith attended the hustings in person to outline their vision and speak to the people responsible for designing and building their plans.”

In his opening remarks Peter Whittle, the UK Independence Party candidate, addressed the elephant in the room saying: “It’s a great disappointment that neither the Conservative nor Labour candidates could be at one of the most important hustings.”

Although Khan and Goldsmith could not be present, the event was attended by Caroline Pidgeon, the Liberal Democrats candidate, Whittle and Siân Berry, the Green Party candidate. London assembly members Andrew Boff, representing the Conservatives, and Val Shawcross, representing Labour, also joined the debate.

Overall, the candidates largely agreed on the issues addressed during the debate. All of the candidates (and their stand-ins) believed that the city needed more housing; there should be no building on the green belt; they were not opposed to tall towers in principle, but they needed controlling; that the city needed greater control over its finances; and that building on brownfield sites was preferable but hard to do.

#LDN2020 the hustings were innocuous- you could separate the parties with a cigarette paper they agreed with each other so much.

Blythe, who was present at the debate, commented: “What the debate did tell us is that there is broad consensus on most issues affecting London’s built environment. The unanimous agreement on restricting the ability to build both up and out means London’s housing problem isn’t likely to be solved by 2020.

“The issue of airport capacity was also conspicuous by its absence: plenty of the candidates stated that London is the best city in the world, but if it is to remain so then a positive decision needs to be made on building new runways for the capital’s airports.”

Along with housing the other major issue facing construction, the skills crisis, was also frequently mentioned during the debate. All the candidates agreed that more needed to be done to encourage apprenticeships and training people to work in the built environment.

“The lack of construction skills in the pipeline could also further damage the next mayor’s housing and infrastructure plans,” said Blythe. “When I speak to construction firms, in and out the capital, I consistently hear about the shortage of home-grown skills being one of the biggest threats to growth in the sector. The next mayor must therefore ensure they have firm plans to train and encourage people to careers in the sector.”