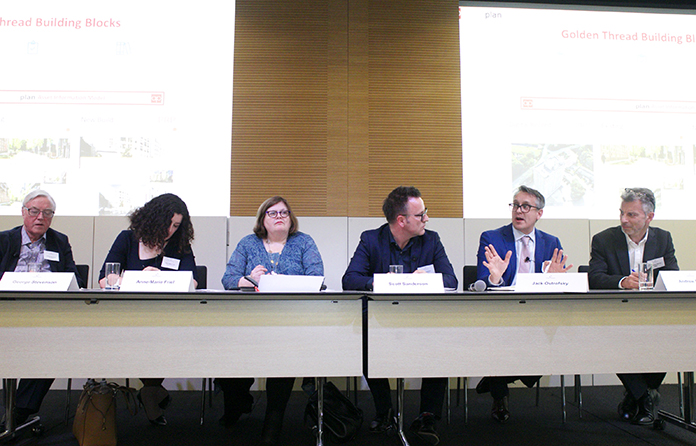 The panel discussing the ‘golden thread’

The head of design at a major housing association has blasted contractors for their inability to provide information about the buildings they have constructed.

Jack Ostrofsky, head of design and technical at Peabody, took part in a panel discussion at the Construction Manager/BIM+ Digital Construction Summit last week on the digital implications of the ‘golden thread’ advocated by Dame Judith Hackitt, in her independent review of Building Regulations and fire safety.

He recalled how, when working for another housing association, he was involved in eight latent defect claims against contractors over social housing blocks that were found to contain dangerous aluminium composite (ACM) cladding in the wake of the Grenfell Tower disaster.

Ostrofsky said: “Not a single one of the contractors for those eight buildings had accurate records. In many cases, the ACM cladding was substituted. There were discussions with their lawyers and my lawyers about whether it was legal or not but once I opened up the buildings, I had no problem proving latent defect claims because the workmanship in every case was appalling. The main contractor generally doesn’t know what the subcontractor is putting on the building that I am buying.”

Acknowledging that Peabody was “ahead of the curve” as a client, Ostrofsky nonetheless expressed concern about the construction sector as a whole.

He added: “We are all aware of the golden thread, but what is missing is the people in the supply chain to populate that information. Since about 2010, we have had a dramatic increase in the complexity in residential construction – and there are things that we don’t know that we don’t know.”

Scott Sanderson, partner – technical & BIM at PRP Architects, said: “I do think the industry is massively challenged to translate good process concept into day-to-day behaviour, and a new culture of quality. I am really hungry to see the conversation around quality of information, clarity of brief, clarity of process and quality control delivered and becoming meaningful in our projects.”

Andrew Pryke, managing director of BAM Design, also agreed that there was an “obvious need” for the golden thread. He explained how BAM was advancing its digital information capabilities, developing a systems operation and maintenance ‘golden thread’.

This was recently put it into place when it retrofitted Wharfedale Hospital in Leeds, which BAM had built 10 years previously with no data. The new system allowed BAM to provide accurate, detailed information to satisfy fire inspectors who later visited the hospital, Pryke explained.