It’s a hot summer afternoon in central London and a crowd of pedestrians has gathered to witness an unusual sight – a giant section of brick wall incorporating a large bay window is dangling in mid-air from the jib of a tower crane.

As the 5.5m-wide prefabricated concrete panel is deftly spun around by the crane, and stabilised by an operative pulling ropes on the ground, there is a sudden gasp from onlookers as a gust of wind swings it sideways. But the unit is kept under control, drawn flush with the facade and fixed into position, all in a matter of minutes.

The unitised facade is part of an ingenious offsite solution for the University College London Hospitals’ new centre for ear, nose, throat and dental services on Huntley Street near Euston.

Created by a team led by main contractor Mace and architect Pilbrow & Partners, the facade’s design aims to reduce onsite health and safety risks, improve quality and slash months off the programme – up to five of these panels will be installed today, and the entire envelope should be complete and watertight in just 13 weeks.

This has required considerable planning. Most of the 248 panels are hybrids that combine traditional handmade bricks, chosen to blend with the historic context, with precast concrete, aluminium and glass. The heaviest weigh 11 tonnes. Some of the perforated brick panels are entirely new to the UK and had to go through stringent testing to gain certification. Meanwhile, a bespoke lifting system was required to prevent the loaded bay window panels from flipping over when lifted by crane.

Nicola Scammell, senior project manager at Mace, says: “Prefab is often considered uncreative and repetitive but with the hospital being in a largely brick-built conservation area, a lot of work has gone into the fine detailing to ensure it is respectful to the architectural surroundings, but delivered in a modern and efficient way.”

The five-storey centre stands opposite a Grade II-listed Georgian terrace and next to Gordon Mansions, regarded as one of Bloomsbury’s finest Edwardian mansion blocks.

An earlier design proposal was thrown out by Camden Council, so the client, UCLH NHS Foundation Trust, appointed Pilbrow & Partners to carry out a conceptual redesign to secure planning permission. The firm is now acting on behalf of the client, providing the detailed technical design and overseeing construction of the facade. Scott Tallon Walker is executive supervising architect responsible for the clinical spaces inside the building. 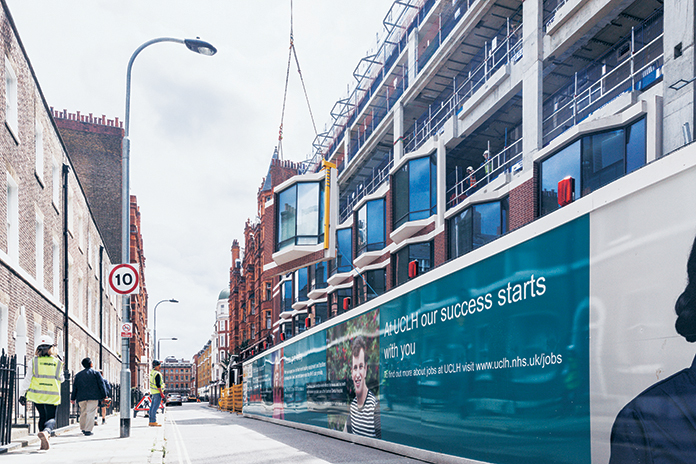 Above: The facade has been designed to blend in with the Edwardian and Georgian surrounds. Below: Torpedo fittings screw into halfen channels cast into the concrete

The healthcare plan was inverted to move the clinical space to the centre and push the waiting areas to the perimeter to take advantage of natural light. “We put together detailed technical information to ensure what we were proposing could be achieved in construction,” says Simon Smith, senior associate partner at Pilbrow.

The facade design takes visual and material cues from the local historic context which feed into the modular sections. The rows of wide bay windows on the front Huntley Street elevation mimic the scale and layout of those on Gordon Mansions, and the extensive use of red brick aims to evoke the largely brick-built Bloomsbury Conservation Area and industrial heritage.

The idea of modularising the facade was first mooted by Mace at bid stage and subsequently taken forward when it won the design and build contract and started on site in summer 2016.

Scammel says the biggest benefit of the modular approach is in programme. “Building the facade traditionally, by hand-laying bricks, would have taken 40 weeks; by unitising the panels we managed to reduce that to 13 weeks,” she says. “It takes various activities off the critical path, we simply get panels delivered ‘just-in-time’ to go straight onto the building.”

The flipside of that was an extended upfront design period as Mace and its team, including inhouse architect BMJ and structural engineer Clarke Nicholls Marcel, worked through the design and produced early prototypes. Most of this early work was carried out in parallel with excavation of the building’s four storey basement and construction of its piled foundations and reinforced concrete frame.

David Thomas, senior design manager at Mace, says: “Pilbrow & Partners incorporated quality brickwork and details and features that needed a great deal of thinking through. Going offsite meant these things could be tried out, tested, sampled and approved prior to being incorporated into the building.”

The unitised facade is a hybrid made up of separate elements manufactured by Swift Brickwork, curtain walling specialist Fleetwood Aluminium and precast cladding manufacturer Techrete. Under the Level 2 BIM strategy for the project, Pilbrow modelled each of the 160,000 handmade bricks prior to the manufacturing process. The completed panels are being assembled in Techrete’s yard in Brigg outside Doncaster. 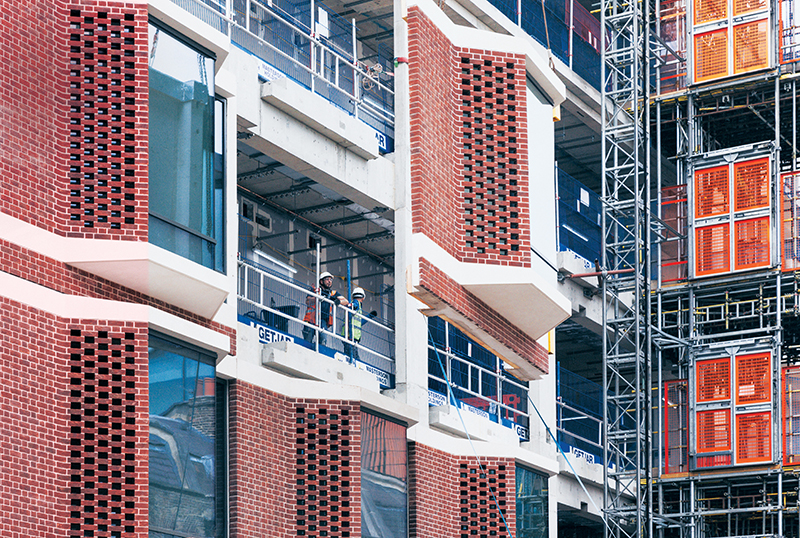 The panels are hybrids of brick, concrete, glass and aluminium

Model image showing the makeup of the facade panels

The large bays on Huntley Street are the most complex and include a perforated brick element, orientated south west to increase solar shading, a triple-glazed window element, and a precast concrete element. Each panel on levels one and two is around 5.5m wide by 4m tall, while slightly taller panels feature on the upper levels.

Spaces in the perforated elements reduced the contact area between the bricks, which increases the propensity for traditional mortar to crack when put under strain. An alternative solution was devised using ceramic spacers and a special adhesive to increase strength and flexibility. The method had never been tried before so panels had to go through rigorous testing to achieve the necessary certification and warranties.

The perforated brick panels on the Shropshire Place elevation raised one of the biggest challenges. Standard soft body impact tests (defined by the Centre for Window and Cladding Technology’s technical notes TN75 and TN76) involved a 50kg bag being swung at the mock-up, which caused it to wobble significantly. Steel fixings had to be introduced into the backs of the bricks to increase rigidity.

Thomas says: “You see similar brick details on farm buildings in Switzerland, but it is an aesthetic that’s never really been tested.”

The panels for the bays are fixed back to the RC frame using two fixings, billets that sit in pockets cut out of the edge of the concrete slab, and torpedo fixings that screw into halfen channels cast into the concrete, to allow final millimetre adjustments to get the panels plumb vertical.

Other unitised panels on the facade include corner balcony units, at the intersection of Huntley Street and Capper Street, that were cast into the frame as the concrete was poured.

The largest elements are 9m-high curved chimney sections at the base of the rear elevation, made of precast concrete inlaid with brick. The size was driven by the desire to avoid unsightly silicon movement joints in the brickwork, but pulses are sure to race as the first panel is dropped in later on in the build.

“We didn’t want the building to look like a patchwork quilt,” says Scammell. “We spent a great deal of time designing details to conceal precast concrete posts and remove the need for visible mastic joints between adjacent panels.”

Installation of the eccentrically loaded bays raised different concerns. A prototype had regular lifting eyes fitted on top, but when lifted the panel started to twist and tilt in the air, increasing the risk of torsion that could shatter the glass.

The unwanted movement was caused by additional weight on the front of the bay and the fact there was more precast concrete on one side. To counter the effect, Techrete designed a bespoke yellow steel frame that fits to the top and down one side of each panel to help keep it level and rigid when lifted.

Beyond the facade, Mace has tried to work prefabrication into the project wherever possible. Precast risers will be craned in, and horizontal distribution services. A mountain of kit, including giant ductwork, aircon units and a 13-tonne MRI machine, is required to run one of the most sophisticated hospital buildings of the current generation.

“There is a huge drive within the business to deliver offsite projects,” says Scammell. “Our ‘jump factory’ at East Village pushed the boundaries by creating a factory direct on the building site and prefab is now a major part of the highrise element of the business.”

The new centre, which brings together services from the Royal National Throat Nose and Ear Hospital and Eastman Dental Hospital, is due to open in 2019.

Achieving consistency of tone and colour was challenging, given the number of different brick types used in the panels

Some 160,000 bricks were used to create the unitised facade panels, all hand made by UK supplier Charnwood to traditional techniques.

Achieving consistency of material and colour was a challenge, given the number of different brick types. Bake a regular-shaped brick, a half brick and a brick with a key in the back (to bond with precast concrete) for the same time and, like loaves in the oven, you end up with different colours on the surface.

Pilbrow’s Simon Smith says: “The first batches were very slightly wrong tonally, but Charnwood was able to adjust the process to get what we needed.”

Every individual throws the clay into a mould in a slightly different way, so Charnwood hand-picked a team able to produce similar results.

Mace’s Nicola Scammell says: “The bricks used to make the perforated panels are thrown into moulds and the tops have to be scraped off to remove a slump in the brick before baking. The bricks incorporated into the prefabricated elements have a key in back needed to bond into the concrete, which means tapping the back of the brick after the clay is thrown to remove the slump.”

Two test panels were assembled by Techcrete for approval by stakeholders, including hospital staff.

“It’s difficult to see how you would achieve similar level quality with bricklayers splitting bricks out of palettes, carrying them up five floors and laying them one by one, especially four floors up in the wind and rain,” Smith concludes.