The chief executive of the body representing CDM coordinators has warned that any move to combine the role with that of a project designer or other member of the project team would be a retrograde step for construction safety.

Brian Law, chief executive of the Association for Project Safety (APS), issued the warning in the wake of HSE construction chief Philip White’s interview with CM last month. In the interview White called for an overhaul of the role of the CDM coordinator and for a reduction in the number of competence cards in the industry.

Law said: “There is absolutely nothing in the current CDM regulations that prevents designers or project managers filling the role of CDM coordinator on schemes. But the reality is that neither the design fraternity nor the contracting fraternity have shown a widespread interest in taking on the role. That’s why it is simpler and more effective to have a duty holder in the role. It clarifies responsibility within the project and removes ambiguity about who is responsible within the project team.”

The HSE is to issue a consultation document this spring on revising the CDM Regulations and the Approved Code of Practice, with implementation due in April 2014. One idea the HSE is believed to be considering is splitting the CDM-C role, so that separate CDM-Cs would be appointed for the pre-construction and construction phases, ensuring safety coordination is embedded in design and procurement.

Law added: “In Ireland the regulations state quite clearly that the CDM coordinator must be appointed at the outset of a project and I don’t see why that isn’t the case here.”

On White’s call for a cut in the number of health and safety qualifications and “competence” cards, Law said: “The principle of card schemes is fine, but I think the industry needs an over-arching authority that basically registers and approves, and streamlines, the courses and qualifications that site workers should complete.”

But he added: “Much energy and effort has been expended in trying to resolve these disparities by those parties whose interests are represented. I think we need to give these groups time to work through the process.”

From a subbies’ point of view, why are there schemes set up by individual contractors which need to be adhered to before you work on their sites? Why can’t there be one document that everyone adheres to? Bill Price

This might be fantastic news for the industry if Philip White and the HSE really get to grips with the bloated, self-serving training and accreditation schemes that have been pushed and cajoled into being by contractors and government bodies. Liam Power

It’s the HSE that lacks credibility. How many prosecutions have there been for clients failing to perform their duties? What interest do HSE inspectors have in anything other than what happens on site? David Truscott

A CIOB initiative is helping to clear up uncertainty over whether the CDM regulations apply to pre-construction archeological digs where there is a time lag between archaeological excavations and the arrival of the main contractor.

In 2010, CM reported how CIOB members Andrew Townsend and Howard Prosser had put together a working group to clarify when and how CDM applied to archaeological digs by producing HSE-approved guidance.

That group has since merged with the Federation of Archaeological Managers and Employers (FAME), which was already the main body co-ordinating H&S in the archaeology sector. Townsend joined FAME’s executive board.

The group met senior HSE staff last November, when the HSE indicated that CDM applied on all development-led digs, even when far in advance of the actual construction work.

Adrian Tindall, chief executive of FAME, told CM: “It now seems clear that development-led archaeology does fall under CDM, and will continue to do so under the new [2014] regulations. Contact with the HSE will continue, and we will be pressing for greater clarity in the revised regulations.”

Pre-construction archaeology is a regular feature of schemes in London, as at Stanhope’s 8-10 Moorgate (above) where Museum of London Archaeology recently investigated. Finds suggest the area was home to glass making, pottery production, metal working and leather working in Roman times. 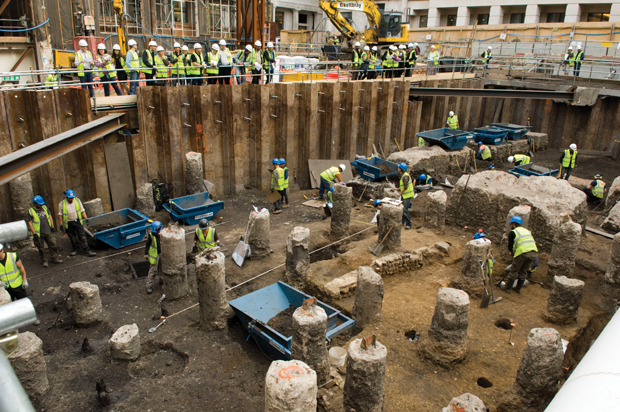