Khan backs Garden Bridge – but who are its ‘anonymous’ backers? 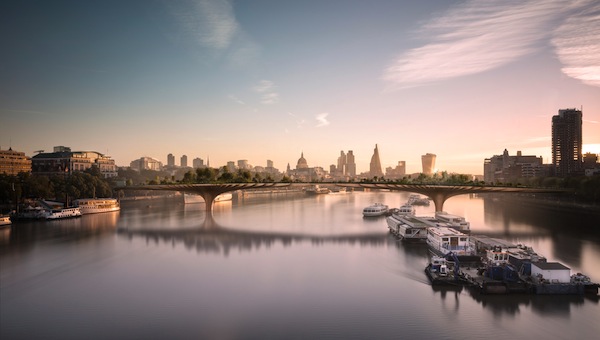 New London mayor Sadiq Khan has given his backing for the controversial Garden Bridge, but questions have emerged over the identity of the project’s backers.

The promoters of the scheme, the Garden Bridge Trust, are currently raising the last £32m of the £175m cost of construction.

Interestingly, of the donations received so far, 39% are anonymous, according to a document published by Transport for London (TfL).

Some £44m in total has been given by “confidential” or “anonymous” companies, trusts and individuals. The largest donation by a single individual was £4m, while an anonymous trust donated £1.5m. The government has promised to contribute a third of the funding.

The bridge will be privately owned but open to the public, except for 12 days a year. The Garden Bridge Trust’s business plan for how it will meet annual operating costs includes renting the bridge out for events, donations and selling sponsorship and merchandise.

However, the new London mayor has warned that it must be accessible to the public as much as possible.

Khan said: “The Garden Bridge could rival New York’s High Line but it must be a genuinely public and open space for all Londoners, rather than a closed and private space.”

The future of the crossing had been put in doubt after the new mayor began investigating predecessor Boris Johnson’s role in the procurement process.

Following this, Khan has published full details of the plan and its donors, saying the project’s development to date had “clearly fell short of our expectations on transparency”.

The bridge, which would link Temple station on the north bank of the Thames with the South Bank, is designed by Thomas Heatherwick with a garden and planting by Dan Pearson Studio. Arup is also advising on the tree-like copper-alloy structure as consulting engineer.