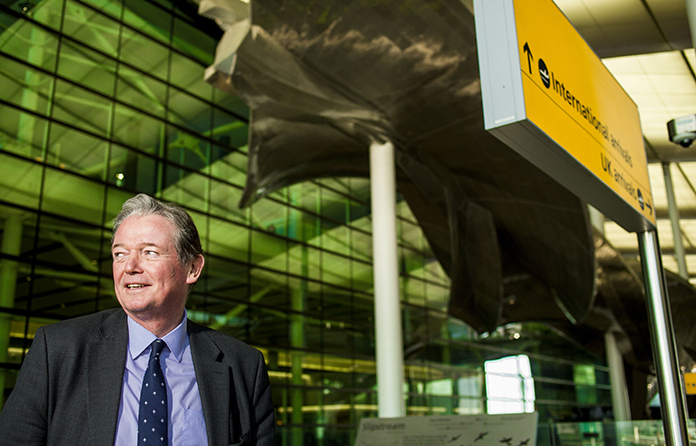 The £14.3bn Heathrow expansion programme will be delivered using offsite manufacturing as widely as possible. The airport’s director driving this strategy, Phil Wilbraham, explains his thinking to Will Mann.

And that certainly seems likely. Different procurement models, extensive use of offsite manufacturing and BIM are all part of the build strategy for the UK’s biggest airport, as it gears up to deliver the vast third runway project.

This is all being overseen by Wilbraham, who has been at Heathrow since 2003, and worked on the delivery of both Terminal 2 and 5.

Wilbraham’s plan is to spread the construction workload around the UK, using offsite manufacturing as widely as possible. He is currently running the rule over a longlist of 65 offsite hubs, selected from 121 applications, of which probably four will be selected as focal points for the assembly of major components of the airport’s expansion.

“We are visiting all of them, and we have been to 15 so far,” explains Wilbraham. “Over the next two to three months we will visit the others. We’re tying this in with business summits around regions, which involve our tier 1 suppliers.”

The plan is to go down to a short list of about 10 “towards the end of the year”, Wilbraham explains. “We will also issue a PQQ before then, as so far we have asked for limited information. And then announce the successful bidders in Q2 of next year. We are planning for four hubs, but there could be more.

“We want to select them early so that the hubs, and the supply chains which feed into them, can influence design.”

Heathrow has committed to spreading the hubs around the UK, and estimates that 60% of procurement spend will be outside London. There will be a consolidation hub – or “super hub” – at Heathrow, where some products will be taken through security so they can be assembled “air side”, Wilbraham explains.

At least one hub will be in Scotland. “We realise we will struggle for skills in the south east, so moving work away to the regions makes sense,” he says.

Road transport limits the size of products that can be offsite manufactured, which Wilbraham is well aware of, and says he is considering whether “flying factories” are suitable for some elements of the work.

“We would like the ‘nirvana’ of no hot works or wet works on site. These are skills for the factory, and on the site is about assembly. Steel frame contractors have been used to that for years, and precast the same.”

“Skanska has done exactly that on the 750m-long A14 River Ouse viaduct, effectively precasting the new viaduct alongside the site,” he says.

Wilbraham says the larger precast civil engineering elements, which may be harder to transport, are likely to be constructed at Heathrow. He is monitoring US trials of precast taxiways, both for the expansion programme and the airport’s regular work.

“Rebuilding in situ can take time, so if we can drop in premade sections, it would speed up the programme considerably,” he says. “These sections would be around 10m by 4m in size, so much bigger than could fit on the back of a truck, and would need to be cast in ‘flying factories’.”

The firms vying to be selected as offsite hubs include several construction industry big hitters, among them Balfour Beatty, Laing O’Rourke, which has a long track record at Heathrow, Severfield and Tarmac.

Wilbraham describes Laing O’Rourke’s Explore Industrial Park in Derbyshire as “a great factory”. But he adds that he sees it as “a precast factory, which would supply a hub, not a hub in itself”.

“The idea of the hubs is that they will have a supply chain around them,” he elaborates. “These factories could make precast concrete, fence posts, parapets – a multitude of components. The hub brings all this together and potentially assembles and consolidates these components into loads which are taken to Heathrow on a just-in-time basis. So they also have to be near good rail and road connections.”

Wilbraham says he wants the hubs and their supply chains “to grow with Heathrow” and also wants “other programmes to join us”.

Does that mean projects such as HS2 and Hinkley could make use of the hubs? “We are talking to eight other infrastructure programmes, including both of those,” he answers, and then adds, intriguingly, “we’re also talking to manufacturing. We think they could make use of the hubs. And generally, there’s a lot construction can learn from what other industries are doing as standard.”

An example of that is “off take” agreements with suppliers, common in manufacturing, where a client commits to taking a certain percentage of a supplier’s products for a fixed period. “We could decide to procure all of our fencing products, for example, from one factory, for say five years, so we are effectively reserving capacity in that factory,” says Wilbraham.

Once at site, most of the construction work at Heathrow will be what Wilbraham describes as “assembling”.

“We would like the ‘nirvana’ of no hot works or wet works on site,” he says. “These are skills for the factory, and on the site is about assembly. Steel frame contractors have been used to that for years, and precast the same,” he says. “It’s about being organised and planning the crane hook time.”

If onsite work becomes mainly about ‘assembly”, does that mean that the role of main contractors is bypassed?

In reply, Wilbraham says he envisages packaging up construction work on Heathrow’s expansion programme into four different types of contract.

“For earthworks, we expect to contract typically with ‘second tier’ suppliers, who own their own diggers and dumpers, Blackwell, for example,” he says. (Interestingly, Balfour Beatty recently invested in its own earthworks capability, buying 22 specialist machines.)

Utilities work, Wilbraham says, would be carried out by “specialists from that sector, using their own supply chains”.

With buildings, he continues, “we will look for an assembler, who might also be an ‘integrator’. That company might be a main contractor, or it could be traditional second tier contractor who steps up. Toureen, for instance, is traditionally a frame contractor but they are acting as principal contractor for a hotel project here at Heathrow.” 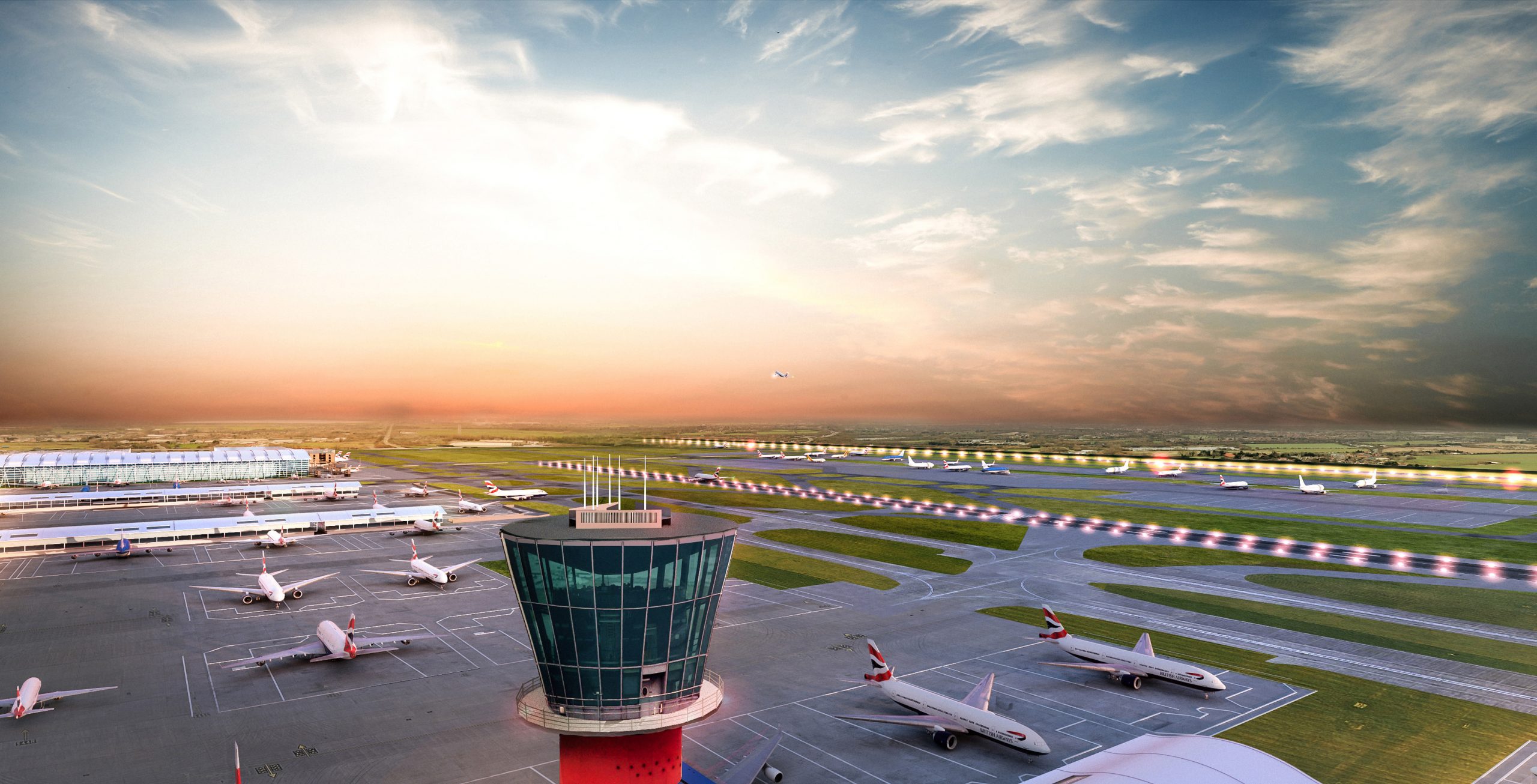 The new runway is expected by 2026

Main contractors, Wilbraham sees tackling major projects where there are significant logistical challenges. “So, moving the M25 would be handled by a main contractor; they have the organisational capability to handle that really well,” he says. “We would still want to see as much work precast or assembled offsite as possible, but the rest will be traditional construction processes which main contractors are good at managing.”

However, Wilbraham does envisage a changing role for main contractors – less about managing and more about executing. “There is room for vertically integrated contractors,” he says, “which employ large numbers of people, operate their own equipment, and own factories. Efficiencies come in when a business is set up like that – and at Heathrow we are looking for improvements in productivity.

“We think the government’s 2025 Construction Strategy takes the right approach on targets. Next year we will start setting targets, on cost, programme, quality. ”

A common BIM model will be “at the heart” of the Heathrow expansion, Wilbraham says. “We are in the process of creating that now,” he reveals. “A BIM model is currently being used for the masterplanning, and after the national policy statement has gone through parliament in the summer, we will get to a single masterplan in the autumn. This will be the model we will build off, and it will include design, costing and programme.

“We will work in a common data environment, where all the data is owned by the client, and then ask the supply chain to take sections out, work on them, and put them back into model.”

Could digital tech also have a role in construction execution, through use of robots and automated plant? “It will certainly be worth considering for the repetitive tasks, that have to be repeated 1000s of times – Crossrail has used a robotic drilling rig, for instance,” replies Wilbraham. “I can also see the potential with some site machines – the mining sector has autonomous trucks.”

As the Heathrow’s proposals slowly taxi towards clearance, Wilbraham is busy gathering other ideas for innovation – partly from his visits to the hubs, and also from his role as co-chair of Constructing Excellence.

He has just come from a meeting with the other co-chairs – Mark Farmer of Cast, David Whysall of Turner & Townsend – and describes the organisation as a “great place for sharing ideas, which brings all levels of the supply chain together”.

“Constructing Excellence is also very good at benchmarking,” he says. “Once we’ve got our targets set for the Heathrow expansion programme, we may use the organisation to collect the data and measure it.

“It’s all about building more productivity into what we do.” 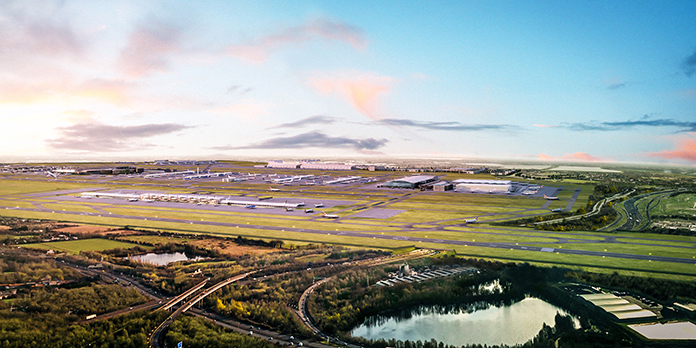 A consultation on Heathrow’s latest expansion plan closed at the end of March, and the airport’s proposal – in the form of the Airports National Policy Statement – now goes forward to a parliamentary vote in the summer.

Three options were shortlisted for the new north-west runway, with length varying from between 3.2 and 3.5km. Wilbraham says the exact length is still to be decided but he expects it will be “about 3.5km, give or take 50m to 100m”.

The M25 will be realigned as part of the plan, moving approximately 150m to the west, and lowered by 5m to 7m, where it will pass through a tunnel under the runway.

The exact location of the runway may also change by 50m to 100m in either direction, Wilbraham adds, though it needs to “tie in with the M4/M25 junction”.

“The road must be moved but still integrate with the existing network, the runway must tie in with taxiways, and rivers need to be diverted to go under the runway.”

Assuming the parliamentary vote approves the plans, a national planning application will go forward later in the year, with a final planning proposal going to the Planning Inspectorate in 2020, and then the transport secretary.

Construction work would commence in 2021, and the new runway is likely to be completed by 2026.