How can construction kick its plastics habit? 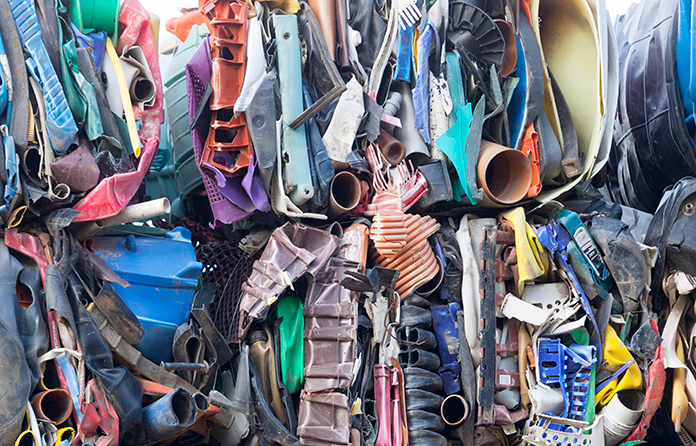 The global plastics binge is wreaking devastation upon the planet, so what more can construction do to drive down plastic waste and pursue a more sustainable model for reuse and recycling? Stephen Cousins reports.

When prime minister Theresa May declared a “war on waste” in January, with a pledge to eliminate all avoidable plastic waste by 2042, many critics asked if it was a case of too little too late.

With around eight million tonnes of plastic pollution entering the oceans every year and plastic microparticles found in drinking water across five continents, it’s hard not to be pessimistic about the impact on humans, animals and the environment.

Construction likes to pat itself on the back about its strong performance on waste, pointing to zero waste to landfill policies and the effective management of plastic waste streams, but the real picture is more opaque and, at times, concerning.

The sector still relies heavily on single-use packaging, principally plastic films, that are typically bundled up and incinerated at energy from waste plants. Large quantities of plastic end up in general mixed waste and are impossible to recycle either because they cannot be identified or they are contaminated with other materials.

Meanwhile, a failure to design new building components and materials for reuse or recycling threatens to leave a toxic plastic legacy for future generations.

Gillian Hobbs, director of resource efficiency at the Building Research Establishment (BRE), told CM: “From a site perspective we should be separating plastic sources into different material streams, even within the different polymer groups, because not all plastics are the same and not all can be recycled in the same way.

“And just because a product says it is recyclable doesn’t mean it can be recycled. There should be an emphasis on knowing what the material is, knowing that it hasn’t got contamination in it that will mess up the recycling process, and looking at how far it effectively has to travel to minimise the environmental impact of transportation.”

Plastic is lightweight, cheap, water resistant and flexible – making it something of a wonder material for construction. However, it is heavily reliant on fossil fuels for manufacture and its durability is paradoxically also its downfall: plastic that ends up in landfill is likely to take several centuries to decompose and some plastics release harmful chemicals into the soil, damaging water sources.

The issue has come to a head in recent months, particularly after China, a major importer of plastic waste from the UK, announced in January that it would ban the import of 24 grades of solid waste, including plastics, raising concerns that UK-based recycling plants will not be able to take up the strain.

According to the WRAP Plastics Market Situation Report for 2016, the UK construction and demolition sector was responsible for around 50,000 tonnes of plastic packaging waste in 2014 – well below the 1.53 million tonnes produced by the retail sector, but still significant.

Most plastic packaging is thin film, which is typically sent to waste transfer stations, where it is shredded, bundled up and shipped to energy-from-waste  (EfW) plants to be burnt to produce refuse derived fuel.

Kris Karslake, sustainability manager at BAM Construct UK, says: “We are seeing a general increase in plastic packaging, partly because more products are being manufactured offsite, from air-handling units to entire classrooms, which need a lot of protection due to the high value of the products, compared to individual component parts.” 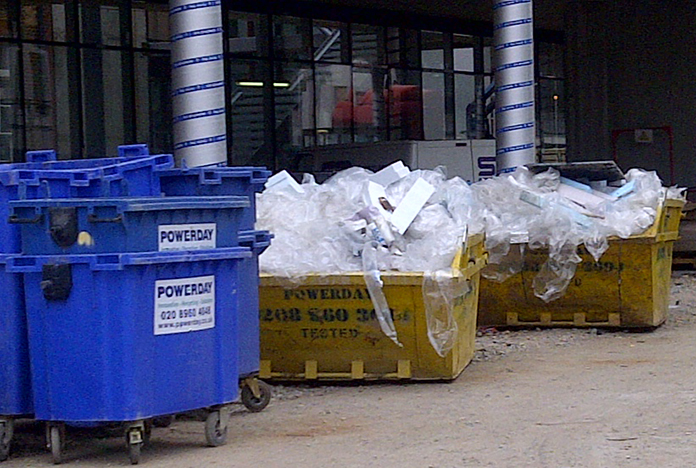 BAM is investigating the use of packaging materials that break down completely in the environment, such as a product formed from the root fibres of mushrooms that grow around organic waste, produced by US firm Ecovative.

“Anything biodegradable can go into an anaerobic digester, rather than an incinerator, which means much less environmental impact. It’s something we are hopeful about for the future,” says Karslake.

According to Charlie Law, director of independent sustainability consultant Sustainable Construction Solutions, in general about 25% of skips that leave site during the construction phase are filled with disposable packaging, including cardboard, timber and plastic. He has been working with contractors including BAM and Kier to assess alternative packaging materials and to encourage them to work with supply chains in order to design out packaging waste.

Fit-out contractor ISG produced over 100 tonnes of plastic packaging waste in 2017 and is now trialling a returnable plastic crate, developed in collaboration with metal ceiling tile manufacturer SAS, on a project for a financial services client in London.

ISG used 47 of the foldable crates to transport different sizes and shapes of tile on the project, in the process removing the need for 4,200 wooden crates with plastic sheet wrapping.

The switch required extensive planning with the supply chain, explains Peter Kelly, head of sustainability for fit out and engineering services at ISG, and chair of the construction and demolition waste forum at the Chartered Institute of Waste Management (CIWM). 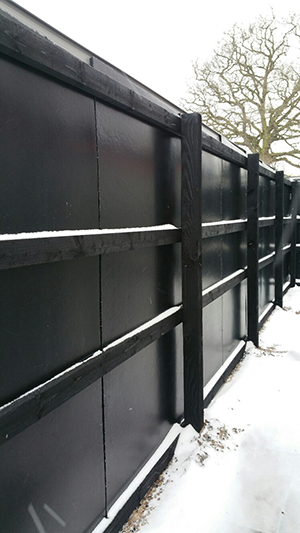 “We had to carefully work out the logistics to ensure the crates are palletised and returned,” he says. “SAS invested time and energy into creating the crates, working with the subcontractor installing the tiles and with our construction teams to ensure they understand the importance of what we trying to achieve and how to manage it.”

The trial proved successful and ISG is now looking to roll out the crate more widely across the business. “We really feel this could drive other manufacturers to change when they see the innovation that’s come from one of their rivals,” he adds.

Construction businesses across Europe produced 198,000 tonnes of plastic waste (excluding packaging) in 2016, 85,000 tonnes of which was mechanically recycled, giving a recycling rate of 43%, according to figures from PlasticsEurope. A further 57,000 tonnes went to energy recovery facilities, giving a recovery rate of 71.7%.

Only 6% of plastic coded as construction waste in the UK was sent to landfill in 2015, according to figures from the Environmental Agency’s national database. However, that’s not an accurate representation of overall waste arisings because large amounts of plastic also leave site as part the general mixed-waste stream.

The BRE recently completed a project with the European Commission to evaluate best practice approaches to dealing with mixed waste, and in most member states it was impossible to find sufficient data on the proportion of specific materials.

Annual survey figures on demolition waste, put together by the National Federation of Demolition Contractors (NFDC), also fail to include separate figures on plastics. “Given the current government initiative it may be something we have to start looking at in more detail,” says NFDC chief executive Howard Button.

Mixed construction waste in the UK normally ends up at waste transfer stations, run by waste management firms like Powerday or Kiely Bros, for onward recycling or energy recovery.

Such firms are committed to diverting waste from landfill, in part to avoid the high landfill tax of roughly £86 per tonne. Many try to take advantage of product take-back schemes like Recofloor, set up by vinyl flooring manufacturers Altro and Polyflor, and Take Back, by carpet tile manufacturer Desso, which aim to channel plastics directly back into their manufacturing processes.

“As a general approach, the industry needs to ensure products including composite materials can be easily broken down,” says Law. “For example, carpet manufacturers like Desso and Interface design carpets so that different layers, like the yarn and backing, can be peeled apart, recycled separately and made into new carpets.” 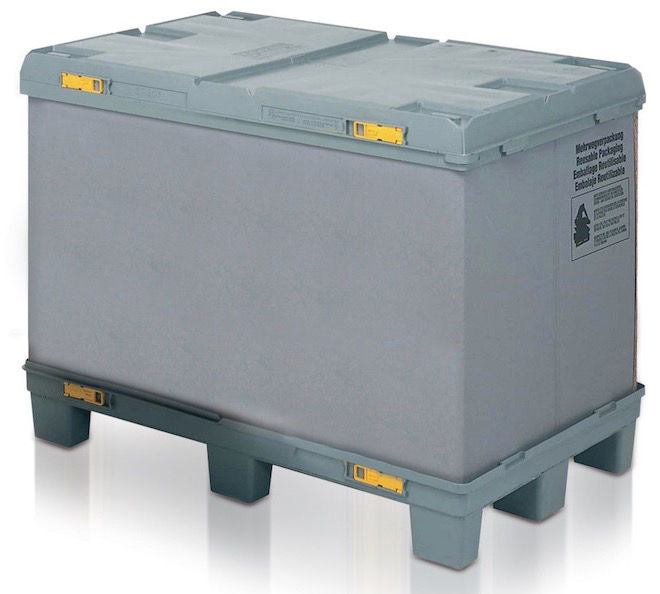 ISG, which produced over 100 tonnes of plastic packaging waste in 2017, is now trialling the use of a returnable plastic crate

While many construction companies claim to recycle more than 90% of their waste, the actual figures, based on where waste delivered to transfer stations ends up, are likely much lower, claims Law: “Up to half of the waste leaving a materials recovery facility (MRF) [effectively another term for waste transfer station] will be sent for energy recovery.

“This is based on Environment Agency waste returns I have seen for a number of the larger MRFs handling construction waste over the last few years. Energy recovery is still classified as diversion from landfill, but it should not be classified as recycling.”

One challenge of recovering and then recycling plastics is the wide range of products, including acrylonitrile butadiene styrene, polyethylene and polyesters, plus other materials within each product. In addition, plastics may be contaminated with other construction waste – for example polystyrene used in floor slabs or as concrete formwork is notoriously difficult to separate.

Demolition contractors focus heavily on separating out different waste streams for recycling and energy recovery, to avoid having to pay landfill tax and tipping charges – the industry averages a 96% recycling rate – but sometimes the lack of information on specific materials works against the process.

“The co-mingling of different types of plastic does not help; it’s almost impossible to identify the type of plastic and the product as they don’t have product numbers,” says Button.

In an effort to make better use of problem plastics, Kier Environmental Services has developed a recycled replacement plywood hoarding made up of various polymers it collects from local authority and industrial and commercial clients.

“We are seeing a general increase in plastic packaging, partly because more products are being manufactured offsite.”

The product is currently being trialled by Kier’s construction businesses and can be reused several times before being recycled again. “It outperforms ply sheet at every level,” says Julian Tranter, managing director of Kier Environmental Services. “We are developing the further use of recyclates into construction products, for example the use of cellulose fibre as an insulator.”

Looking to the future, there are hopes that a shift towards a circular economy will eliminate the categorisation of plastic products and materials as waste and ensure they are able to sustain their value through reuse or recycling.

Exponents of the movement have envisioned a scenario whereby building products and systems, such as ceiling tiles, carpets, raised access flooring or cladding, are no longer bought outright but leased from manufacturers who reclaim them at end of life and reuse the components, or feed them back into production processes.

ISG is about to sign up to the UK Green Building Council’s Circular Economy programme, a new two-year programme of research and testing set up to demystify the application of circular economic principles on real estate and construction projects.

Meanwhile, the BRE is one of 15 partners from seven European countries exploring circular options for building materials through the Buildings As Material Banks programme (BAMB), which is currently running six pilots.

The project is exploring methods for recording the products that go into buildings and how they are assembled to optimise options for reuse and the lifetime extension of systems in buildings.

The project is also developing a new form of materials passports, intended to provide enhanced information on the composition of products and materials and their design attributes, which should make it easier to identify the best route for reuse or recycling.

If such data is tagged to objects in BIM models, including the supplier URL and details of its take-back scheme, it could provide a much more effective and transparent method of closing the loop.

Innovative solutions like these could soon come to the fore as countries worldwide attempt to stem the flow of toxic plastics for future generations.