How artificial intelligence will transform construction 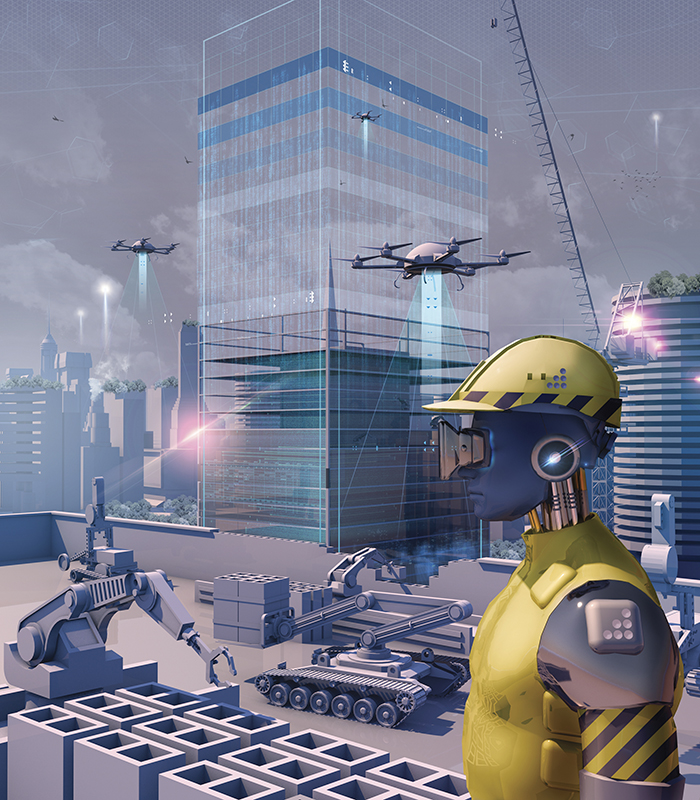 The rise of artificial intelligence is already leading some forecasters to predict a startling vision of construction in a generation’s time – where roles traditionally carried out by human beings are instead performed by robots. Denise Chevin examines which areas of the industry will be most affected.

The rise of artificial intelligence (AI) is the great story of our time. Those who have delved online to find out “Will a robot take my job?” might take comfort that design and construction professions such as architects, quantity surveyors or construction managers are low on the list of professions likely to be replaced by machines, compiled by scientists from the Oxford Martin School at Oxford University in 2015.

But that belies the profound impact experts say artificial intelligence and machine learning will have on the roles of both trades and professionals in the built environment. It’s early days, but we’re already seeing a plethora of prototypes providing glimpses of how design and construction activity might change.

There’s software that crunches building codes to generate different design variations, software that helps construction firms to spot safety failures, and the development of self-driving excavators guided by drones. It won’t happen overnight, but AI is seen as a key ingredient to help the industry boost productivity and potentially provide an answer to the skills gap.

A report from construction firm Mace, based on the Oxford University statistics, forecasts that 600,000 trades jobs will disappear by 2040 as the industry heads to the so‑called fourth technological revolution, which includes AI and the Internet of Things.

“Although there is a lot of misdefinition and hype around AI we believe it will ultimately have a profound effect on the built environment landscape,” Philp believes. “AI will allow us to take real meaning from our data – both new and legacy – supporting the smart and self-adapting building agenda. AI could also help solve adversarial issues which we believe will enable new forms of outcome-based transactional contracts.”

AI, of which machine learning is a major branch, represents a fundamentally different approach to software. The machine learns from examples, rather than being explicitly programmed for a particular outcome. It might not be obvious, but it’s already found a place in everyday life, from searching for images on smartphones purely by typing in the subject to the emergence of intelligent digital assistants such as Siri and Alexa – now capable of holding conversations with humans.

“History shows that when machines took parts of jobs over they created high-level jobs in return.”

In the past AI has been touted as the next big thing, but the confluence of greater connectivity and availability of huge amounts of data emanating from processes like BIM and sensors, coupled with computing power to recognise patterns in that data, has created a fertile environment in which research and development in AI can thrive, explains Tatjana Dzambazova, AI strategist with Autodesk.

Its first publicly available machine learning-powered tool focused on construction is BIM360 IQ, which uses machine learning to predict issues such as subcontractor risk. “It can advise the superintendent [manager] of the performance grades of subcontractors and their historic data in order to make sure he/she picks the right teams. All this is possible thanks to historic data of over 27 million documented issues from ten years of BIM field data that were used to ‘train’ the system,” she says

No one can say for sure just how smart machines might become, but in the medium term futurologists developing the technology suggest that construction professionals should look to artificial intelligence not to take their jobs, but to augment their skills – to provide them with superpowers, as it were.

“I think history shows that when machines took parts of jobs over they created high-level jobs in return,” says Ákos Pfemeter, vice president of marketing at Graphisoft. The developer has embedded AI into ArchiCAD 21, the latest version of its BIM modelling software. This includes predictive technology to automate stair design, a complex aspect of projects which has to take on board hundreds of design codes.

Pfemeter highlights the potential of AI in the sector: “There are definitely three areas in construction where we can see the most potential. These are building design and analysis, construction technologies, and lastly building operation – arguably the most advanced area of the three.” In the following pages, we look at recent developments in those sectors in more detail.

But as AI is picked up on the sector’s radar, expect it to generate more than a few ripples. “Yes, automation technologies exist and are being used – particularly with regard to parametric design [a process based on algorithms] – but they are not widespread,” says Phil Langley, director at Bryden Wood.

“AI has not yet ‘landed’ in the design and construction industry, not just because of the technological maturity, or the skills gap that clearly exists, but also because the industry has not yet confronted the consequences – in terms of skills, labour, business models – or the shockwaves that would be produced by the widespread adoption of AI.”