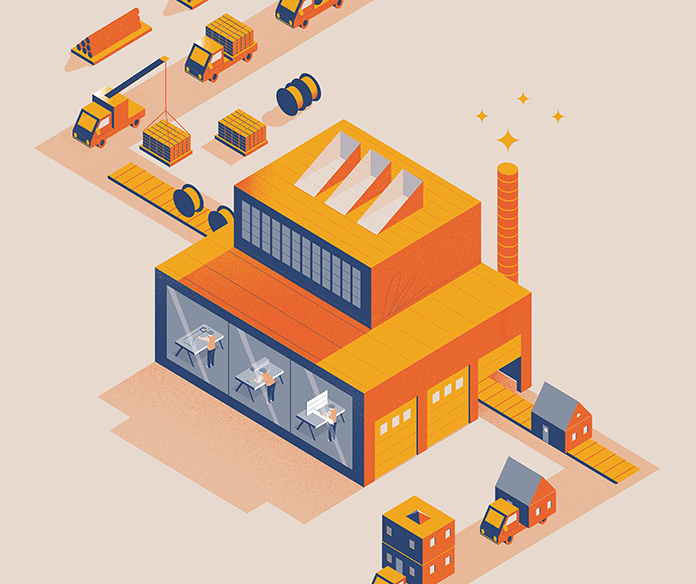 It’s been a year since Mark Farmer’s hard-hitting report Modernise or Die advocated the use of offsite as one route to curing the industry’s ills. With government backing, new players moving into the sector, and a post-Brexit skills crisis looming – has its moment arrived? Will Mann reports.

A year ago, offsite manufacturing was espoused by Modernise or Die, the report by Cast consultancy chief executive officer Mark Farmer, as a potential panacea for many of construction’s ills.

We have been here before, of course. The Egan report of almost two decades ago wanted the industry to adopt the factory processes of the car industry, and former deputy prime minister John Prescott was a keen cheerleader before he, New Labour and the offsite agenda were blown asunder by the 2008 financial crash.

Are things different now? Farmer, whose report was mostly endorsed by the government in the summer, believes so.

“There seems to have been a shift in sentiment,” he says. “There is increased awareness of the resourcing issues the industry faces. People realise we are on a burning platform.”

The last couple of years has seen new entrants to the offsite market (see box, p20), such as Legal & General and the China National Building Material Company (CNBM), while established construction players like Mace and Aecom are working on huge factories in east London.

The elephant in the room is Laing O’Rourke, arguably a trailblazer for the offsite sector among main contractors. The firm ran into problems on some of its design for manufacture and assembly (DfMA) contracts, which it blamed on the recession-era slowdown in public spending, and subsequently postponed the planned expansion of its Derbyshire manufacturing plant.

“The level of investment required for offsite factories is not for the faint-hearted,” says Farmer.

“Having a design code and accreditation will provide standards that the offsite manufacturing supply chain can align with that.”

“At present there is a predictability-continuity gap, which makes offsite companies nervous about investing,” says Dennis Seal, sector lead for housing at trade body Buildoffsite.

“A key enabler is how the market organises itself,” says Farmer. “Demand aggregation can give greater certainty of supply. The government has a role to play here.”

Could that mean, for instance, local authorities joining together to provide “offtake agreements” – a common practice in manufacturing – for delivery of the promised new wave of council housebuilding?

“It would be difficult for the government to intervene there,” answers Farmer. “But social housing should be a big supporter of offsite manufacturing. Where there’s central grant funding for social housing, the government could stipulate that there must be an offsite solution.

“Traditionally construction is a very cyclical market. To encourage offsite manufacturing, there needs to be a longer line of sight. Procurement needs to be programmatic rather than project by project.”

Farmer notes that the Greater London Assembly has made a statement of intent, in Nicky Gavron’s Designed, Sealed, Delivered report last August, which called on the mayor to use his influence to promote the technology, suggesting a framework for offsite providers and a kitemark scheme.

“The mayor can shape not just how many homes are built, but how they are built,” Farmer points out.

“The kitemark is also an important recommendation. Having a design code and accreditation will provide standards that the offsite manufacturing supply chain can align with that.”

“There is a cottage industry of small players at the moment, providing bespoke products. Some of their differentiators are due to IP. But for the sector to mature, there needs to be more commonality.”

“It’s important not to reinvent the wheel every time,” agrees Seal. “Clients have a role here too. They need to think of the Henry Ford Model T analogy when they’re procuring – the more they alter the product, the more money it will cost them.”

The offsite market currently comprises a diverse range of companies. At one end, volumetric providers deliver fully fitted-out modules or whole buildings, with 80% or more of the project build taking place in the factory. And then there are other players who provide pre-assembled components – precast beams, light gauge steel, floor cassettes, M&E modules, kitchen pods and much more – which are put together by main contractors on site.

It is this latter methodology that Mace has adopted at East Village in Stratford, London, where it is constructing two residential towers 30 and 26 storeys tall. The firm is using a “jump” factory on site to assemble the components for the build, with the whole floorplate of the project encased in a giant “marquee” structure. The top of the marquee is supported by gantry cranes which are used to lift components to the working deck.

“We are bringing together all the offsite innovations we have used on other projects,” explains project director Shaun Tate. “The structure is 98% precast, and we have bathroom pods, utility cupboards, horizontal risers, cladding, fit out elements – all these components are made off site and then assembled here.”

The marquee protects against the wet and windy “micro climate” of Stratford, Tate explains, particularly the risk of downtime if cranes are winded off.

Mace sees its approach at East Village as challenging preconceptions that offsite manufacturing creates “identikit” buildings. “There is significant repetition here, but our approach respects the base design of the architect and the servicing strategy,” says Tate. “We don’t tell clients ‘you need to change this or that’.

“This means that, for example, we don’t need to have columns at every 3.5m. Here, even though the frame is almost entirely precast, we have a structural grid with spans up to 9m. With a fully modular approach, because we have to transport modules by road, that wouldn’t be possible.”

Tate says the approach puts greater focus on early design coordination. “We have 50mm diameter square holes in precast sections which pipes run through to connect service modules,” he says. “So we have to be very accurate. But with BIM, we can rehearse this in a digital environment.”

For site workers, Tate says Mace has provided familiarisation – rather than training – for the new approach. “Construction has historically been about different trades operating in silos, whereas in the factory environment, people have to work together more, and be efficient at their stage of the process, otherwise the assembly line slows down,” he says.

Mace has made a substantial investment at East Village, and while Tate is reluctant to say how much, he says the firm is on a “learning curve” and expects to feel commercial benefits when it takes the principles to other projects. “I don’t think the scale of project is an issue, it’s more of a change of mindset,” he adds. 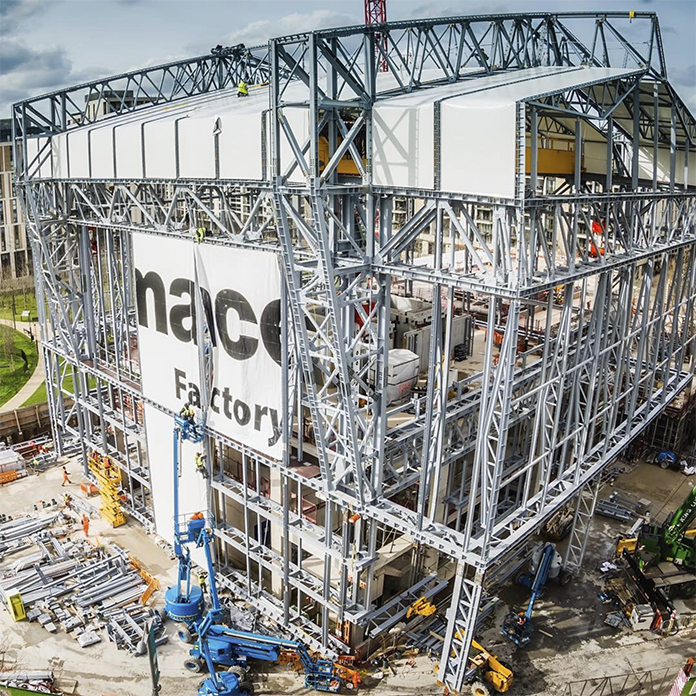 At the modular end of the offsite spectrum, Vision Modular has pushed use of volumetric construction to new levels – or rather, heights.

The Bedford-based modular outfit worked with its developer/contractor partner Tide Construction on the tallest volumetric building constructed in Europe to date – the 90m-high Apex Tower in Wembley, built from 679 modules – and the pair recently submitted plans for what would be the world’s tallest, a 42-storey scheme in Croydon which would require almost 1,500 modules. Managing director Kieran White believes above 50 storeys is possible, but says “we are learning from each scheme we do”.

Speed of assembly is one of Vision’s main selling points. Large schemes such as Apex Tower begin detailed design six months before delivery of first modules to site. Vision manufactures modules at a rate of 40 a week, and can install at 60 a week, meaning a large “stockpile” of units is needed to achieve maximum programme efficiency. “At Wembley, we had 200 ready before work started on site,” says White.

The modules themselves are steel framed with concrete floors, so Vision is effectively “building the structure”, as White put it. The modules are connected around a central concrete core, which provides lateral stability, and cladding is fixed on afterwards.

“With our projects, the delivery has to be bang on time. This is where the supply chain needs some education.”

With Vision’s processes being largely factory based, supply chain and logistics management is far more critical compared to in-situ construction. “On a traditional project, a delivery of 100 doors can arrive within a fairly loose time frame,” White says.

“With our projects, the delivery has to be bang on time. This is where the construction supply chain needs some education. In the car industry, suppliers tend to group locally around the manufacturer. I’m not saying our suppliers need to relocate, but they need to adjust their way of working.”

Vision also has different requirements of its workers, who are from a mixture of manufacturing and construction backgrounds. “What we look for is flexibility, rather than trade specialists – people who can do plumbing one day, then kitchens another day,” says White.

His factory employs 180 on its factory floor, producing 2,000 modules a year – effectively 1,000 one-bed apartments – and White plans to expand in 2018, with the long-term aim to take annual production capacity to 4,000 modules. It is a significant capital investment in its factory, and means large overheads.

“We have a lot of repeat business now, which provides predictability,” says White. “Offtake agreements are an aspiration.”

Vision expects a planning decision on the Croydon reaction by the end of the year, and White says the local authority has made positive sounds due to the limited disruption caused by the build methodology.

“This is becoming a common reaction from planning authorities,” he says. “We take clients and planners around live projects to demonstrate the approach. Clients are becoming more mature, appreciative of a different way of working, and I see no resistance from architects.”

For modular players such as Vision, who can deliver such a high proportion of a project in a factory, they will increasingly be capable of “acting as Tier 1 contractors on large, mostly standardised schemes”, says Seal.

That change is in the air is evidenced by the “disruptors”, such as L&G and CNBM, which have entered the market recently, Farmer notes.

“Foreign companies with offsite expertise will be eyeing the UK sector because there is a supportive government, a shortage of housing and the barriers to entry are relatively low,” he says. “That represents a threat to the UK domestic market. But it can be seen as healthy competition.

“This is a real challenge to the UK’s traditional ‘lump sum’ main contractor model. It doesn’t work. Look at the big financial hits most of the big names have taken recently.”

Meanwhile, as the offsite sector grows, Buildoffsite is working with the Construction Leadership Council to capture information on the market. “It has historically been hard to measure the offsite sector in terms of size and performance,” says Seal. “We have relied on pilot schemes. We want to work out an annual measurement of the size of sector, broken down by specialism, which will help us plan future workflow.”

The offsite disruptors changing the rules of construction 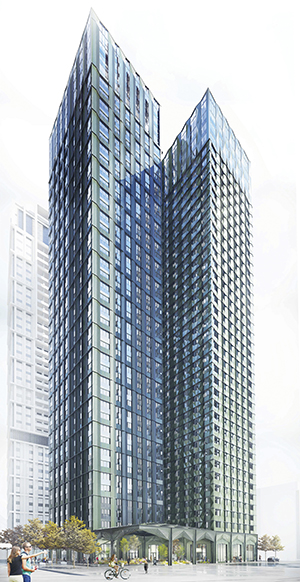