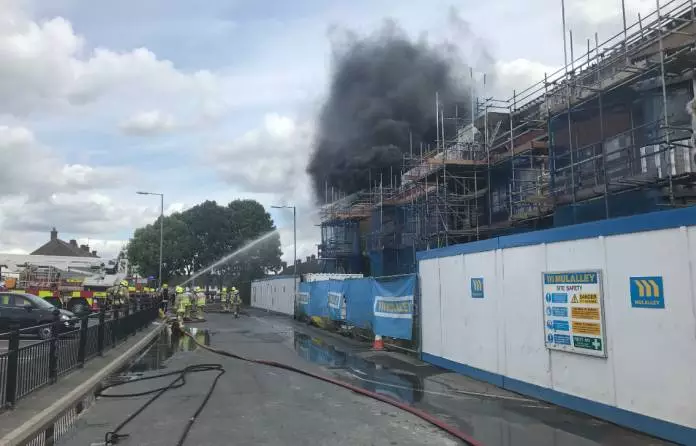 The fire at the Mulalley development on 17 August

The fire on 17 August at Burton Road in Loughton, Essex, began on the third storey roof of the building, which has a smaller fourth storey forming a penthouse-type structure. The contractor is understood to have been in the process of completing installation of the insulation when the fire broke out. It is thought to have been started by a tar heater.

Mulalley is building the £10m affordable housing development directly for the local authority.

Epping Forest’s assitant director of housing Paul Pledger told the council’s housebuilding cabinet committee: “It has been suggested that the cause of the fire was an equipment failure relating to a tar heater on the roof of the building, but this has not been confirmed. We’re awaiting for clarification of the exact cause, but this ignited the polyurethane insulation on the roof. It was the roofing insulation burning that was the cause of the plumes of black smoke that could be seen. We’re still awaiting from the contractor confirmation of the exact type of insulation material in use.”

A statement from the council said: “The insulation had just been laid and was therefore exposed because the contractor was at the final stages of encapsulating it. A living green Sedum roof was then to be applied, further protecting the insulation from exposure and completing the fireproofing process. It is fair to say that in isolation, many materials used in any building construction are deemed flammable alone. Had the whole construction process been completed, the fire would not have happened in the same way.

“Had there been people within the building when it caught light, not that it would have [burned] in the same way had the building been finished, there is every indication that everyone inside would have been able to leave the building safely.”

The partially completed building remained remarkably unscathed after the blaze, acccording to Mulalley. In the immediate aftermath of the fire, the firm said: “Although the building was subjected to intense fire and large volumes of water, there was no fire, water or smoke damage to areas other than two flats and roof coverings. Works to the other 49 homes continue to progress.”