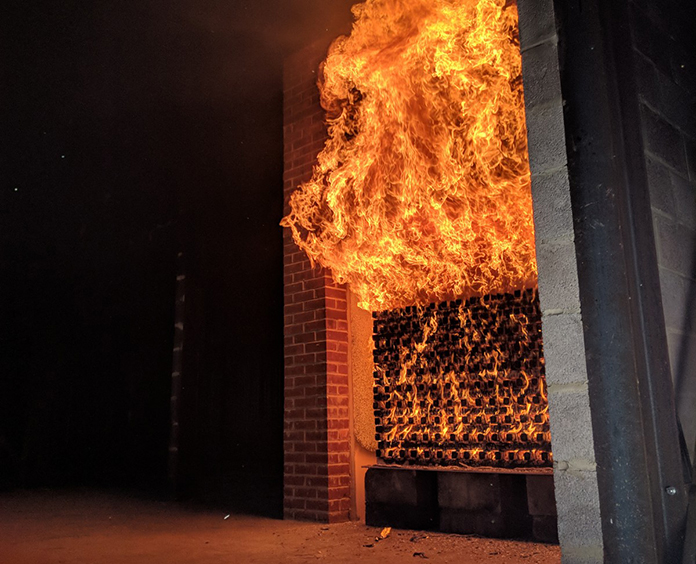 Could a new facade fire-testing alliance provide the market with a much-needed shake-up? Neil Gerrard reports.

After the Grenfell Tower disaster, the way cladding products are tested for fire resistance is under scrutiny like never before.

Meanwhile, the Hackitt review has criticised the scope and effectiveness of fire safety tests, and the limited number of testing centres. The main test standard, BS 8414, has also come in for criticism.

Against this backdrop, a new facade fire-testing alliance has been set up by safety consultant UL and the UK Fire Protection Association (FPA).

The two-part BS 8414 test dates back to 2002 and was revised in 2015. Also known as the “garage test”, because it is supposed to simulate a fire coming out of a garage and up the side of the building, it essentially measures fire spread up and slightly across a facade.

Alternatives to BS 8414 include a Swedish standard that is reasonably similar and a US one which is somewhat different. But for the most part, BS 8414 dominates in the UK.

The options on where to have products tested to BS 8414 are currently limited. BRE conducts the lion’s share of the testing, while there is also a new rig operated by Efectis in Northern Ireland, and another that tests to BS 8414 in Dubai.

So where are the failings in the current fire testing regime and what is likely to change?

For large-scale testing of cladding systems, the two-part BS 8414 standard (see box) is the most common test. Insurers, for one, are not happy with the state of play. In April, the Association of British Insurers (ABI) released details of research it commissioned the FPA to carry out, which it said exposed the “utter inadequacy” of the laboratory tests currently used to check the fire safety of building materials.

In the case of tests on cladding, it warned that materials were sometimes tested as a sealed unit, whereas on a building they were likely to include gaps and cover a far more extensive area.

In its Hackitt submission, the ABI called for a reformed testing regime that replicates real-world conditions, and a ban on combustible materials. Hackitt stopped short of this, but the government quickly launched its own consultation on banning combustible cladding for high-rise residential buildings, with the findings expected to be announced in October.

An outright ban (on all buildings) is unlikely, according to Tom Roche, senior consultant with insurer FM Global. “Practically, I don’t think that is going to happen, but testing standards may become much tougher,” he says.

A concern for Roche is if cladding is combined with other products: “If you combine ACM and insulation, and add a weather-resistant barrier or vapour barrier, then there are enough combustibles in there to be concerned about.”

Abroad, FM Global performs its own test on cladding, a “parallel panel” test it claims is more stringent than those used in the UK.

Roche doesn’t see any major issues with the BS 8414 test. “Actually, BS 8414 is probably towards the top end of the international tests that are available,” he says. But he worries that few products undergo practical tests to BS 8414 and too many have been approved on the strength of desktop studies (which the government has already committed to ban).

“Normally tests are done by people who know what they are doing, with an understanding of fire testing and a good engineering background, but there are no real rules to make that happen. I’m not sure enforcement of our own regulations has been strong enough.”

“There is no real governance of desktop studies,” warns Chris Miles of UL. “People will test a relatively safe option, get a result, and then extrapolate from that. So a manufacturer could do a test and then an assessor could allow all sorts of changes from it.

“Normally tests are done by people who know what they are doing, with an understanding of fire testing and a good engineering background, but there are no real rules to make that happen.

“I’m not sure enforcement of our own regulations has been strong enough.”

Through its new alliance, UL will invest in the FPA’s existing facilities, with the aim of increasing the capacity and quality of large-scale fire testing of cladding and building systems to BS 8414. At the moment, UL is holding back while it awaits the results of the government’s consultation on banning combustible cladding.

“If the government decides on a complete ban there is no point doing any sort of large-scale testing,” says Miles.

There are also changes expected to BS 8414. When asked by CM, BRE said it couldn’t give a clear-cut answer on whether BS 8414 would still be relevant after the government’s consultation because it is a “fluid and complex area”.

It said: “We are pleased that the FPA and UL have decided to contribute to the future development of BS 8414 within the BSI standards process. They have put forward their views in the published ABI report and we are aware that there are wide ranging and often contradictory technical opinions to those expressed in that report, some of which are also in the public domain.

“We welcome this potential extra resource. Along with the new rig in Northern Ireland, this will help deal with the unprecedented demand for the test since Grenfell. Having new facilities that can test to the existing BS 8414 standard, which BRE will continue to do, will strengthen the fire safety sector as long as those facilities are UKAS accredited and operate within its tough quality framework.”

BRE pledged to work with all stakeholders to deliver the next version of BS 8414. What is still not clear though, is what that version will be, or how it will be enforced.