Drone takes to the skies on Costain project

An unmanned flying drone has been recruited to the surveying team by a Costain-led joint venture working in a £130m road expansion scheme in Northern Ireland to shoot detailed footage of the route.

Contractors Lagan Construction, Ferrovial Agroman and Costain are widening a 14.5km stretch of the A8 road between Belfast and Larne to boost capacity on a strategically important route.

The 350mm2 drone resembles a helicopter with four rotors, fitted with a bolt-on video camera to enable the JV’s surveyor to fly it over the site using a remote control and take detailed videos. The trial was set up to test the system’s capabilities and train one of the JV’s surveyors to receive a licence required to operate the vehicle. 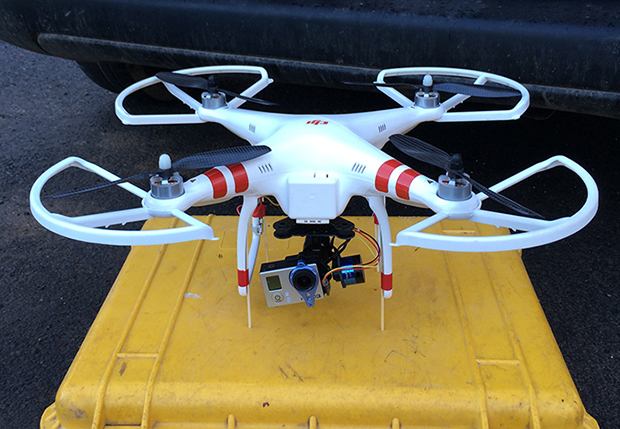 The drone has several advantages over using a full-sized manned aircraft to complete aerial photography, said the JV’s deputy project manager John Lee: “Using a real aircraft there are limitations on how low it can fly and weather can reduce visibility, whereas using a drone you can hover and get in close to structures. The system records high-definition footage, from which stills can be taken.”

The JV was previously using full-size aircraft for aerial photography, but the drone costs a fraction of hiring a manned aircraft, and the licence required to operate it is also cheaper than a conventional pilot’s licence.

In addition, using a drone to examine tall structures on building sites helps surveyors avoid the health and safety dangers of working at height, says Lee.

Apart from surveying, the drone came in useful following a road traffic accident on the A8 in December when it was flown in to record the incident scene and examine how local traffic management was set up.

Costain’s group innovation and knowledge manager Tim Embley has been impressed with the results of the trial and is looking at getting fixed-wing pilots trained up on the device. A special licence is required to operate the drone, but this is also considerably less expensive than gaining a “normal” pilot’s licence.

“From the highways sector point of view, we would like to look at further applications and possibly get some people trained up. I think there are definitely applications within the company that we could use it for,” he said.

Work to upgrade the A8 to a dual carriageway began in August 2012 and is due for completion in Spring 2015. The project is designed to help grow the local economy and contribute to wider economic development in Northern Ireland. It involves upgrading 14.4km of the existing A8, and a number of junctions and bridges along the scheme.