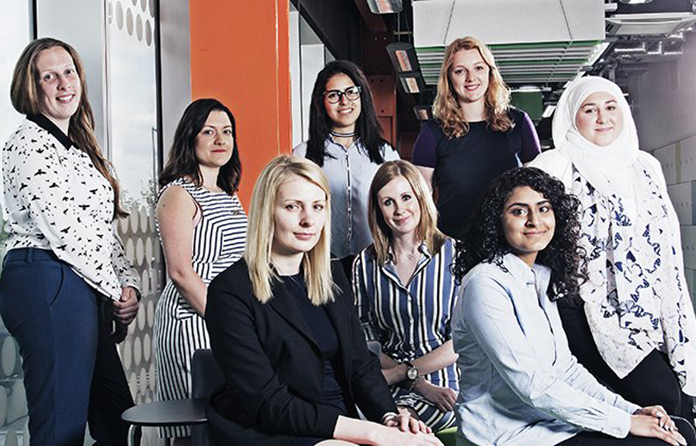 Loughborough University brought together a group of women graduates working in diverse industry roles to talk through the issues that affect them day to day. Saba Salman listened in. Photography: Leon Csernohlavek.

Construction is still struggling big time with the attraction and retention of women. While there has been a welcome spate of senior women appointments, such as Roma Agrawal as Aecom’s associate director, and Katy Dowding as Skanska’s executive vice president, across construction in general, the woefully small number of women is a well-documented problem.

According to figures from the Office of National Statistics, women account for just 12.8% of the workforce, and make up only 1% of the manual trades workforce, according to campaign group Women on the Tools.

Then there is the gender pay gap – the construction and building trades’ supervisors have the highest in the sector, with men paid 45.4% more than women. Little wonder then that the number of women in construction has dropped by 17% in the last 10 years, compared to a 6.5% drop for all workers in the industry.

The reason to challenge this is not simply an ethical one about boosting equality – there is a practical imperative. Concerns are rife, for example, that the likely restrictions on free movement of labour after Brexit will lead to a workforce shortage and threaten major infrastructure projects around the country.

Despite several national campaigns, recent research from Redrow suggested that 40% of male pupils receive advice on a career in construction, compared to 29% of young women.

Meanwhile, the growing number of women’s groups, among them organisations such as the National Association of Women in Construction and Women in Property, demonstrates how the sector’s female contingent is striving to improve networking and awareness-raising.

These issues provided the backdrop for a Construction Manager roundtable debate held recently at Loughborough University’s London campus. The event, involving eight ex-Loughborough students who graduated in different years (see panels) was jointly convened by Professor Jacqui Glass of the School of Civil and Building Engineering and member of the Construction Manager editorial advisory panel, and chaired by CM editor Denise Chevin.

With an even split between site-based and office-based roles, specialisms ranging from design management to procurement and energy efficiency, and roles including sub agent and site engineer, the debate was wide-ranging and lively. Responding to the over-arching question “Do women get a good deal in construction?”, the participants’ descriptions of their experiences so far and aspirations for the future give a candid reflection of the reality of being a woman in construction.

The debate opened with a general consensus that expectations of working in the sector had been exceeded. Claire Hull, procurement delivery manager at Tarmac, said she had “stumbled across” rather than planned a career in construction – something that she felt affected her perceptions: “I was never offered this as a career choice during my school days; I had to go off and find it myself – that’s maybe it why it’s exceeded my expectations.”

Several of those with office-based roles described how their expectations had been surpassed by, for example, design-managing prestigious projects or being encouraged to take the lead in meetings with clients. Several recent graduate recruits said they had not expected so many opportunities for travel on international projects so early in their careers.

Attitudes on and off site

Participants on the whole felt that their employers were supportive when it came to issues like career development, but almost all lamented the general lack of women in construction.

Others described negative perceptions of women – from contractors, for example. Maria Spyrou, energy efficiency manager for Marks & Spencer, said she had in the past encountered challenging attitudes while working on refurbishment projects. “I’m very often the only woman in a meeting. The attitude I’ve got is: ‘Are you sure you want to talk to me about a generator?’”

She recalled that certain male contractors “would not take notice of what I was saying – they would talk to my male line manager”. The problem was solved by her supportive manager who redirected questions to include her, signalling her prominent role and giving her the responsibility to lead meetings.

Discussion turned to what deal women get depending on whether they are site-based or not. Pooja Godhania, a site engineer at John Sisk & Son, “cannot imagine not being on site”, but pointed out that not all employers are aware of providing for a female workforce on site.

Godhania suggested “assumption and ignorance” explained practical hurdles, such as a lack of personal protective equipment designed for women. “Sometimes you just have to point out what is difficult, and why it is an issue. As we get more women in construction, these issues will improve.” She also reflected that attitudes reflected the wider treatment of women: “You will find sexist behaviour [anywhere], and it is no different on site.”

The roundtable heard that issues such as a lack of female toilets or sanitary bins are common. As one participant said, if a woman working on site has to leave the project several times a day to find a public lavatory, there is a strong productivity case – as well as a human rights case – for installing facilities.

All the women involved agreed that more action is needed to break the stereotype that construction is a man’s industry. One speaker with a site-based role recalled being asked by two different male managers on separate occasions if she had considered a position in planning or health and safety management “to get a better work-life balance”, with the implication that onsite work is not necessarily “female-friendly”. She said she was determined to remain on “the frontline”, as that is where she felt work was most rewarding.