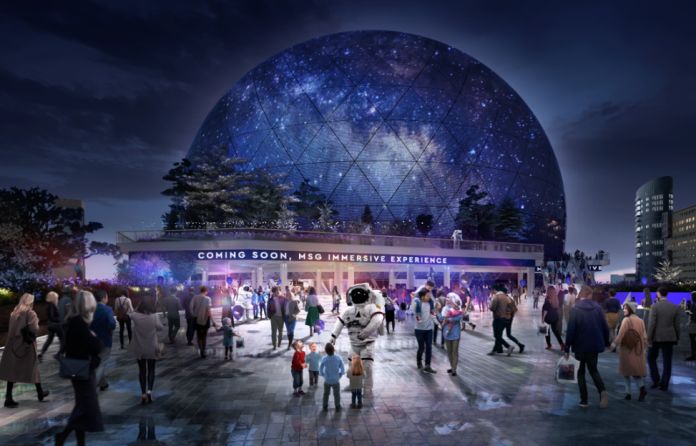 An artist’s impression of the MSG Sphere

The planned construction of a spherical 90m-tall London entertainment venue operated by the Madison Square Garden Company has been delayed.

Plans for the ‘MSG Sphere’, which would have a diameter of 120m and would be wrapped in triangular LED panels to showcase static and moving images, emerged in March this year.

It would be built on a 4.7-acre site in Stratford which has been left empty for more than six years since last being used as a temporary coach park during the 2012 Olympic and Paralympic Games.

But the Madison Square Garden Company, which is planning a similar sphere in Las Vegas to open in 2021, said that the planning process for the London venue would now run into 2020.

In a statement, it said: “The company also remains focused on incorporating learnings from its Las Vegas project in London. For these reasons, it is no longer possible for the London venue opening to be one year after the opening of MSG Sphere in Las Vegas.”

The fully-programmable exterior of the sphere in London would enable “complete control” over the light emitted by the building – including the ability to dim, turn on, or turn off all, or portions of, the exterior.

Inside, the main venue would have a scalable capacity of up to 17,500 seated, or 21,500 when there is a mix of seated and standing. It would also feature the largest and highest-resolution LED screen in the world, a haptic flooring system that will convey bass through the floor and wireless connectivity that delivers 25 megabits per second for every guest.

In addition to the main venue, the plans for MSG Sphere feature a smaller music club/nightclub, retail space, a café, restaurants, and outdoor spaces.

It is expected to take three years to build and create 4,300 construction jobs, although no contractor has yet been appointed.