Two new sets of regulations could result in fines of thousands of pounds and prosecution for industry professionals and businesses if Japanese knotweed and other invasive weeds are not managed appropriately and in a timely fashion (see below).

The new Invasive Alien Species Regulation 2014, which came into force in January, obliges member states to control and manage invasive alien species in the European Union.

The regulations class Japanese knotweed in the same bracket as the grey squirrel, the mitten crab, wild boar and the signal crayfish, which means that anyone responsible for introducing, keeping, selling or releasing them into the wild could face a fine or imprisonment.

Under the new regulations, government agencies will have the power to issue control orders that require the removal of high-risk invasive weed species from specified sites, which could include housing projects and neighbouring properties.

The full list of high-risk species is still to be finalised by the European Commission. Max Wade, a technical director at Aecom and chairman of the Property Care Association’s Invasive Weed Control Group, will be following the directive’s evolution closely, so that measures for dealing with any implications of the new regulations can be integrated into the association’s training, services and advice.

Another development relevant to invasive weed control also has implications for the construction sector. Part 4 of the new Anti-social Behaviour, Crime and Policing Act 2014 has introduced community protection notices, which could be issued by local authorities or the police to force landowners to deal with Japanese knotweed and other non-native invasive plants. It allows fines of up to £20,000 to be imposed on companies that fail to tackle the problem. Individuals would also be forced to comply, or face a fine of up to £2,500.

Although the act does not explicitly refer to invasive non-native plants, accompanying Home Office guidance makes it clear that failure to control them could be considered anti-social behaviour. This is primarily because of the impact that plants such as Japanese knotweed can have on property values and owners’ ability to sell their properties.

Community protection notices, which are intended to be flexible in scope, could be issued if a person or an organisation’s unreasonable conduct is having a continuing detrimental effect on the quality of life of those in the locality. This could include failing to control invasive plants on a property, or allowing them to spread from a property.

Invasive weeds of particular concern are already listed in schedule 9 of the Wildlife and Countryside Act 1981. So, although there is no legal requirement to control them, it is an offence to cause the plants listed to grow in the wild.

Section 14(2) of the act states: “If any person plants or otherwise causes to grow in the wild any plant which is included in part 2 of schedule 9, he shall be guilty of an offence.” In fact, anyone convicted of an offence under section 14 of the Wildlife and Countryside Act 1981 may face a fine of £5,000 and/or six months’ imprisonment, or two years’ imprisonment and/or an unlimited fine on indictment.

The Invasive Weed Control Group of the Property Care Association

The association offers training to help construction professionals deal with the problem of invasive weeds.

There are two levels of certification and the training is relevant to those in the invasive weed control industry, and in construction and development, surveying, horticulture, ecology and land remediation.

The association has also launched a course to enable professionals in local authorities to identify Japanese knotweed and develop strategies for its control and eradication.

In addition, it has published targeted guidance, including its code of practice for the management of Japanese knotweed.

The association also worked with Japanese knotweed control companies in the UK to set up the Invasive Weed Control Group in 2012 alongside the RICS, supported by the Council of Mortgage Lenders and the Building Societies Association.

For details go to www.property-care.org

Additionally, for some species, such as Japanese knotweed, plant material removed off site is regarded as controlled waste and comes under part II of the Environmental Protection Act 1990. Any soil or plant material contaminated with Japanese knotweed that you discard, intend to discard or are required to discard is likely to be classified as controlled waste.

But the new European directive adds a further legal dimension, says Professor Wade, who, in his 15 years of involvement in the management of invasive species, has contributed to the development of a more proactive approach to these troublesome plants.

“The EU regulations represent an important change in emphasis and involve using risk-based assessments linked to avoidance and preventative measures, as well as identifying and cutting off pathways of spread,” he explains.

“This biosecurity approach emerging from government and the EU points the direction invasive weed control is going. Just as in Scotland, it is anticipated that England, Wales and Northern Ireland will be subject to control orders that require landowners to deal with a given weed or weeds.”

The Property Care Association predicts the new regulations will bring about a greater focus on protection against the spread of Japanese knotweed and other invasive species as part of the construction process. Development sites provide a fertile environment for invasive species, so it is important that those in the industry are aware of the issue.

The association believes that the problem can be managed and contained, particularly if construction professionals are alert to it from the beginning. For instance, a member company recently visited a site that had become overrun with Japanese knotweed.

For construction teams, carrying out a specialist survey to identify invasive species on site well in advance of development can help to reduce the risks associated with Japanese knotweed and other schedule 9 species.

It is important for construction managers to be aware of the presence of invasive species on their sites – if they are inadvertently spread, development can be delayed, remedial costs can increase rapidly, and developers can open themselves up to prosecution and bad publicity.

Once an invasive weed is identified, a management plan can be put in place and control can get under way. 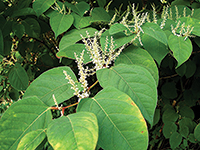 Japanese knotweed is a problem in most of the UK. It is particularly abundant in cities.

The species arrived in Great Britain in 1825 as an ornamental plant used in large gardens because of its imposing size and sprays of white flowers. By 2000, it was everywhere.

The plant does not produce viable seeds in Great Britain and Ireland. It spreads through fragments of underground stem (rhizomes) and, occasionally, from freshly cut stems.

The National House Building Council recognised the threat to buildings and other structures posed by Japanese knotweed in the early 1990s. But it was not until this century that the threat was considered “significant“.

The Department for Environment, Food and Rural Affairs advises Japanese knotweed is fenced off on sites. There should be clear signs, so only appropriately briefed personnel enter the enclosure to deal with the infestation and waste. This includes areas with waste plant material or soil contaminated with the plant. Rhizomes are classified as controlled waste.

Tracked vehicles must not be used in the affected area and vehicles leaving the site should be pressure-washed.

It is an offence to facilitate the spread of Japanese knotweed in the wild in the UK and Ireland. 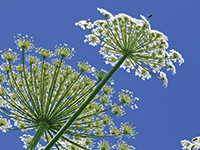 Giant hogweed was introduced to Great Britain and Ireland from south-west Asia as an ornamental plant in the middle of the 19th century.

It soon escaped captivity, aided by its prolific seed production (as many as 50,000 per plant), and is now widespread. It spreads solely by seed, through wind dispersal, water courses and transported topsoil. Seeds are classified as controlled waste.

Giant hogweed is an issue in most parts of the UK, but is most prevalent in the south-west – this may change as climate change impacts take effect.

It can cause delays and additional costs on development sites and must be removed as controlled waste.

Giant hogweed sap is also highly toxic to the skin in sunlight, making it a serious danger to public health. Contact with any part of the plant, followed by exposure to sunlight, can cause severe blistering to the skin and discomfort. Symptoms appear after about an hour but the consequences can last for years. There have been reports of blindness resulting when young children play with the plant’s hollow stalks as telescopes.

It is an offence to facilitate the spread of giant hogweed in the wild in Great Britain and Northern Ireland.

Himalayan balsam is well established and extremely invasive throughout most of lowland UK, but is less prevalent in upland areas. It is considered to have a high impact, and can spread rapidly on the soft banks of water courses, where its presence can exclude most other plants and in times of flood, impede the flow of water.

Now answer the CPD questions (please note you must register or sign in first):