Robert Halfon was appointed minister for apprenticeships and skills in Theresa May’s new government line-up. Gary Sullivan has a message for him. 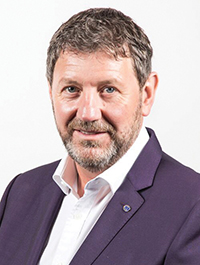 Dear Mr Halfon, congratulations on your appointment as a minister. I am sure with your passion for apprenticeships and your support for the principle of trade union membership and workers’ rights you will find yourself at some point struggling to resolve the conundrum that is the construction skills crisis.

Perhaps I can I give you some food for thought. I won’t rehearse all the issues that construction faces, however a start point is that, despite headlines to the contrary, there is no homogeneous construction industry. Rarely will the guy who rebuilds your garden wall or builds your extension be the same individual as the person who fits the cladding on a 40-storey tower or the roof on a new airport terminal.

I say the guy, but of course it could just as easily be a female – although it is more likely to be a man as we are still failing to attract women into our dynamic and vibrant industry. As construction is not one homogeneous industry, clearly the answer will be as complex as building, say, a nuclear power station.

Now I hear you and your advisers shouting apprenticeships, and of course they are important. However, they need to be relevant and fit for purpose for 21st century construction – notwithstanding that we will always need someone to build an inglenook fireplace or rewire those beautiful 16th century homes in the countryside of north-west Essex.

In the world of developers such as Stanhope, British Land and Lipton Rogers, we need more builders. Or should I rephrase that: we need more than builders. We need to manufacture off site, we need people with good hand-to-eye co-ordination, we need people who can use state-of-the-art tools who can produce quality at speed again and again.

While the CITB cannot be blamed for all the issues that we face by not having a fully skilled workforce, it has been at it since 1964 and uses the 400,000-plus shortfall as a reason for continuing to exist.

Is there any correlation between construction and the UK car industry of the 1960s and 70s? With falling productivity and ancient working practices, poor quality and the failure to embrace emerging technologies sent many household names to the wall. Similarly, construction has lost big names – such as Trollope & Colls, Bovis Construction, Wimpey and more, all of which had their own workforce, which they trained.

The circle is more vicarious than virtuous, in that the clients will tell you the supply chain doesn’t have the skills to enable them to procure differently. The supply chain will tell you it doesn’t have the pipeline to allow it to invest in developing the skills of the future. In the middle are the Tier 1 principal contractors, trying to manage both client and supplier – the meat or the cheese in the sandwich, so to speak.

More importantly it will need someone to help them get there. You can push back to the market, but political leadership is still required, more than ever post-Brexit.

We need to train differently, get people in at ground level and get them working. We could look at how the military train young people. In less than 18 weeks they produce the highest skill levels with technical expertise and a great work ethic. We have to invest in off-site manufacturing and in parallel train the workforce to fit, erect and plug in the state-of-the-art products created in factories in our Northern Powerhouse. Our ambition should be more F1 than 1961.