The Qingdao 3D printer is currently sited in the High-tech Zone of local 3D Printing Industrial Park and will be open to the public. Its first task is to print a 7m high “Temple of Heaven”, the largest extant sacrificial temple in China.

3D printing: it’s the shape of things to come

One notable advantage of this new printer is its use of graphene glass fibre reinforced plastic as 3D printing material, which is lightweight, strong, corrosion-resistant and environmentally friendly.

According to Wang Hong, Qingdao’s founder and CEO, the company has spent the last six months developing this giant printer which has a build volume of 12m x 12m x 12m. It weighs more than 120 tons and was assembled using cranes and other machines, reported 3ders.org.

In April another Chinese firm, the Shanghai WinSun Decoration Design Engineering Co released images of its new type of printed house, of which it made 10 in a day. Unlike the 3D printed house taking shape in the north of Amsterdam by Dutch architect DUS, which is being built over the next three years from a printed set of rooms, the Chinese homes are assembled from a series of printed components. 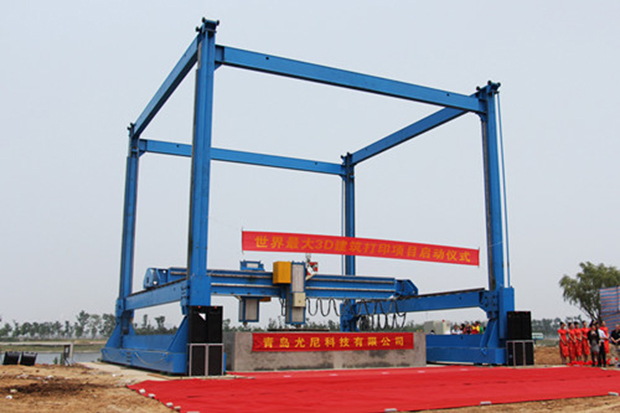 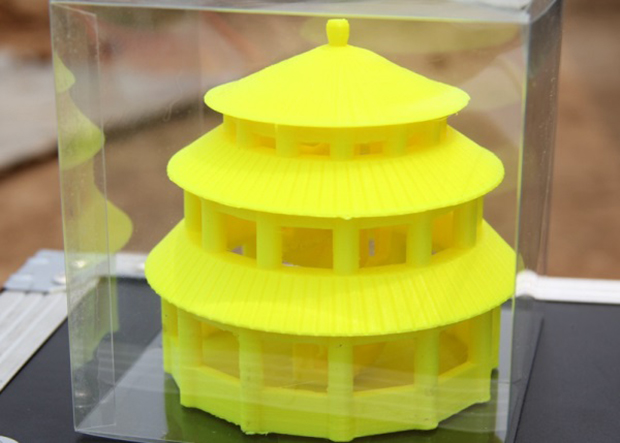 The 3D printed Temple of Heaven will have floor space of 100 sq m and will consume 20 tons of material, a mixture of 8 tons of new material and 12 tons of concrete. “Traditionally you need at least 150 tons of concrete to build such a structure,” Wang told 3ders.org.

“It will take at least six to eight months to build up the structure layer by layer, just like building a house. Once built, it will become the world’s biggest structure constructed by 3D printing technology.

“Compared to the 3D printer the Dutch Architects used for the Canal House in Amsterdam last year, the size of this 3D building printer expands nearly three times,” explained Qingdao. The company said that its printer is able to print entire building in one print job, rather than printing out pieces and then bonding them together. In addition, the company believes its 3D printed building are three times as strong because they use graphene glass fiber reinforced plastic as printing material.