A government-backed report published yesterday calls for action to address the poor installation standards, inadequate regulations and lack of workable funding initiatives that have shrunk the market for solid wall insulation – a missing link in the UK’s carbon cutting agenda.

Solid Wall Insulation: Unlocking demand and driving up standards was written by the government’s chief construction adviser Peter Hansford at the request of the Green Construction Board.

It responds to the declining number of installations as the Green Deal has faded and the Energy Companies Obligation scheme has shrunk, and worrying evidence that SWI measures are so technically poor that they create more problems than they solve.

The BRE’s chief executive Peter Bonfield, midway through his own review of the post-Green Deal energy efficiency market, backed the report’s recommendation but also called on the industry to take action to a faster timetable than it sets out.

And he also suggested that there was a mood in the industry and government to shift to a regime of tighter regulation on SWI and other energy-saving retrofits, backed by incentive measures. 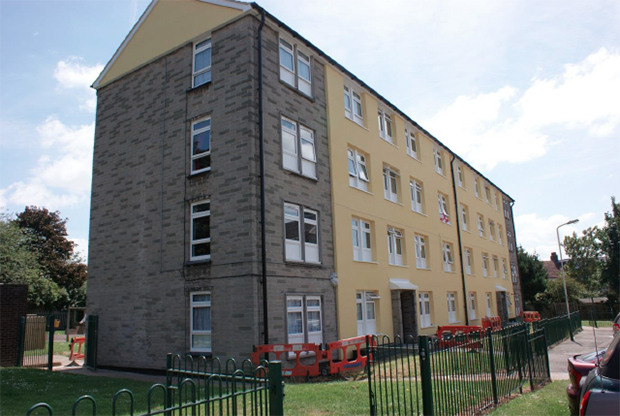 While retrofit solid wall insulation is relatively common elsewhere in Europe, in the UK it is a fringe activity

Bonfield said: “The industry has been let down by people who aren’t competent and aren’t policed properly. It feels like this is the moment where enough things have gone wrong to harness the collective energy and to ask what it takes to make things better.”

But responding to the report’s call for a new industry “leadership forum” to be convened by the end of 2016, Bonfield said that he intended to establish a new group of within four weeks to look at how the market for SWI can be rebuilt.

The report identified that there are 15.5 million homes in the UK – out of a total of 26 million – without cavity walls. Of these, 3.5 million fall into categories that are most suitable for SWI, predominantly representing older housing stock built pre-1964.

But while retrofit SWI is relatively common elsewhere in Europe, in the UK it is a fringe activity. Before April 2012, it’s estimated that only 132,000 homes had had SWI retrofits. This was followed by a period of increased activity funded by the ECO policy, with 77,000 homes tackled between April 2012 and July 2013. But since then, installations of SWI have reduced.

"It’s been poorly applied in inappropriate situations with an insufficient level of skills. We want to give the industry a consistent framework under which it can grow, and drive up standards and expertise."

The report suggests that 75% of the suitable properties are in the owner-occupier sector, 10% are owned by local authorities and 15% by housing associations.

At the same time, it has become evident that a significant minority of installations are so poorly implemented that they are in fact introducing moisture to the home, creating mould and health issues.

The report drew on evidence from BRE Wales director Colin King, who is shortly to publish a report documenting an epidemic of faulty SWI installations across Wales, most in the social housing sector.

Hansford told Construction Manager: “It’s been poorly applied in inappropriate situations with an insufficient level of skills. We want to give the industry a consistent framework under which it can grow, and drive up standards and expertise.

“The scale of the problem [of poor quality installations] is quite widespread, you hear horror stories and Colin King has a whole catalogue of poor installations.”

The report was welcomed across the industry, but commentators recognised the scale of the challenge.

Paul Everall, chief executive of Local Authority Building Control, said: "We think the standard of workmanship has dropped – one issue with giving governemnt grants [under Green Deal and ECO] is that it tends to lead to cowboy builders.

"Certainly we should see if the building regulations need tightening up [as recommended by the report] but ultimately it’s about checking compliance. The report ought to be a trigger to look at the recommnedations, so it will be interesting to see if it gets a government response, or sits on the shelf."

Peter Caplehorn, deputy chief executive and head of policy at the Construction Products Association, said:"There are problems right across the whole subject – problems with finance, technical installation, with compliance, and the policy principles ebb and flow. There is undoubtedly a need for leadership, but we also need robust checking and sensible regulations – a lot of people think that PAS 2030 [the Green Deal compliance standard] doesn’t really do the job."

But he added that the industry was weary of backing sustainability policy initiatives that don’t grow market opportunities, such as the Green Deal and zero carbon homes.

“A lot of people involved in previous schemes are disenchanted and have lost huge amounts of money, so people who have been in that position might not want to support anything else – it’s a  real lead weight around the industry and it’s got to be recognised.”

Hansford said that he hoped to have an official response to the report from the DCLG within three months.