A group at Arup has come up with an imaginative and ambitious way to get architects and engineers fired up about BIM. It is using everyday BIM technology to model the human body and show what can be achieved with the software available.

The designers driving Project OVE, as the demonstration project is called, came up with the idea to present at a major conference run by Autodesk.

“The idea is the building is in the form of a human body and then the services represent the body’s organs and functions,” explains Arup associate Casey Rutland.

“The HVAC system represents the lungs, the pump system the heart and circulatory system, electrical system the nerves and the building management system is the brain, and so on. We’ve put it together with a bit of humour.”

He says the structural solution is based on the Gherkin, for which Arup was the engineer, and its diagrid engineering concept was applied to a model based upon a laser scan of a human body.

“It took seven weeks to build the model in its basic form, but the idea has really captured the imagination of architects and engineers across Arup and Arup Associates,” Rutland told CM. “The Fire Engineering group have joined in to look at modelling smoke movement around the ‘body’. They will incorporate sprinkler systems into the model to make the human body sweat. Our facade specialists want to see how the ‘skin’ works in different climates.”

He added: “At Arup we’ve done a great deal of development on other systems for clients but often that is work we cannot share openly. We can show this to anyone. We’ve created a freely available data set and therefore a really useful tool. All the software is capable of talking the same language.”

“We’ve learnt a great deal from the exercise, in particular we’ve documented workflows from these case studies for other teams to implement on their own projects. 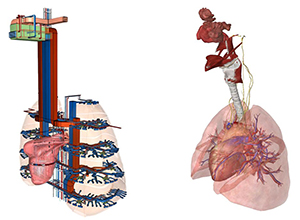 "The HVAC system represents the lungs, the pump system the heart and circulatory system, electrical system the nerves and the building management system is the brain, and so on. We’ve put it together with a bit of humour."

“Arup has a number of projects that demonstrate advanced BIM solutions, but capturing best practice examples that articulate exactly how BIM provides tangible value on projects is a challenge.”

Throughout the project, the development team stuck to three main principles, which were to:

Rutland says the team has learnt and developed a great deal that can now be applied to real buildings. “In modelling the structural systems we’ve used tried and tested methods as a basis, but made them smarter, more flexible and improved our workflows allowing complex design modifications to be made, analysed, optimised and coordinated with other disciplines in a matter of minutes.

“Through a process of adding intelligence into the MEP system components, the whole ‘building’ is now capable of automatically calculating required loads, outputs, duct and pipe sizing, acoustic criteria and so on. This is a huge saving in time and resource requirements and enables the team to focus on the ‘clever’ design solutions.”